Categories Menu
Home » Blog » On This Day: The Soviet Invasion of Czechoslovakia

On This Day: The Soviet Invasion of Czechoslovakia

I’m getting into the “dog ate my homework” phase of delayed blog posts. However, the Russian invasion of Ukraine, which will approach its sixth month later this week, brings back memories of past incursions by the Bad Bear. On August 21, 1968, Soviet forces crossed the border into Czechoslovakia along with troops and tanks from Warsaw Pact nations Poland, Bulgaria, and Hungary. Their purpose was to stop the reforms implemented by the Czechoslovakia Communist Party and its General Secretary Alexander Dubček. Soviet leaders feared a liberalizing Czechoslovakia would ultimately leave the Soviet orbit and become a neutral nation like neighbor Austria. This seems to be a pattern of the paranoid Russian leadership, which has tried to use potential Ukrainian membership in NATO as justification for its unprovoked and criminal war. 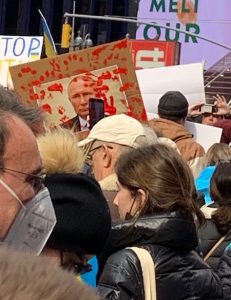 Not losing sight of who’s responsible.

Unlike the Ukrainians, however, the Czechoslovak people put up little resistance to the invasion. The self-immolation of Charles University student Jan Palach in January 1969 — the event on which my forthcoming YA novel Torch is based — was not primarily an act of protest against the occupation but against the passivity of the Czech and Slovak people in the face of the occupation. Faced with little resistance, the Soviet masters and their Czechoslovak puppets reimposed strict censorship, purged the communist party of all reformers, fired alleged dissidents from their jobs, and expelled dissident youth from universities and secondary schools. Many people ended up in prison over the next decade, among them the playwright Václav Havel, who in 1989 would become the country’s first democratic president after the Velvet Revolution and the fall of communism. The submission of the people lasted almost two decades, but it didn’t last forever.

Given these circumstances, what forms of resistance remained for an oppressed people following the invasion of August 21, 1968? Basically, emigration. The chaos of the following months meant that border crossings were not enforced as strongly as they typically were under the years of the Iron Curtain. Hundreds of thousands of people left the country, most of them young people and educated professionals. Their departure created a massive brain drain that set the country back culturally and technologically. Depriving a repressive nation of the talents of the best and brightest is itself a form of resistance, one that hurts everyone. 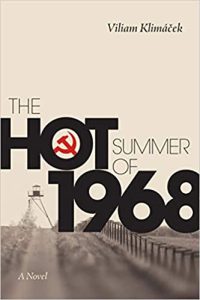 Including many of those who emigrate. In researching Torch, I read a novel by Slovak playwright and author Viliam Klimáček, The Hot Summer of 1968. Translated by Peter Petro, it’s based on oral histories of Slovaks, some living in Bratislava and others in smaller cities to the east, who lived through the Soviet invasion and had to choose whether or not to leave the country. One of the principal characters is a gifted young medical school student who flees the country with her father and then spends years in Canada trying to get her license to practice medicine there. Her father, uprooted from friends and family, deteriorates mentally and physically, as does her mother who is left behind alone to face the retribution of the authorities because her husband and daughter decamped. The father’s best friend accompanies his rebellious teenage daughter on a train to Vienna, where she will stay with distant relatives, and dies of a broken heart on the return trip, leaving behind a widow and 12-year-old son.

In the wake of these tragedies, we see the resistance of Ukraine in a new light. Yet the brutality of the Russian invaders is meant as a kind of example to anyone who dares to stand up to an international bully. Is it better to die on one’s feet or live on one’s knees? For those of us in the United States, facing an entire political party dedicated to the abrogation of democracy and the consignment of the majority of the population to living on bended knees, it’s important not to get into this situation in the first place.