Jonah and Reed are one year old! They reached this milestone in July, when we were all on vacation and my Facebook account was crumpled in the virtual trashcan. As a result, I didn’t post pictures or stories about their birthday celebration, or the pre-birthday celebration Lindsey organized on our family trip to Vermont. But we have pictures now! 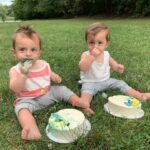 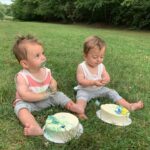 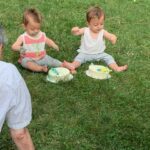 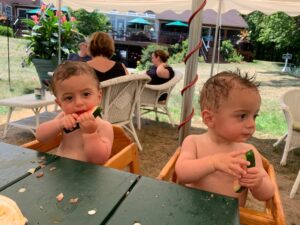 Jonah (left) and Reed on vacation.

Two nights ago, Richard and I babysat the twins while their parents attended the US Open tennis tournament. As time has flown, they’re now thirteen months old and doing new things every day. Both are crawling, though Reed’s is more of a standard crawl while Jonah scoots on his stomach. They pull up to a standing position, sit down, and pull up again. They walk a few steps holding on. I expect they will walk without holding on soon. They are truly toddlers. 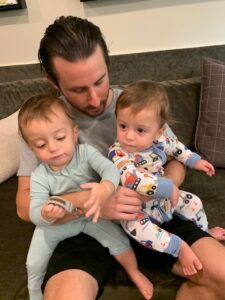 I read much online about a certain ex-president who, it is alleged, acts like a toddler. Not like these toddlers, though. While their personalities are different, Jonah and Reed are sweet, good-humored little boys who play well with each other and rarely squabble over a toy. Being twins and growing up with each other for company — especially crucial in a deadly pandemic that has isolated people and families — they have well-developed social skills. They may be attracted to a toy their sibling is enjoying, but they’re also very good at finding an alternative toy or activity. They rarely cry, and when they do, it’s for a good reason — hungry or overtired, or fell over and got a boo-boo while trying to stand and walk. They love music and books. When Reed pushes the button on the electronic Elmo with the guitar, Jonah dances to the tune. They love hearing stories and turn the pages of their board books while babbling. 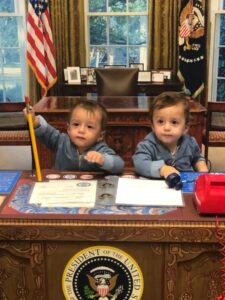 At a children’s museum, co-presidents.

After coming back early from Long Island last week because of Hurricane Henri, Derrick and Lindsey took the boys to a small children’s museum on the Upper West Side where they got to play co-presidents. Reed signed legislation while Jonah kept in touch with foreign dignitaries via the red phone. There has been a case in recent history of identical twins serving as informal co-presidents. Unfortunately, it did not turn out so well, and it may also serve as an argument for not exploiting these adorable accidents of nature for the purposes of mass entertainment during their childhood, lest they become traumatized and turn to the side of evil as adults.

Jonah and Reed are growing up on their own schedule and seem to be having a good time in the process. Although the number of photos we take is fewer than in their first year, we continue to document their adventures, and one day, they will look back at these moments they were too young to remember. 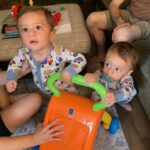 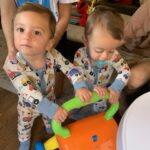