I blog a lot about the writer’s journey. But I’m not the only person who has a story and advice. From time to time, I ask friends with recent books to talk about their journey — when they started writing, when they first thought about getting published, and their mostly winding roads to publication.

Today, PJ McIlvaine, another member of the #PBKrewe (which started as the Picture Book Krewe and is now the Phenomenal Books Krewe because a lot of us don’t have picture books) shares her story. A prolific author/screenwriter/writer/journalist. PJ’s had two picture books published and is under contract for four more (2023-2024). Her debut middle-grade supernatural historical novel, Violet Yorke, Gilded Girl: Ghosts in the Closet (Darkstroke Books, 2022), is about a strong-willed poor little rich girl set in 1912 NYC. PJ is also a co-host and founding member of #PBPitch, the premiere Twitter pitch party for picture book creators. PJ has been published in numerous outlets including The New York Times and Newsday, and is a regular contributor for The Children’s Book Insider newsletter (paid firewall), writing about the path to publication. Also, PJ’s critically acclaimed Showtime original family movie My Horrible Year, with Mimi Rogers, Karen Allen, and Eric Stoltz, was nominated for a Daytime Emmy. PJ lives in Eastern Long Island with her family, Potato Head Luna (a French Bulldog), and Sasha the Psycho Cat.

Short story: I loved Trixie Belden as a kid. 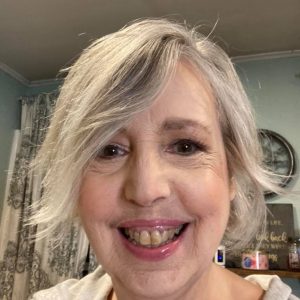 Now who in the heck was Trixie Belden, you might ask? And rightly so. Because at the risk of dating myself, Trixie Belden back in the day was cooler than Nancy Drew. Trixie lived on a farm in rural upstate New York. Aided and abetted by Honey, her BFF who was also a poor little rich girl, Trixie stayed forever young and got into all kinds of mayhem, mischief, and misadventures. I’d cajole my grandparents into buying Trixie mysteries off the book display at the local stationery store. A voracious reader, I’d gobble the Belden books over summer vacation. And as I read, I was also green around the gills: why couldn’t I be like Trixie and have all kinds of exciting escapades? Undaunted, I wrote my own book, now lost, on a portable typewriter. I got to maybe sixty, eight pages before my creativity petered out like wilted flowers. While I don’t recall exactly what the book was about, I remember feeling quite proud of myself. I could be like Trixie one day! Or a reasonable facsimile.

Years passed. I had kids. I had adventures, some good, some not so good. Well, if I’m being completely honest, nothing quite on par as Trixie and The Mystery of the Blinking Eye. But in my head I had all sorts of crazy adventures. Even so, I never forgot Trixie. The feisty teen of my childhood had instilled in me not only a love of reading but also of writing. I had articles, stories, and interviews published. I had a screenplay produced, to some acclaim. But a book, well, that was a different kettle of fish entirely. I remember going into bookstores with my kids and eyeing all the wonderful books on display and my stomach would knot like a pretzel. One day, I promised myself. One day. 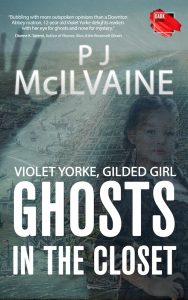 When my mother eventually passed away, I had an epiphany: one day was now. I wish that I could say that I had a wild outburst of inspiration for my debut middle-grade supernatural historical mystery novel, Violet Yorke, Gilded Girl: Ghosts in the Closet (Darkstroke Books, Amazon Kindle, publication date April 4, 2022).  But the truth is, I was knee-deep in writing and revising two other books when this poor little rich girl with a penchant for trouble popped into my imagination and wouldn’t let me go. I knew without having to think twice that Violet lived in 1912 Manhattan in the final breaths of the famed Gilded Age, a time when high society and its rigid rules still reigned but were quickly being overrun by reform and progressive ideas. Once I had the central character firmly rooted in my mind, everything else fell into place rather quickly. I pretty much wrote Violet concurrently with my other works in progress.

But make no mistake. The seeds of Violet were sown by Trixie: a strong, independent, determined (some would say stubborn), curious heroine surrounded by a robust, diverse cast of supporting characters who become entangled in Violet’s antics and misdeeds, much to their annoyance.

So when Violet Yorke found a home after a publisher liked my elevator pitch at a Twitter event, it was after months of querying (patience, which Violet has yet to master). I never gave up (persistence, which Violet has in abundance). Along the way, there were highs and lows and many potholes in the road (which wouldn’t have bothered Violet in the slightest. The faster the car and the bumpier the ride, the better). Violet and her staid, conventional Grandmother had tea at four; after a particularly rough day in the writing/query trenches, I’d indulge in a heaping bowl of vanilla ice cream at nine.

Long story: Violet Yorke is everything I loved in books as a kid growing up in suburban eastern Long Island. And even though Violet grew up in an era where indoor plumbing and electricity were considered novelties and only for the rich and powerful, and cell phones, the internet, and Tik Tok were dots in the distant future, as kids–as readers–no matter our age, we still yearn to escape, to have secrets, to hope, to have adventures without grumpy elders spoiling it, and to be scared a little (or maybe a lot). I know I do.