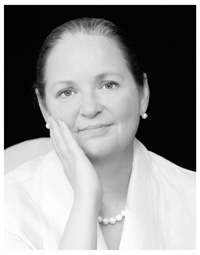 I met Patrice Kindl five years ago at a book festival, where she was gathering books and money to help schools and libraries in her area that had suffered extensive water damage from Hurricane Irene’s floodwaters. Not only is she a noted advocate for reading and libraries; she is also a gifted author of historical fantasy. Among her acclaimed books are Keeping the Castle and A School for Brides. I attended and reported on her launch of A School for Brides and was excited to hear about her new novel for teens, a contemporary thriller that features a young sociopath. Don’t You Trust Me? is coming out this month, and Patrice, who appreciated my “Evil Wins” post on Phillippe Diederich’s Playing for the Devil’s Fire, offered to write a piece about the ways in which her novel addresses this topic. Her letter to parents argues for books that explore evil in an honest way, not holding back or sugarcoating the fact that sometimes, evil really does win. 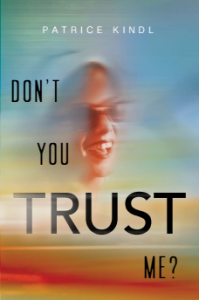 Here’s a summary of Don’t You Trust Me? from IndieBound:

A teenage girl switches identities with a stranger and pulls off a long-term scam in this smart, sarcastic thriller perfect for fans of Ally Carter.

Don t you trust me? I mean, look at me. Blond, blue-eyed, the very image of innocence. Pretty enough, if you care about that kind of thing. I don t.

But would a normal person switch identities with some wet mess of a girl at the airport, just to get her to stop bawling about being separated from her loser boyfriend and sent to live with some distant relatives? Nope, she wouldn t. Yet I did. I m not as normal as you think. And you ll just have to trust me on that.

TO PARENTS: Writing For Teens About Very Bad People

Why on earth would anybody want to write a book for teens narrated by a psychopath?

That’s the question I’m waiting to hear from parents about my new novel, Don’t You Trust Me? Okay, so there may be people like that in the world, but what’s the point of having teens from loving families in good neighborhoods learn about them? Why not wait until they are adults to read this sort of sensational literature?

It is estimated that one in every hundred Americans falls within the spectrum of psychopathy, (or, as it is clinically known, “antisocial personality disorder” – or, before age 18, “conduct disorder.”) As adults, craving excitement and stimulation, they tend to congregate in cities. But they are born into families from every socioeconomic level and geographic locale. In other words, in your neighborhood and school district.

In the teen and early adult years, when the young are learning to survive and thrive outside of the close circle of family, their lack of social sophistication makes them almost uniquely vulnerable to the suasions of someone who is a born manipulator. Many teens are idealistic, and that is a wonderful thing, but it does not prepare them for the fact that one of their peers may have no empathy and no moral compass. When a friend – whether platonic or romantic – lies, and cheats and lies some more, many teens will want to believe, to forgive, and to trust someone who does not deserve to be believed or forgiven or trusted.

So, why write about a teen psychopath? Quite honestly? Because it was both fascinating and fun. But also because: Doesn’t your teen deserve to know that they exist? Shouldn’t they know that the friend whose excuses are so plausible, who is so flattering and entertaining and emotionally seductive, yet who always seems to let them down in the end – shouldn’t they know that that “friend” might regard them as more of a sucker than a soul mate?

Update: Patrice has generously offered to give away a copy of Don’t You Trust Me? to one lucky person who comments. The drawing will be held at 11:59 pm on Wednesday, September 14.