Little Brick Township is moving again! After five years on our lively corner of Alphabet City, on the border of the East Village and the Lower East Side, we’ve found a new place near Union Square. No, the six bars on our block didn’t drive us out; in fact, they contributed to the neighborhood’s “stylishly scruffy” atmosphere and kept us young. We will miss the old neighborhood. But nearly every subway line runs near our new location, so instead of being dependent on one line, the city’s least reliable, to get to the bus station for his trip to Albany, Richard has multiple alternatives. It means a half hour more sleep every day he goes to teach, and returning home before midnight.

For me, the benefit is a separate bedroom for my writing desk and Little Brick Township, shared with a guest bed. Although the town will be restricted to the same three tables pushed together, built-in bookshelves in the living room mean I can dedicate all four of my sturdy green bookshelves to additional displays. The township’s train station will now occupy a lower level, with underground tracks like Grand Central and Penn Stations. I’ve always dreamed of having a full Lego railroad track, which I can now set up under two of the tables once I stop using that space for storage and find lower tables to hold the tracks. 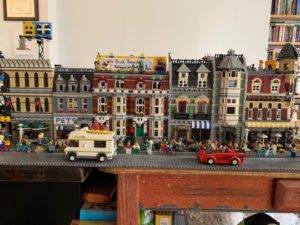 Right now, though, I’m in the process of separating the buildings, shrink-wrapping them, and granny-karting them in boxes, one by one, the 14 blocks from our old place to our new one. I have about five large constructions left — three Little Brick Township buildings, a Ninjago City that I built for my daughter’s classroom but then found out there was no room to display it, and a Ferris Wheel my brother sent me that I modified from micro to minifigure scale. After several dozen trips already on rough sidewalks, the wheels of the heavy-duty granny kart are coming apart, so it’s going to be a race to see if it falls apart before the entire town has been moved. (If the kart goes first, I’ll box the remaining constructions and use a rideshare, since they’ll all fit in one trip by now.) My closets in the new place are full of buildings awaiting their companions, and I promise photos once we make our final move.

…meets the reality of the Potemkin Village.

Last week I photographed the buildings that remained at the time. From one angle, it resembles my complete town, but if I raise the camera angle, it becomes evident that nothing is left behind that main street of original Modular buildings. That’s what’s called a Potemkin Village, a staged set-up designed to convey much more that what actually exists. I managed to impress people with that first photo, and it made me think of the time Richard and I took the kids to Universal Studios, and we saw the various sets of highly detailed buildings with only concrete supports behind them. The original Potemkin village, named for its builder, was built in 1787 in Crimea to impress his boss and lover Russian Tsarina Catherine II, giving her the impression that thriving communities existed instead of empty land and a handful of peasants’ huts. Like Little Brick Township, Grigory Potemkin’s villages were designed to be disassembled and reassembled in new locations to keep up the image. Except my town is real. And awesome. And in its new home, it has some room to grow.

A more detailed discussion of how I moved Little Brick Township even farther (though the town was smaller then and didn’t feature the MOCs I designed) is here. And you can read about my Modular MOCs here, here, and here.