A week ago I attended a meeting of the PEN Children’s Committee, which is starting a new writer-in-residence program in juvenile detention facilities in collaboration with Literacy for Incarcerated Teens (LIT). In the past, LIT has hosted award-winning authors of young adult literature to speak to the teens, but the new program would have the teens work with an author to produce their own personal essays and stories. Inspired and encouraged by my workshops for middle school students at the New Voices School in Brooklyn, I signed on to be the first PEN Children’s Committee member to offer the workshops for incarcerated youth. I’m now in the process of arranging the event, so more to come… 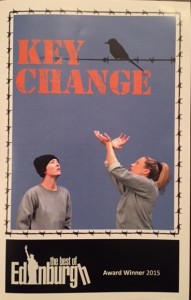 I left that meeting early to see a play at the Public Theater, several blocks from the PEN office. The play, chosen not entirely coincidentally, was Key Change, a portrait of five women in a prison in the UK. Focusing mainly on Lucy, a first timer in prison, and Angie, on her third sentence, the play explores the circumstances that have landed the women behind bars, the common threads of their lives, the families that loom large while they are away, and their hopes for the future. Playwright Catrina McHugh wrote Key Change in collaboration with inmates in a writing workshop at Low Newton Prison, a women’s prison near Durham, England. The inmate writers first created the character of Lucy, and then Angie as an edgier counterpoint. A third major character is Kim, a grandmother who Angie met at a women’s shelter and there introduced to heroin. The women reveal their different personalities and experiences (for instance, Angie became a heroin addict after giving birth at age 17 to a child who died soon after, while Lucy, who also had a child at 17 and then two more to an abusive husband, does not use drugs), but conflicts with parents, early childbearing, domestic abuse, and poverty unite them. 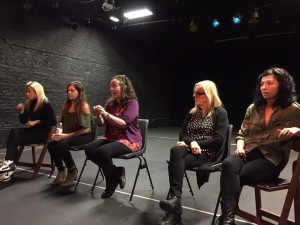 Before opening in the United States, Key Change won The Best of Edinburgh Fringe Festival, a richly deserved award for the play’s memorable characterizations and dialogue and spot-on choreography. It has been performed in various women’s, and men’s, prisons in the UK and before coming to the Public Theater was performed for women at the York Correctional Facility in Connecticut and at the Bedford Hills women’s prison in Westchester County, New York. In a Q & A after the performance, McHugh commented on the importance of performing the play in men’s prisons to highlight to them the widespread existence and harrowing effects of domestic violence. She felt the performances opened up a valuable dialogue there about violence against women.

Key Change pulls together a lot of threads in exploring how people come to end up in prison. One that she alludes to but does not explore as much as the others — in part because of her focus on women as the primary targets of domestic violence — is disability, specifically learning disabilities and mental health issues that contribute to academic failure, suspension and other forms of exclusion, and the School-to-Prison Pipeline. In Key Change, Angie describes a boy she befriended in primary school, Sammy, who could not sit still and refused to obey the teacher — a boy who came from a violent home but also had serious learning disabilities (and probably attention-deficit hyperactivity disorder as well). Angie and Sammy met again on the prisoner transport to their respective prisons and traded drugs.

I was moved and inspired by the women in prison who developed these characters and this story. It takes courage to face one’s past, but their creating this play with McHugh achieved the same kind of thing I wanted to do when I turned my own life into fiction in Rogue. The play succeeded in transforming suffering and struggle and bad decisions into something good — honest, memorable characters, vivid language, and a story that could resonate with others in the same situation and make connections with others through walls and barbed wire.