Proud of My “Students” 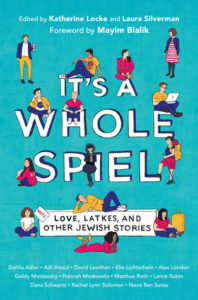 For 16 years I taught American Jewish history to seventh graders in a Sunday school in upstate New York. I don’t know if the students complained about waking up early on a weekend morning to attend classes, but they always seemed happy to be there, to see friends who lived in other parts of our far-flung region, and to learn more about their culture and faith. We teachers worked hard to create activities that would be of interest to preteens — group projects that inspired imagination and creativity (like role-playing the creation of a synagogue in colonial America, making posters of street scenes, building models, and writing class plays) and electives where students researched Jewish pop culture icons. I remember a student one year telling a non-Jewish friend visiting our class, “I like being Jewish. It’s something different.” Others appreciated a more creative curriculum when their social studies classes during the week became increasingly centered on testing and teaching to the test.

Born between 1986 and 2003, my students are part of the Millennial generation and the older cohort of Generation Z. So are the editors of and most of the contributors to the just-publishing collection of short stories for tweens and teens It’s a Whole Spiel: Love, Latkes, and Other Jewish Stories, edited by Katherine Locke and Laura Silverman. When I saw Katie, Laura, and six of their contributors last week at Books of Wonder, I thought of my students, of their creativity, friendships, and dedication to cultivating their Jewish identities. I felt so proud of them. 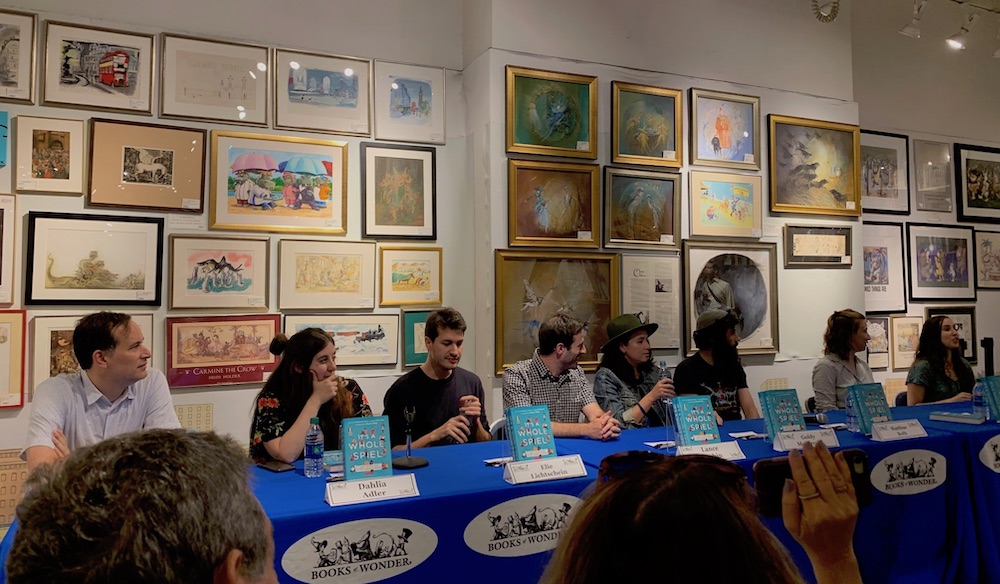 In their presentation to the standing-room-only crowd, Laura and Katie described the origins of the anthology. Drawing from the efforts of #WeNeedDiverseBooks, they wanted to portray the variety of Jewish experiences in the United States — secular, Reform, Conservative, and various Orthodox strands — and they wanted to focus on contemporary Jewish life. Too much of the literature (and the teaching of history as well) focuses on the Holocaust when Jewish experiences are diverse and joyful. 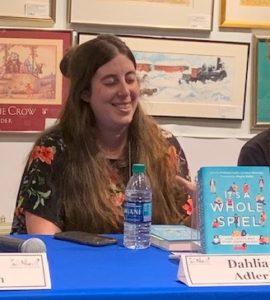 Dahlia Adler talked about the “rude awakening” of attending college after having grown up in a modern Orthodox family. Because she observes Shabbat, she felt that she didn’t belong when other students planned activities on Friday nights and Saturdays before sundown. Even now, she has to plan her festival attendance around her observance. But she is proud of who she is and her choice to maintain her traditions. Matthue Roth, who is also Orthodox, agreed. “Own it and be proud of it,” he said, noting that authors are used to addressing struggle and tension in their work, so why not in life as well? It’s great preparation for writing the story. 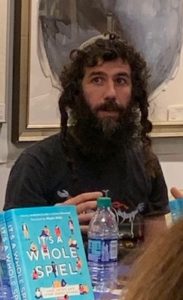 When the editors approached him, Lance Rubin was excited but worried that he didn’t count as Jewish. His parents didn’t observe, and his father became a Buddhist. He talked about the feeling of being “not Jewish enough.” Goldy Moldavsky, who is, like Dahlia, modern Orthodox, had a different concern. She didn’t consider herself a short story writer. However, she wanted to participate because she’d read too many outsiders writing about the Orthodox Jewish experience and getting it wrong. She saw the project as a safe space to talk about being Jewish and wanted readers to know that being Orthodoxd is “not about what we can’t do but about who I am.”

In his short story, Elie Lichtschein wanted to convey what it’s like to be a teenager who also happens to be Jewish. And David Levithan, the Gen X’er of the group, spoke about getting to write about something other than being gay, which is the writing for which he’s best known (and that’s an understatement!). 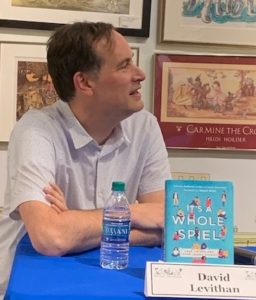 After each of the contributors spoke briefly about their own stories, Laura and Katie described the process of creating and editing the anthology, which they appreciated for its opportunity to dialogue with all the contributors. In all, there are 14 stories, so more than half of the contributors appeared at this event and signed books for the attendees. We were treated to lightning rounds of questions, which reminded me of the joy and humor of my history and elective classes as we debated Jewish pop culture heroes. (I will say that my students focused mainly on sports stars, which actors and musicians got the attention here.) There was also the quiz: “Too Jewish” or “Not Jewish Enough.” And in typical fashion, we often had one person with two answers to this question! 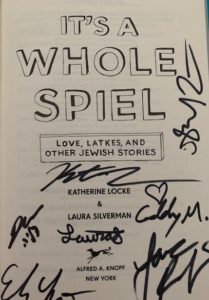 A final question addressed the place of the anthology in the Trump Era. While it was conceived in early 2017 before it was clear that Trump and his supporters would deliver on their hateful campaign rhetoric, the editors didn’t think of featuring contemporary stories about anti-Semitism. Laura did incorporate a mention of the Tree of Life synagogue massacre in her short story about a teenager who attends a gun protest, but the contributors agreed that, had the anthology been proposed and accepted a year later, the stories might have been very different.

The contributors, and my students, grew up at a time when Jews in the United States have enjoyed a level of acceptance that didn’t exist when I was growing up and threatens to disappear once again. I appreciate the way they’ve forged a sense of community (as the theme of my seventh grade class was Kehilla Kedosha, the Sacred Community) and created a work of joy, depth, and beauty. They aren’t literally my students, but I’m proud of them too!