Punch Up, Punch Down, Punch Sideways

When I returned to writing fiction in 2000 after a ten-year hiatus, I took classes at the New York State Writers Institute. In one of those classes, a fellow student who was getting his masters degree described the difficulties that writers of satire and other forms of humor faced. “Too many people don’t ‘get’ satire,” he said, and it can mean fewer connections and recommendations and a less successful career. 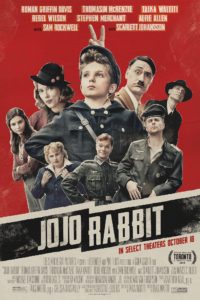 His words came back to me years later as I read reviews of the new movie Jojo Rabbit, from the Jewish-Maori filmmaker Taika Waititi. Despite the critical review in The New York Times, I decided to see Jojo Rabbit for myself, and it was as if we’d seen completely different films. For those who haven’t seen it (but should!), it follows a 10-year-old German boy Johannes “Jojo” Betzler in the final months of the Second World War. Jojo is an enthusiastic Hitler Youth member whose imaginary friend Adolf Hitler visits him when times are tough. And times are tough for the child, who lives in genteel poverty with his single mother after his soldier father has gone missing in action and whose odd behavior and lack of athletic ability has left him with only one friend, the equally awkward Yorki. When Jojo learns that his mother is hiding a Jewish teenager, a friend of Jojo’s late sister, he faces a crisis that the Times reviewer compared to that of the child in Roberto Begnini’s Life is Beautiful.

Yet the humor in Jojo Rabbit is meant to convey more, as we see when Waititi opens the film with a Nazi rally soundtracked with the Beatles’ “I Want to Hold Your Hand.” This postmodern “Nazi-mania” sets the tone and makes connections between various moments of the past and between past and present. The exuberant youngster — who gets his nickname at Hitler Youth camp because he refuses to kill a rabbit — is not a humanized Nazi but an innocent swept up in a bizarre and brutal death cult. The parallels with today’s racists and conspiracy mongers is clear. And like the Nazis, they have the power, at least for now.

Jojo Rabbit is an example of “punch up” humor, directed against those with power. Punch up humor has a long and illustrious history, for instance, in the Middle Ages when landless and legally restricted serfs poked fun at the nobility and royalty during Carnival. In my never-gonna-be-published YA novel, my working-class protagonist Ryder is obsessed with the medieval Carnival, and its modern day equivalent, Halloween, offers him the chance to go on a rampage in a McMansion neighborhood:

And then in Zack’s headlights I saw the mailbox itself — a perfect replica of the house, with wood-sided mini-turrets, cut-out windows, pebbles for the façade, and even little people on the doorstep.

“Yeah, but look at this.” I stuck the bat out the window and pointed toward the box.

I slipped out on predator’s feet, leaving the car door open. Zack cut the headlights. In the darkness the box was a fine sculpture and I, the ogre with the bat, poised to destroy it. The vegetable. Frankenstein’s monster with stitches still visible.

I choked off a scream.

The first swing of the bat took off the roof. The next one crushed the turret. The third sent the little people and the front door skittering into the street.

My fourth swing knocked the shattered box off its post.

But I wasn’t finished. With steel-toed boots, I curbstomped the second turret, then smashed the walls until they were splinters scattered on the pavement.

With one last swing, I snapped the post in half. I dove into the car partway onto Adam’s lap and yanked the door closed. Zack screeched forward, zero to forty-five in a second.

I raised my fist and shouted, “I am the king!”

Contrast this with “punch-down” humor, getting one’s laughs at the expense of those with less power. The video of Trump making fun of disabled reporter Serge Kovaleski during the 2016 campaign offended many for its punch-down nature, but it seemed to resonate with a growing number of people whose self-esteem depends on humiliating and hurting those who have even less status. Punch down humor is cheap and cruel, directed against people of color, LGBTQ and disabled persons, and those living in poverty or homeless. It reverses the spirit of the Carnival, as the “nobility” who win every single day win again by shaming the serfs. In a 1998 interview with Larry King, the great comedian George Carlin said:

Comedy has traditionally picked on people in power, people who abuse their power. Women and gays and immigrants, to my way of thinking, are underdogs.

In the United States, though, punch down humor has had a long history dating back to slavery, and it has served to divide a working class first by race and then by religion, gender, sexuality, immigration status, and ability in order to maintain the supremacy of the White aristocracy then and oligarchy today.

The situation becomes more complicated in “punch sideways” humor. Punching sideways can be the self-deprecating humor of Jewish comedians that kept the Catskills comedy circuit thriving for many generations. It’s inside jokes, meant to be consumed by members of a community and serves to strengthen the bonds of that community. But it can also serve negative purposes — airing dirty laundry for the enjoyment of outsiders or competition among marginalized groups that demeans one group and elevates another while leaving power structures intact. 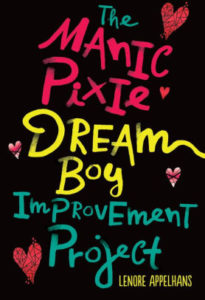 Humor is powerful and entertaining. Done well, it can cast light on our past and our lives today, as well as the things we take for granted but maybe shouldn’t. For instance, Lenore Appelhans’s The Manic Pixie Dream Boy Improvement Project is one of the few YA novels that can be classified as satire (as well as the equally rare metafiction). It pokes fun at a decade of sexist tropes in literature through a teenage boy, Riley, who is in therapy along with a passel of manic pixie dream girls because they wanted more depth in their lives. It’s punch up in that authors and publishers are the ones who call the shots; the residents of Trope Town live and work in this company town with no access to the outside world.

The people of the Middle Ages knew how to laugh in bleak times. As our times turn bleaker and more dangerous, we need to use humor to, in the words of the legendary turn-of-the-twentieth-century newspaper character Mr. Dooley, “comfort the afflicted and afflict the comfortable.” Not the other way around. Not to gain a slight advantage over others who are afflicted. And who knows? This may be how the revolution starts. 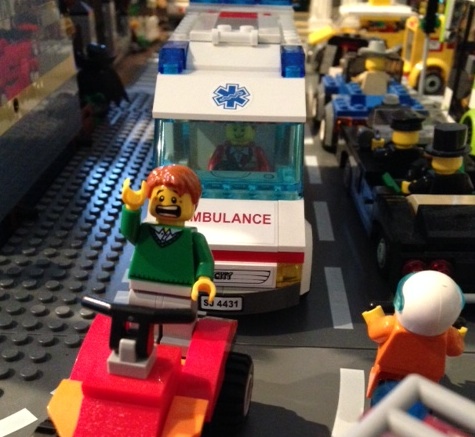 A scene from “J Is for Juvenile: The Chris Christie Scandals in LEGO,” one of my top posts of 2014.