My daily route to the dog park passes the entrance to the Intrepid Sea, Air, and Space Museum at the end of West 46th Street in New York City. The museum is a popular site for tourists from around the world, who explore the military history of the United States from a retired aircraft carrier built during the Second World War. 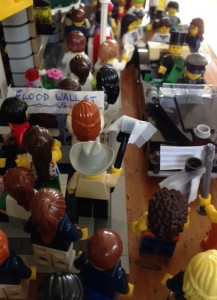 The people of Little Brick Township are talking part in the People’s Climate March to end our dependence on fossil fuels.

When I took the picture for my banner, storm clouds hovered over the Intrepid. Across the country, students from five high schools in a suburban district near Denver walked out to protest a right-wing school board’s effort to replace the standard Advanced Placement U.S. History curriculum with a substitute curriculum that discourages or downplays acts of protest or civil disobedience in this country’s past while emphasizing patriotism, obedience to authority, and the free market system.

The soldiers who served on the Intrepid may have been fighting for our country, but they were also fighting against totalitarian nations that imprisoned or murdered their opponents, tightly controlled the press and the educational system, and elevated patriotism to the point of invading other countries and enslaving or subjugating their citizens. Few people in Nazi Germany, Italy, or Japan questioned their government and lived to tell the tale. 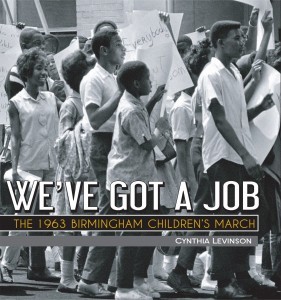 The proclamations of the Jefferson County School Board remind me of some other dismal lands that placed patriotism, obedience to authority, and the free market system above all else. I wrote two novels — one published, one forthcoming next year — about a family in Chile that ended up on the wrong side of the Pinochet dictatorship. Next month I will be speaking at a conference about my published novel, Gringolandia, focusing on how historical fiction can present history “from the ground up” — portraying the everyday lives of ordinary people facing violence, war, injustice, and oppression. Without the protests and civil disobedience of countless ordinary citizens, the brutal dictatorship that ruled Chile from 1973 to 1990 would still be in power today.

Young people played in important role in bringing the Pinochet dictatorship to an end, just like young people today in suburban Colorado have stood up for their right to learn about their history in which free speech and protest have played major roles. As 16-year-old Tina Aguilar my protagonist in Gringolandia’s forthcoming companion, Surviving Santiago, says:

People think a little kid doesn’t notice the difference, but I did. Even if I didn’t know who told the tanks and soldiers to be there, it was hard to miss them. A bunch of times I saw soldiers — like the one in front of me right now — beat people up on the street. Daniel would try to cover my eyes while Mamá would grab Papá’s arms and beg — think of your kids, amor — so he wouldn’t run to help the people. Daniel saw Papá get beaten and arrested in our apartment in Santiago while I was asleep. It’s not something my brother talks about, but before he left for college, his bedroom and mine shared a wall, and whenever he cranked up his music in the middle of the night, I knew he was thinking about it. 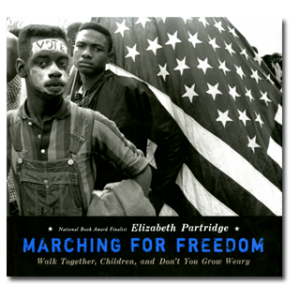 And where would the United States be without protests and civil disobedience? I grew up in the Deep South, where Jim Crow laws denied the talents and dreams of African Americans, restricted their right to vote and use public facilities, and ensured that people on both sides of the color line would never get to know the “other” beyond skin color and the station in life determined by it. Patriotism, obedience to authority, and the free market system were all used to justify both slavery and Jim Crow. Protest and civil disobedience ended these cruel systems.

In honor of the young people who bravely walked out of school to protest the propagandizing of their history, I would like to offer a few titles on the civil rights movement that highlight the contributions of children and teenagers: 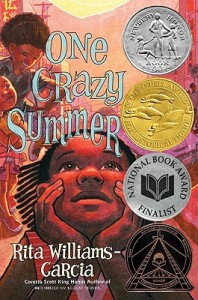 Levinson, Cynthia Y. We’ve Got a Job: The 1963 Birmingham Children’s March (Peachtree, 2012): Levinson focuses on four African-American children and teens who took part in the civil rights protests in Birmingham, Alabama, and who went to jail for their actions, including a nine-year-old activist and a college cheerleader who become a principal organizer.

Magoon, Kekla. Fire in the Streets (Simon & Schuster, 2012): The companion to Magoon’s award-winning debut novel The Rock and the River portrays Maxie, a 14-year-old activist who protests at the Democratic Convention in Chicago and dreams of being a full-fledged member of the Black Panthers.

Partridge, Elizabeth. Marching for Freedom: Walk Together, Children, and Don’t You Grow Weary (Penguin, 2009): Through text and photos, Partridge chronicles the weeks before, during, and after the 1965 march in Selma, Alabama, focusing on the young people who walked alongside Dr. Martin Luther King, Jr.

Williams-Garcia, Rita. One Crazy Summer (HarperCollins, 2010): Three sisters travel from Brooklyn, New York, to Oakland, California, to reunite with their estranged mother. They soon discover that she is working with the Black Panthers and they are attending a Black Panther summer camp, where they find their own way to contribute to the cause. 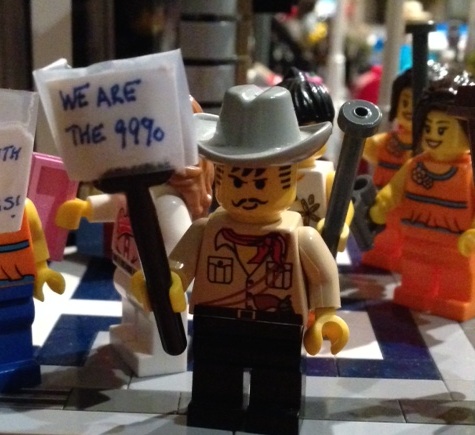 Cowboy Dave got fired for mentioning “union” at his big box store when his boss took the word out of context. He used to be a conservative, but now even he has discovered the importance of protest.