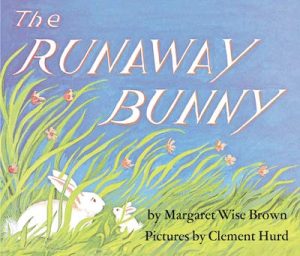 Though best known for her bedtime story Goodnight Moon, Margaret Wise Brown wrote many other popular children’s books, including the one that would become the guiding story of my family, The Runaway Bunny. In this picture book, also illustrated by Clement Hurd, a young bunny threatens to run off, and his mother says, “If you run away, I will run after you.” He threatens to turn into a fish to swim away, but Mom promises to become a fisherman and catch him. And so on. It’s a soothing story for young children of a parent’s unconditional love and devotion that also captures a child’s desire to break away and become their own person. One day those little birds will fly from the nest. 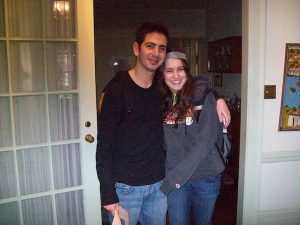 Derrick and Maddy at their grandmother’s house in Queens, 2007.

Much has been written about Helicopter Parents, hovering over their youngsters,  guiding their every move and trying to resolve every problem. Or Snowplow Parents, clearing the path so their children don’t encounter obstacles in the first place. As a college professor, Richard occasionally encountered both of these parental types and therefore stood aside as Derrick and Maddy went off to college and made their own choices. It was tempting to interfere, especially when Derrick proudly told us that he and some friends faced a slow weekend party-wise at Emory, so they went to the airport in Atlanta, asked about the cheapest last minute round trip ticket, and bought ones to Indianapolis for $40 each. One of them had a friend at Indiana University, so they showed up there for a big party. They had fun, but Richard and I wondered why Derrick didn’t spend what was probably his only non-party weekend on his campus catching up on classwork.

Flash forward four years. Derrick had graduated and took a staff job for a Democratic congressional campaign in 2010. But that was the Tea Party election and in early November found himself out of work. He called up one of his friends from that IU party weekend, and his connection landed him a job. I told Richard, “Had he chosen to study that weekend, he would have ended up in our basement.”

Rather, he ended up in New York City, and when Maddy graduated in 2014, she followed her friends to New York City as well. Their experiences, along with Maddy’s gap-year internship for a fashion designer in NYC, sealed Richard’s midlife crisis decision to sell our house in Albany and squeeze into a tiny NYC apartment full-time. Our apartment was around the corner from where Maddy lived at the time, and while we didn’t plan it that way, we’d gotten to know the neighborhood and liked it. 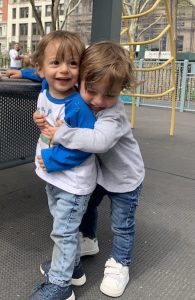 Jonah hugging Reed. Will they be Runaway Bunnies together?

We called ourselves the Runaway Bunny Parents, following our children wherever they go, both because we love them and because they introduce us to interesting places. And it’s convenient now to live seven blocks from the grandchildren, though both Richard and I considered it important not to intrude on their lives. For a variety of reasons, I’ve turned out to be a lot less available for grandmotherly duties than I’d expected, but I still feel a part of their lives as they grow up.

However, my Runaway Bunny Parent status has now reached its limits. Maddy has moved from New York City to Los Angeles, something she’s wanted to do for two decades, ever since she visited the city and fell in love. (I know how that goes!) She was very close to her father, but since he’s no longer with us, except in spirit (and I suspect approving), she wants to start a new life on her own. I’m going to miss her, and I’ll certainly visit, but we adults know how The Runaway Bunny ultimately ends. We don’t tell the children when we read the story to them at night, but leaving home is a universal experience for human and non-human animals alike.