Things are settling down here after a trip to Berlin last week and the U.S. election earlier this week. I thank all of the people who read my “Why I Vote” post and emailed me with their thoughts or posted on my Facebook page. When I read about people standing in line in the cold back home, waiting until 4 am as some people in Miami-Dade County did, or insisted on voting after breaking a leg in the parking lot, I realize how easy I had it, mailing my ballot from the post office two blocks away. And the fact that we can choose our leaders and representatives in free and fair elections makes us all winners no matter the outcome. Still, there’s more work to be done to make the system even fairer and more accessible.

Richard and I flew to Berlin on October 30, the week before Election Day, and with our thoughts on family and friends back home who suffered through Hurricane Sandy. Our son, Derrick, was without power in his Lower Manhattan apartment for four days; fortunately, Richard’s mother and aunt in Queens had no outages and no damage. 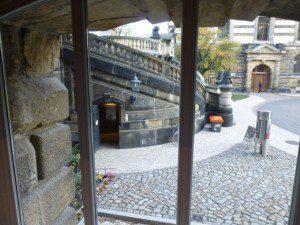 The day after we arrived, we took the train to Dresden, a city heavily bombed by the Allies during the Second World War, that served as the setting for Kurt Vonnegut’s classic anti-war novel Slaughterhouse Five. Some of the older part of the city has been rebuilt from the remains and rubble of the bombing, and the scorch marks are still evident.

We ate at a restaurant located in a building that had been reconstructed from the rubble. After the end of the war, there were no building materials, so women picked up and sorted the stones and bricks from the shattered buildings, and new buildings were patched together from them. Notice the broken stones and the bricks stuck in between. A little extra mortar here and there, and the buildings stand as a monument to the destruction of war and the resilience of human beings. 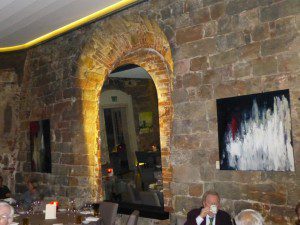 We spent the next day at the Military History Museum in Dresden, which chronicles Germany’s involvement in wars from the Crusades through the Cold War. Having some familiarity with German history, one of the things that struck me most was the reaction to the country’s victory in the Franco-Prussian War. For two generations, all things military dominated the culture–clothing, jewelry, music, literature, etc., but as time went on, fewer and fewer people had experienced the horrors of war. As a result, they happily embraced the promise of a European conflict in 1914 as a grand adventure, a unifying experience, and an opportunity to achieve international dominance. Reality set in one year later, with the return of the wounded and the dead, and starvation on the home front.

We then returned to Berlin, and on our last full day there — Saturday — we saw two more historical exhibits. The first was the Berlin Wall Museum, which holds a special place in my heart because the last time we visited the city, in summer 2008, the museum was under construction and people were invited to see the proposed exhibits and comment on them. I filled out a page of my thoughts and suggestions and was interested to see which ones had become incorporated into the current exhibit. I like that most of the exhibit is outside so people can see where the houses once stood that were first bricked up and then torn down to build the wall, where the various walls were built (besides the famous outer wall, there was an inner wall, a signal fence, rows of lights, and a ditch to prevent vehicles from driving through), and how people attempted to escape. In the nearby Nordbahnhof S-bahn station, there’s also an exhibit on the “ghost stations” created when East German authorities closed off subway stations on West German lines. There was a picture of the Potsdamer Platz ghost station, under guard so no one would try to board a train to the West.

Later on, the guards themselves were locked into rooms rather than assigned to roam the tracks because so many of them tried to escape.

After the Berlin Wall Museum, we headed to Potsdamer Platz and to a newly constructed museum called “Topography of Terror.” The museum is on the site of the old SS headquarters, and the exhibit chronicles the evolution of Hitler’s secret police and how they imposed their will on the German population and, later, on the people of countries occupied during the Third Reich. I was particularly struck by how a paramilitary police force came to supplant and then take over the professional police and criminal investigators of the Weimar Republic. In the end, the criminals became the police.