Categories Menu
Home » Blog » So You Want to Take the Next Step: Buying a Home in Portugal

So You Want to Take the Next Step: Buying a Home in Portugal

For the past five years, I’ve offered advice to people traveling to Portugal and looking for places to go, to shop, and to dine, as well as background information on the country’s rich history and culture. But what if you have fallen in love with Portugal and want to make it a part-time or full-time home? Or you’ve noticed the safety and freedom that people enjoy — a hard-won safety and freedom, I should add — and you lack these in your home country? Or you worry that because of Brexit you will no longer be able to work legally in the EU without a residency visa in one of the remaining EU countries? 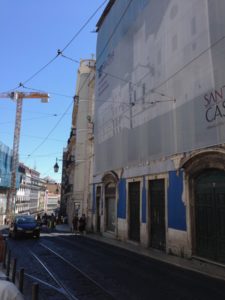 A building in the Chiado neighborhood, under rehabilitation in 2015.

Fear not, dear traveler, because I have devoted much of my trip this year to researching these questions. Last fall, I featured a couple who appeared on House Hunters International, looking for an apartment in Porto and residency visas so they could use Portugal as their home base for one of the spouses who consulted for banks around the world. Jeff Rosenberg (the one who doesn’t work in finance) added a comment clarifying some of the information in my piece. It turns out that one only needs to buy a property worth 500,000 euros, not 600,000, to qualify for a “golden visa” with legal residency and a second passport. (The amount for an older property needing rehabilitation is still 350,000 euros.) Jeff also said that the paperwork to receive the visas for both him and Glenn took about a year. 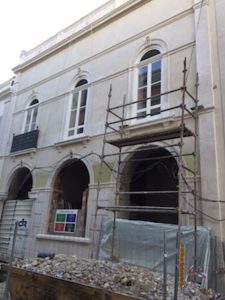 I met with real estate agent Filipe Froes from ReMax Valor Group in the Principe Real neighborhood — my own favorite neighborhood in Lisbon — to find out more. Yes, the amount for the “golden visa” is still 500,000 euros. And that amount is per household, so an extended family can pool its resources and obtain multiple visas. Besides the rehabilitation option, there are other ways of obtaining residency visas in Portugal — for instance, investing in a business that employs Portuguese citizens or investing in cultural institutions. Young people can apply to and enroll in a Portuguese university for a student visa, and someone with a marketable skill — ranging from teaching English to helping to start an organic farm — can obtain a work visa. In fact, the golden visa is set up for retirees and people whose income comes from sources outside of Portugal; a golden visa recipient cannot take a job with a company or organization in Portugal. For people fleeing conflict zones, Portugal does take in refugees. On a TV news program I saw that the Foreign Minister is traveling to Venezuela in early June to assess a deteriorating political and economic situation that is rapidly devolving into civil war and to arrange asylum for those in need. 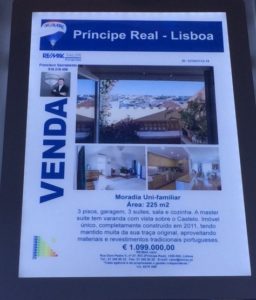 The ReMax Valor group’s ad for a whole house, in Portuguese, a moradia.

Froes recommended that potential buyers of property work with an immigration lawyer. His agency does not have one on call, but he did offer to recommend lawyers that other clients have used. The agency does have connections with a bank, because property buyers can take out a mortgage for up to 60% of the purchase price of the apartment, pending a thorough credit check and sufficient collateral. Froes said that buyers must obtain a fiscal number, known as NIF, and set up an account with a bank in Portugal whether or not they take out a mortgage (and most foreign buyers pay cash, he said). For buyers from the United States, that can be a bit more complicated because of FATCA (Foreign Account Tax Compliance Act), a U.S. law that requires foreign banks to report U.S. citizens’ and legal residents’ assets to the Treasury Department to prevent tax evasion. Some banks in Europe will not accept accounts from U.S. citizens as a result. In checking with an organization of expats living in Portugal, I found that Activo Bank does take care of FATCA reporting and receives high ratings. Other Portuguese banks comply with FATCA as well. 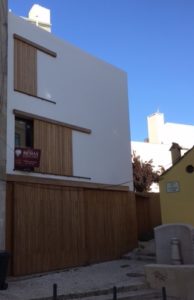 The actual moradia is a three bedroom beauty that’s way out of my price range.

Mortgage rates are relatively low in Portugal because there’s less gap between the prime rate (what governments and central banks charge commercial banks) and the rate commercial banks charge to borrowers. When I spoke with Froes, the mortgage rate was 2%, but the government just announced it would be raised to 2.5%. While this makes the mortgage a bit more costly, it’s more evidence of Portugal’s economic recovery since the 2008 crisis.

For most buyers, the process of obtaining a NIF, setting up the bank account, and buying the property with cash was quick and easy. In fact, a client of Froes’s from Turkey bought and paid for an apartment within a week. He has a lot of experience working with foreign clients and said that the numbers have increased a lot in the past five years. At first, many of his clients in the Principe Real area came from France (and I can attest to that because when we lived in that neighborhood in 2012, it was known as the “French neighborhood”). Nowadays, the buyers are more diverse but in the past year there has been a huge influx of people seeking property and residency visas from Turkey, Brazil, and the U.K. due to political repression, high crime and political chaos, and Brexit, respectively. For my part, I noticed the significant presence of Brazilians in the neighborhood, to the extent that they and other newcomers have displaced the French. He has not seen many buyers from the United States — yet.

That may change, and quickly. Everyone in Lisbon has been talking about the arrival of Madonna, who appears to have enrolled her children in a French international school and is looking for a place in a quiet neighborhood on the outskirts of Lisbon that I will not name because she has a right to her and her family’s privacy. Just outside the city limits, in the suburbs of Algés, Oeiras, and Cascais, more expats are arriving to enjoy the experience of living in Portugal. The same process is going on in Porto, and a few hardy immigrants with more construction skills than money are buying property in once-dying rural areas and bringing them back to life.

In the next blog post, I will talk about some of the choices available to people looking to buy a house or apartment in Lisbon and the results of our own “house hunters international.” And if you have any questions, please leave them in the comments, and I will try to answer them or consult with someone in the know.