When I added the new shelf and storage bins to the table set-up for Little Brick Township, it freed up space for the town’s expansion, and I immediately set about planning a MOC Townhouse to fit on a half-size 16 x 32 stud baseplate. I started with a Creator set released earlier this year, the Park Street Town House (31065) for its bricks and bay windows and the design of the stoop. My plan is to raise each floor above the basement by one brick to allow these floors to be lifted off, as in the other Modulars, and to make the house deeper rather than wider, with the swing set in the back rather than on the side. I would also move the fire escape to the back, so that this new modular MOC could connect with its neighbors on each side. 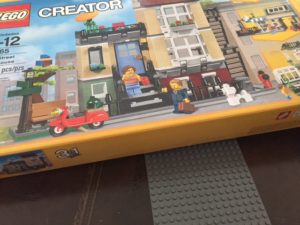 Awaiting pieces to begin my next build.

I quickly ran into problems that stalled my building efforts. After building so many MOCs, I had run out of the 1 x 2 Technic bricks with holes in the middle that allow me to connect my Modulars to their neighbors. I found a vendor on Amazon with 20 of these bricks in gray, but I don’t expect the shipment to arrive for another week. After I placed that order, I discovered that I only had one 1 x 8 light gray tile, and I need two for the edge of my baseplate so it’s consistent with all my other Modular baseplates. I know other members of NYCLUG with the piece who would be willing to part with it — or trade with me — but I have to wait until our next meeting, sometime in August, to make the exchange. More waiting.

As a builder of MOCs, I’ve become familiar with what I call the Rumsfeld Principle, named after the infamous Secretary of Defense under the administration of George W. Bush. When asked why U.S. military forces had gone into battle with insufficient armor (not to mention insufficient understanding of the desire of people, no matter how misruled, to defend their land against foreign occupation), he responded, “…you go to war with the army you have, not the army you might want or wish to have.” When applied to the constructive, nonviolent, and humane pursuit of ever-more-impressive Lego towns, the principle calls for the creative adaptation of designs and plans in the absence of specialized and often hard-to-find pieces. In other words, you build with the pieces you have, not the ones you wish to have. And if you need a specific piece that cannot be substituted, you have to be willing to wait. 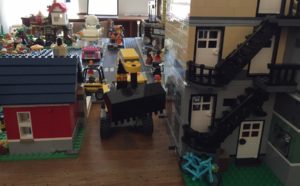 Preparing the site for the new MOC Townhouse.

Patience and resourcefulness are good qualities to have for both Lego building and writing. People often ask me if my building contributes to my writing. The influence is not direct. Often, taking time off to build appears to be a distraction, as I’m not sitting at my desk putting words on paper or screen. But as I fit the pieces together, I’m thinking about my stories, how to fit the puzzle pieces of characters and plot strands together so they build on each other and reach a gripping climax and satisfying ending. Just as a building rests on its solid foundation, a story needs a strong hook to draw readers in and make them care about the characters. And just as the strength of walls depends on interlocking bricks that support each other, the strength of the story depends on unique and complex characters, each with their own desires, in relationships with the others. Just as it’s easier to stack bricks rather than interlock them, it’s easier to rely on tropes and cliches in building a story. But neither the building nor the story will stand up in the long term.

I like to create buildings so strong that they can be moved from one home to another, taken to shows, and shipped around the world for display in galleries. Similarly, I want to write stories that stand the test of time. While I have yet to write a book specifically around Lego — I do have something in mind, but way at the back of my mind — Lego building makes its way in my stories in unusual and surprising ways.