A lot of my colleagues have been writing end-of-year roundups that they’ve sent to their agents or posted on their blog. Today my VCFA classmate and friend Laurie Morrison, who has two middle grade novels coming out next year, posted hers, and I really like what she wrote because she’s going into her debut year with a sense of what she values most with her writing. After the new year, she will be contributing a guest post on persistence, and I hope it will inspire those among you who are writers to keep going despite all the challenges of finding an agent and publisher. 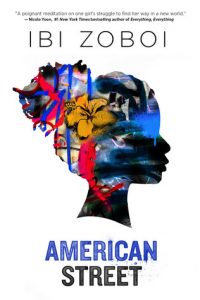 In previous years I’ve made New Year’s Resolutions, and getting a job has been a consistent goal for me. In 2017, I actually did it! In January I began teaching a semester-long workshop once a week in a ninth grade English class at Academy for Conservation and the Environment in the Canarsie neighborhood of Brooklyn. I enjoyed getting to know the students and watching their writing develop over the 16-week course. I also started a classroom library with books that reflected their cultures and lives. By far, their favorite book was Ibi Zoboi’s American Street, the story of an immigrant teenager from Haiti adjusting to her aunt and cousins’ chaotic home in Detroit while her mother remains in detention for not having the proper documents at the border. Other books with waiting lists in the classroom library included Angie Thomas’s bestseller The Hate U Give, Lilliam Rivera’s The Education of Margot Sanchez, set in the Bronx, and Matt de la Peña’s disaster thriller The Living. At the end of the semester, the students saw their work published in a book.

I was hoping to continue the class with a new batch of ninth graders, as well as advise a creative writing club after school in the fall, but both the coordinator of the program at the school and the contractor who hired me and furnished the curriculum took new jobs out of the city. However, I was still able to use my teaching skills at a very well-received workshop for Behind the Book, in collaboration with the VCFA Young Writers Network. The students there were also reading American Street, and I offered guidance to them and their volunteer writing coaches on developing stories from the prompt.

This year I also tried something completely new — writing novels for hire. Over the summer a book packager contacted me with an assignment. They thought of me because of one of my blog posts, my account of traveling through Austria in June in search of my grandmother’s Dobash Cake. Two months later I had a finished chapter book, The Cooking Gene, which will come out next year from Benchmark Educational Publishing, and shortly afterward started on another, a historical novel based on a true story from the sinking of the Lusitania. I also had a novel for hire — a middle grade contemporary about a Lego-obsessed autistic boy — fall through for inexplicable reasons, but my agent was able to get my work and my rights reverted so that one day I may return to it. At this point, I only have three chapters and an outline, but it may be something for a later date, or for a co-author. 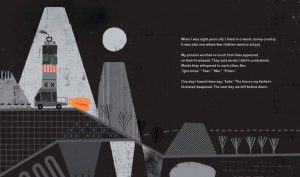 The opening page of Three Balls of Wool (Can Change the World) shows the family fleeing the dictatorship in Portugal.

I had two translations come out this year. The Queen of the Frogs, a fable by Davide Cali and illustrated by Marco Somà, was published by Eerdmans Books for Young Readers in the spring. In June, Anita Eerdmans and I spoke on a panel about translation at the American Library Association conference along with translator and librarian Rachel Hildebrandt, founder of the Global Literature in Libraries Initiative, and Dr. Annette Goldsmith, the author of a reference book on international children’s literature in translation. In October, Enchanted Lion published Three Balls of Wool (Can Change the World), by Henriqueta Cristina, illustrated by Yara Kono, a timely picture book about a refugee family from the dictatorship in Portugal in the 1960s that brings about change in their new home. Next year I’ll have a new translation out from a new publisher. Charlesbridge is publishing my translation of Olive the Sheep Can’t Sleep, a bedtime book by Portuguese author and psychologist Clementina Almeida, illustrated by Ana Camila Silva.

While 2017 was a busy year for my work, I still have a number of projects on submission or in progress. My YA historical novel set in Portugal during the same dictatorship that drove out the family in Three Balls of Wool is under consideration at a number of major houses. In early fall, I received a very encouraging R&R (revise and resend) letter from one. I felt the editors really “got” the book and their suggestions made it even stronger. The revision went back to them (and to all the other editors that have it) in October, and my fingers are crossed for some good news. This would be my first YA novel sale in four years, since Running Press bought Surviving Santiago. I lost a lot of time writing a contemporary YA that had a fatal flaw, submitting it, and then revising it endlessly before I realized I was in a rut and needed to move on.

Lesson learned, this time I started a new historical novel while the other one went on submission. I wrote my first chapter in Portugal in late May (though it’s not set in Portugal), and I now have almost 200 pages written, about 2/3 of the book. This is the most complex YA novel I’ve written, with a collective protagonist — something I’ve wanted to write since my third semester at VCFA when Sarah Ellis introduced me to books with omniscient third person narration and collective protagonists. With the collective protagonist, every act affects not only their fate but that of the other protagonists. And I have four whose chapters alternate according to who is the principal actor at that time. This new work-in-progress represents my first autistic #ownvoices protagonist since Rogue. (I don’t count the MG write-for-hire attempt, because I only wrote 10 pages.) I wasn’t sure I wanted to tackle such an autobiographical protagonist again, because it was difficult for me to face the person I was to create Kiara and it was difficult to face the fact that a lot of important people didn’t like Kiara or the novel. However, I now feel more prepared, aware that publishing isn’t the Special Olympics and I won’t get a pat on the head for my honesty and authenticity. In fact, it may be the opposite, that people simply won’t “get” me the way they don’t “get” a lot of #ownvoices authors when outsiders dominate the industry.

But things have changed since 2013, and other books by #ownvoices authors — notably the speculative YA novel On the Edge of Gone and the MG contemporary The Someday Birds — have enjoyed critical and commercial success. Having served as a pioneer, I’m now giving myself a second chance. I hope other people give me, and my new protagonist, a second chance, too.

I’ve also started to think about a new book, once this one is finished. The new one is also YA historical, and it shares its central theme with the other two. One of the things I’m thinking about is packaging the three books as a series, Resistance Stories, because all three books feature teens who, faced with losing freedom and living under tyranny, choose to resist in different ways. Given everything that’s happened in the past year, these historical novels aren’t only stories about ordinary people and events in the past (and I think it’s important to present the stories of ordinary people, not rulers and Chosen Ones); they can also provide guidance as we face our losses and challenges now and in the future.

I hope all of you have a happy, healthy, and productive 2018!