Categories Menu
Home » Blog » The Academy Award That Made Me Happiest: Free Solo

The Academy Award That Made Me Happiest: Free Solo

Some years ago, my husband attended a conference in San Francisco, and the two of us went out a few days early to visit Yosemite National Park. Hiking past some teenage rock climbers, I asked them how the bolts they were using got into the wall. (You can guess by now that I haven’t so much as entered an indoor climbing gym.) One of them answered, “A better climber goes up first and puts them there.” 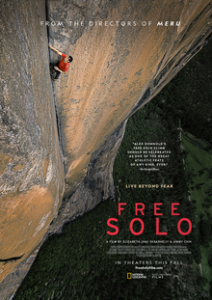 I wondered who those better climbers were, and the risks they took to get to the top of the rock. So when the documentary Free Solo came out last year, my husband and I rushed to see it.

Directed by the creative team of Elizabeth Chai Vasarhelyi and Jimmy Chin (directors of the critically acclaimed Meru), Free Solo portrays Alex Honnold, one of a rare breed of rock climbers who do so alone and without ropes or other safety equipment. He climbs in t-shirt and shorts, and much faster than climbers in teams with equipment. His goal, as portrayed in the film, was to be the first free solo climber to scale El Capitán, a peak in Yosemite National Park that has claimed the lives of more than 30 people since 1905.

Although RGB, the documentary of the life of Supreme Court Justice Ruth Bader Ginsberg, was a sentimental favorite to win the Academy Award in the Documentary category this year, I wanted to see Free Solo win for two reasons. The first was the technical challenges that the filmmakers faced. They had to convey Honnold’s experience of climbing the peak and making it accessible to viewers who had little or no experience with the sport. They also had to film the climb in a way that presented no danger to either Honnold or themselves. In other words, they had to stay out of his way during this perilous climb. And they had to take into account weather and other conditions that exposed the film crew shooting from nearby peaks or in the air.

The second achievement of this film was its creation of a story arc featuring Honnold. We know right away his desire and why. One by one, the filmmakers present the obstacles facing him, from injuries to weather. Several times, he turns back. In keeping with the story line of the hero’s journey, the documentary shows allies, particularly Honnold’s mentor Tommy Caldwell, who advises him and comments on his quest. The drama of the day itself, which begins before dawn in the van where Honnold lives, mounts with the sunrise, the places where he bailed earlier, and the seemingly impossible points farther up where he appears to squeeze into crevasses or hang in the air. The audience applauded when Honnold reached the top, a testament to the quality of the film’s storytelling.

Leaving aside its technical and storytelling skill, this film resonated with me. Even though I could never match his physical feats (I have issues with balance and proprioception, which is the awareness of my body in space, and would thus be a poor risk as a rock climber) I identified with Honnold’s single-minded pursuit of his goal. The risk he takes, the fact that failure could prove fatal, puts my own failures into perspective — though I understood his disappointment and impatience when injuries put him out of commission for months at a time. More so, I identified with his choice to climb alone and without gear, traveling light and quickly up the mountain. Honnold has said that he chose free solo climbing because he didn’t want to ask other climbers to go with him, with ropes and the rest of the gear; he preferred to go it alone. I also struggle with asking others for help, with working with others and adapting to their priorities and schedules.

Last week I discussed Free Solo with a friend, who said the film resonates widely because its portrayal of the lone hero ties into the ideology of rugged American individualism. My connection, though, is more on a personal level than an ideological one. If I could, I would climb a mountain alone, preferring to face its challenges by myself, wrapped in the solitude of my own thoughts and vision.

For those of you who have cable (which I still don’t), Free Solo premieres tonight on the National Geographic Channel. See it now, see it later, but see it!