Categories Menu
Home » Blog » The Babies Discover Each Other

The Babies Discover Each Other 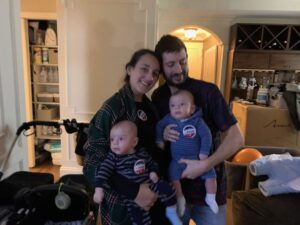 Next week Jonah and Reed will reach the four month mark. Much has happened in the past few weeks. Although they were too young to vote in the election earlier this month, they sported “I voted!” stickers along with their parents, watched the returns on TV, and celebrated when their parents’ candidate was declared the winner four days after the election. 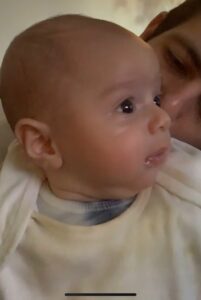 Reed watches the returns on TV.

The twins have achieved personal milestones as well. They can sit propped up with pillows. They make cute little sounds, coos and goos and gahs, so they don’t only have to cry to be heard. And they’re “speaking” to each other. We’ve already speculated on whether or not they recognize each other (probably not) but they’re now feeling each other out in the beginning stages of what will likely be a close relationship between the two little people who are genetically more similar to each other than to anyone else in the world. Did you know that when they have children, their children will be half-siblings genetically? And if they marry another set of identical twins, their children will be full siblings? And by the way, the town of Twinsburg, Ohio holds a Twins Day Festival every August, and several sets of identical twins have found life partners there. Derrick and Lindsey have already talked about a trip there, and I hope to join them as soon as we can travel and attend events in person. 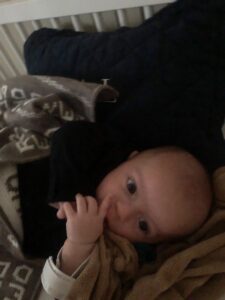 Today Derrick sent us an excited message that Reed found his thumb and is excitedly sucking it — just like he did when he was a baby. In the first few months, babies figure out who they are, where they end and the rest of the world begins. Both boys play with their hands a lot, rub them together, and wave them in front of their eyes. Before he connected his thumb with his mouth, Reed sucked his pacifier far more than Jonah. Even though they’re genetically similar, the boys are developing their unique personalities. I’ve written about how Reed seems to watch and observe more than Jonah, while Jonah is usually the first and loudest to cry when he wants something. Now Reed looks more at Jonah than Jonah looks back, and he’s the one to initiate their “conversation.” We’ll see how the relationship develops between them, if one of them is the dominant or more outgoing one, and if their personalities complement each other. We’re helping out this weekend, so we look forward to seeing Jonah and Reed grow and change, and taking more pictures to document their journey. 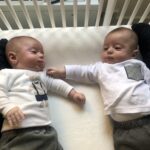 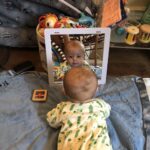 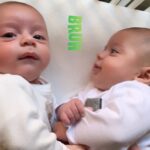