Change requires information, and the effort to publish and promote diverse books for young readers and their authors is no exception. Several months ago, Jason Low from Lee & Low Publishers initiated a Diversity Baseline Study (DBS) to find out where we stand now in terms of diverse representation among the editorial, production, and marketing staff of publishers large and small, as well as the people who review books for children. The DBS grew out of concerns that authors and illustrators of color as well as LGBTQIA and disabled authors and illustrators will not thrive unless those with whom they work in publishing share their experiences and concerns.

From my experience and the experience of writers and illustrators I know, this makes sense. Cultural outsiders often have a frame of reference built on popular media — and popular stereotypes. This, for instance, leads to an oversupply of books about African-Americans that deal with slavery or the Civil Rights movement. Or books about Latinos who are either migrant workers or gang members. Or in my case, the refusal to accept Kiara in Rogue as an autistic protagonist because she “isn’t like” the protagonist of an award-winning book that came out several years earlier.

Having diverse publishing staff also means seeking out book creators in places others wouldn’t think to look. A recent New York Times Magazine article about Ta-Nehisi Coates’s editor Chris Jackson mentions that Jackson has found many of his African-American and Latino authors not through the traditional route of agents and MFA programs but attending readings at the Nuyorican Poets Cafe and other venues known for their diverse presenters and audiences. According to the article, Jackson

The DBS acknowledges that in children’s and young adult literature we need more editors like Chris Jackson. And right now, the picture isn’t pretty. For instance, at the editorial level, 82 percent of staffers identify as White/Caucasian, two percent Black/African-American, one percent Native American/Alaska Native, seven percent Asian/Native Hawaiian/Pacific Islander, four percent Hispanic/Latino/Mexican, one percent Middle Eastern, and three percent Multiracial. Given the fact that both small and large publishers participated in the survey, those diverse editors may concentrate in smaller publishers such as Lee & Low and Arte Público/Piñata Books. Moving on to gender, 84 percent of editors are cis-women; only one percent identified as gender nonconforming. Eighty-six percent of editors identify as straight/heterosexual, with six percent lesbian/gay and eight percent bisexual/pansexual. Only eight percent of editors reported having a disability. Book reviewers were even more likely to identify as White/Caucasian, cis-woman, and straight/heterosexual. Twelve percent reported a disability. For more findings in other areas of publishing, check out the survey here.

Jason Low’s follow-up post identified concrete measures being taken to diversify publishing, from paid internships to stepped up recruiting to in-house training programs to improve the climate for and retention of diverse staff. I hope that next year’s survey and ones after that report progress in all these areas. 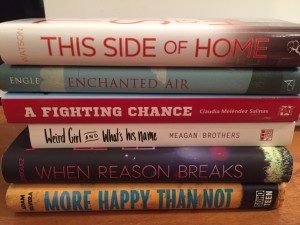 A selection of great diverse books from 2015, produced by both large and small publishers.

As an author with a documented disability, I certainly would feel more comfortable working with publishing professionals who have faced similar situations to mine. Even though my current projects don’t feature protagonists on the autism spectrum, I have infused the stories with my experiences and perspectives. For instance, two picture books I’m working on feature characters who have a love/hate relationship with “the rules.” Like me, the main characters transgress, perhaps without even knowing or understanding the rules, and suffer the consequences. But transgression of poorly-understood rules also leads to transformation, to a unique perspective on things most folks don’t notice or else take for granted.

One of the things that diverse people in publishing are more likely to understand is that diverse writers and illustrators are not “all about” their race, ethnicity, gender, sexual orientation, or disability. The creative process takes unexpected turns. And they are less likely to latch onto a canonized “single story.”

The information is out there. Now it’s our turn to make the change.