In my seventh grade Sunday school class, we explore the concept of Kehillah Kedoshah, a Sacred Community. Over the years, we’ve phased out the first-day review of class rules in favor of a holistic curriculum that emphasizes, above all, our belonging to a community guided by Jewish values and commandments. The principles of our Kehillah Kedoshah inform our study of Jewish history as well as current events and issues. The history curriculum is project-based and students work in small groups to make choices in a variety of simulations, from choosing whether to convert or flee during the Spanish Inquisition to setting a budget, designing a building, choosing a rabbi, and making a variety of ritual and social action decisions for a synagogue established in an American colony in the 1770s.

Because I enjoy teaching this class so much, I’ve commuted to Albany for the weekend even though I’m now living in New York City. Each week we begin our class with Morning Meeting, when we talk about something important that happened to us that week. At last week’s Morning Meeting, I talked about the devastating explosion and fire in my neighborhood on Thursday, March 26, which killed two young men, injured more than 20 other people, and destroyed three buildings. 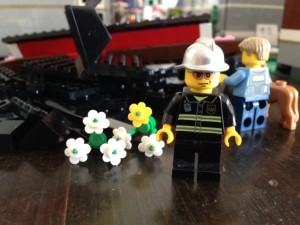 In a populated area, your decisions affect the entire community.

By Sunday morning, it had become pretty clear that the explosion was caused by a gas leak, and that the owner of two of the destroyed buildings had illegally tampered with the line of the other building in order to provide gas to her tenants. Some shoddy plumbing work was also involved, as she’d tried to install a larger, permitted line, but it wasn’t completed to proper specifications, and the utility refused to open the new line.

In a crowded, bustling neighborhood, a horrific tragedy resulted from these thoughtless decisions. I mentioned to my students that New York City is the kind of place where people have to trust that their neighbor or their landlord (or anyone else with whom they come into contact) won’t do something wrong or stupid that could have life-threatening or life-changing consequences. On the other hand, the proximity of other people amplifies any gesture of selflessness or generosity. The death toll would have been much higher had an off-duty firefighter not climbed through smoke and flame up a fire escape to tell upstairs tenants to evacuate the building. When a woman got stuck on a fire escape, another passer-by risked his life to help her down safely.

Our seventh grade community is a safe place when everyone lives up to the values of a Sacred Community — and for the most part, they do a good job of it. I know a lot of people consider this a tough age, but the kids really do respond to consistency and high expectations, and year after year, I’ve been very proud of what they’ve accomplished. Last week’s tragedy provided us with a real-world illustration of what happens when people don’t think of the larger community — as well as when they do. 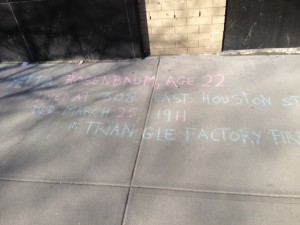 The East Village explosion and fire happened one day after another incident in which an individual’s self-interest led to a terrible tragedy. On March 25, 1911, the Triangle Shirtwaist Factory caught fire and 146 workers, most of them young women, lost their lives. Contributing to the death toll was the factory owners’ practice of locking the doors from the outside so the workers couldn’t leave early. This was the worst industrial accident in New York City, and after years of mostly unsuccessful labor activism, various reforms in working conditions were finally enacted. In my “Waging Peace” column for the online Albany Times-Union, I talk about a memorial to the victims from my neighborhood and review two books for young readers that feature teenage activists, Melanie Crowder’s historical novel-in-verse Audacity, and Claudia Guadalupe Martinez’s contemporary novel Pig Park.