Categories Menu
Home » Blog » The Wildfires in Portugal: How You Can Help

The Wildfires in Portugal: How You Can Help

In my last full weekend back in the United States I attended an alumni reunion at Vermont College of Fine Arts and was so busy that I didn’t find out about the tragedy in Portugal until I returned to New York City on Sunday. By then, 64 people had lost their lives and dozens more were injured in the worst wildfire in the country’s history. Thirty of those who perished in the Pedrógão Grande fire — which burned a heavily wooded area in the center of the country less than a hundred kilometers from Coimbra — were in their cars on the two-lane EN-236 highway, which was consumed by the flames.

Portugal is no stranger to wildfires. Every summer brings danger, with searing heat, especially in the interior of the country, and weeks without rain. The young adult novel I sought to translate from Portuguese, Carla Maia de Almeida’s Irmão Lobo has a deadly wildfire at its climactic moment. Wildfires are a real danger for people driving in wooded rural areas after long periods of summer drought, and locals often look out for tourists in rental cars who don’t know the area or the warning signs. If you want to rent a car and travel to the countryside, don’t be deterred, but remain alert to local conditions and advisories. 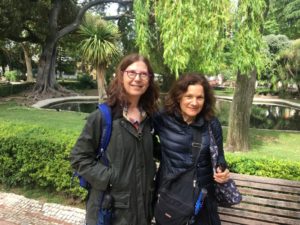 With fellow writer, translator, and PEN member Orel Protopopescu at the Largo da Estrela in early May, before the heat wave.

Unusual this year was the early onset of heat and drought; normally August is the riskiest month. I noticed the changed weather when I was there, as late May and June brought record temperatures to a wide swath of Europe. With climate change caused by greenhouse gases, these anomalies are likely to continue, with worsening heat waves, more intense storms, and long periods of drought. Other factors that led to the fire are ones Portugal has only started to address — specifically the overplanting of highly flammable (because of the oil) eucalyptus trees, and neglect of forested areas, 80% of which remain in private hands. While the government passed a law in March 2017 to cap the number of eucalyptus trees and to streamline the identification of landowners and enforcement of forest maintenance standards, the law was too recent to have had much effect.

In the days during and after the fire, thousands of Portuguese stepped up to offer food and shelter to those evacuated from their villages or burned out of their homes. Inside the country, banks, supermarkets and other businesses are collecting donations. World-famous athletes and musicians (including recent Eurovision winner Salvador Sobral) are organizing and appearing at fundraisers. The needs, however, are long-term, as many of the evacuees — as well as those who sheltered in place — lost their homes and farms. Even when the family and the family home survived, livestock and crops could not be saved. In addition to fundraising efforts within Portugal, many Portuguese in the diaspora have organized crowdfunding campaigns online to raise money. For example, Amanda DaCosta, a young Portuguese-American athlete, has put together a GoFundMe campaign for supporters in the United States. In the UK, Antonio Honorio has raised almost 10,000 pounds, his goal for his fundraising effort. The state-owned bank of Portugal, Caixa Geral de Depósitos, has established the fund “Unidos por Pedrógão Grande” (“United for Pedrogao Grande”) to help the fire victims over the long term. Information about the fund (albeit in Portuguese*) and a link to the account, may be found here.

*translation: Caixa Geral de Depósitos expresses its sympathies for this difficult moment that has come to pass for the victims of the fire that burned yesterday in Pedrógão Grande and that spread to Figueiró dos Vinhos and Castanheira da Pêra. For all the citizens who wish, like us, to show solidarity and civic spirit, we have set up an account that was created for this purpose, into which the Caixa has already deposited its contribution of 50,000 euros.

To our customers affected by this tragic event, the Caixa will propose solutions to help mitigate and overcome the effects of this disaster.

Update October 18, 2017: Another round of wildfires has devastated forests and towns — some of them quite large — in central and northern Portugal as well as Galicia, and taken the lives of 41 people in Portugal and 4 in Spain. I’m arranging for a guest post with information about the relief and recovery efforts and how readers can help. Stay tuned!