I became a fan of Robin Kirk’s science fiction trilogy with the first volume that gave it its name, The Bond. I eagerly awaited the second installment, The Hive, which continues the story from the perspective of a different main character, though I eagerly awaited the reappearance of Dinitra from the first book. What would happen to her and love interest Fir, along with the collection of misfits they had gathered to fight against cruel and manipulative rulers? I had to wait a while for The Mother’s Wheel but am grateful to Robin for her work in keeping the series going. Many series authors experience the cancellation of the final volumes, leaving readers hanging. Robin’s guest post describes her efforts to rebrand the first two volumes with a unified cover design and continue her characters’ intertwined stories until the end. In this way, she serves as a guide for any author facing the same situation. 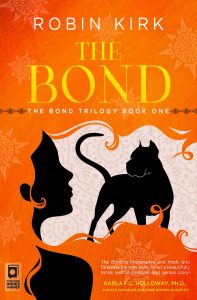 “The Bond Trilogy” envisions a world where women rule, men fight to survive, and mutants must choose sides to win their own freedom. In The Bond, girls like Dinitra are engineered by Sowers, who plan to eliminate men once they can brew new generations in their laboratories. But resistance to this planned genocide grows. Rebels also fabricate humans: males to fight as the loyal warriors of their captain-mothers. Dinitra’s loyalty to the Sowers is tested when she’s captured by rebels and learns that everything she’s been taught is a lie. The only things she can believe in are her mutant battle dog, 12, and Fir, the warrior-son she helps free and comes to love, a shameful crime everywhere that could cost both their lives. The Bond won a Foreward Indies Bronze in 2018. 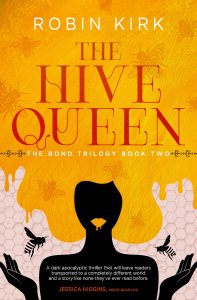 In The Hive Queen, that warrior, Fir, escapes his captain-mother along with his brothers. Now, he’s responsible for their lives — and deaths. On their quest for freedom, he encounters a mutant Hive Queen who compels Fir to betray his brothers and possibly Dinitra. Fir must choose between them, his allegiance to the Queen, and his love for Dinitra. “Kirk takes what we know of this world, flips it on its head, and takes us even deeper than ever imaginable. Yet through all of this world-building the story doesn’t slow down in the slightest. There’s just action followed by more action and topped with a dash more action,” wrote reader Zoe L. on Goodreads. 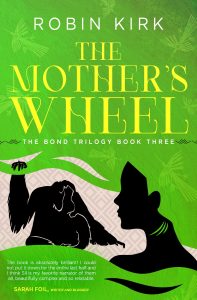 The Mother’s Wheel is the thrilling conclusion. The mutant frog-girl Sil, who readers meet in The Bond, leads a ragtag group of desperate refugees to hoped-for safety in the jungle called The Deep. Along the way, they meet savage vulture-humans and a talking orangutan who loves poetry and guards the narrow path. Safety proves elusive as the refugees are pulled back into the war between the Sowers, the rebels, and the Hive Queen unfolding on the heights. Will love or hate rule? Who, in the end, can you count on as family when you are the only one of your kind? Their destinies entwined, Sil, Dinitra, and Fir reunite and must choose between each other and the worlds they once called their own. “The Mother’s Wheel is a triumphant end to this thought-provoking YA sci-fi trilogy and asks just how much you are willing to do for the ones you love,” writes bookstagrammer Kevin’s Corner.

WRITING A TRILOGY IS… AN ADVENTURE. When I completed a draft of The Bond many moons ago, I was pretty satisfied with the story. Yes, I’d realized new things about it as I wrote, but I was pretty sure that this was the story I was compelled to tell. Then my son, in elementary school, asked me if I planned to write more about this world. His reasoning for supporting more story was strategic. “Boys,” he said, in all of his boyish authority, “want to know what they’re getting into. They like series because they’re already familiar with the world and the characters. Don’t you want boys to read your story?” Whether he’s right or wrong could be debated. But as I mulled this over, I realized there was more I wanted to say, in particular about the nature of freedom and what it means to be human, intersecting with my dedication to human rights. While freedom makes you, well, FREE, it also makes you responsible, including for your own mistakes — sometimes catastrophic ones.

SWITCHING MAIN CHARACTERS IN A SERIES IS… AN ADVENTURE. Once I realized I wanted to write more in this world, I also found that I didn’t want to stick with the same point-of-view character. Having different and sometimes conflicting points of view in a book (a la “A Song of Ice and Fire” series by George R. R. Martin) is my sweet spot as a reader. In this case, I went from my spunky heroine, Dinitra, to my more moody and doubtful Fir. In Book III, I really had fun writing from the perspective of a mutant frog-girl Sil, the only “version” of this mutant that survived. This allowed me a lot of space to examine notions about gender, belonging, tradition, family, and friendship, among other things. I do think gender is mostly what a society says it is and some of us feel that we’re being forced to think or act in certain ways. Being a leader doesn’t come easily to Fir, especially after he makes a mistake that costs lives. Fir really struggles with what it means to be responsible for the lives of others especially when the choices he must make are really hard. And being the only one of her kind is tremendously lonely for Sil until … well, you have to read the book! I take a lot of strength from the decision Philip Pullman made in his “His Dark Materials” series, switching from Lyra to Will between The Golden Compass and The Subtle Knife and The Amber Spyglass.

BACKING MYSELF INTO A NARRATIVE CORNER… IS AN ADVENTURE. Again and again, I wrote myself into a corner, then had to figure out what to do. There’s something magical about that, if you are staying true to the characters. IRL, we are always backing ourselves into impossible situations. Then we reveal ourselves in how we choose to move forward. The same is true for our characters. No one is perfectly composed all of the time: perfectly prepared to make a graceful entrance or exit. And that imperfection, that challenge — of what to do when there is no easy decision or exit — is where I often find the real core of my characters and my story.

WRITING IN A PANDEMIC IS… AN ADVENTURE. One thing I’ve learned about the months of isolation and grief during COVID is that even as the world is falling apart, normal life continues: joys, grief, boredom, fights, bad behavior, and moments of grace. It’s a challenge to keep at the writing. But it’s also necessary and life-sustaining and creatively provocative. I think I wrote some of my best pages in The Mother’s Wheel, in part because the themes of real life were also the ones I was struggling with on the page. Those of us who write post-apocalyptic stories saw these scenes play out in front of our eyes (and continue to with the terrifying reality of climate change). Maybe, I wondered, we weren’t bold enough with the worlds we imagined, the choices of the characters we conjured. I think few of us are able to grasp what many in countries that suffered genocide know: that most people go along with injustice and don’t protest. They start to get used to the new normal, like the proverbial story of a frog slowly heating in the pot of water. But some — thankfully so — stand up. They also need our stories to keep going and keep insisting on what’s right. (And we need to be standing up, too.) 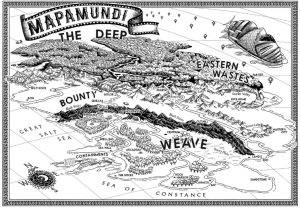 Map from The Hive Queen.

HAVING A MAP IS AWESOME: I love visuals in books. I mean… I LOVE THEM. Perhaps this stems from an early exposure to Ireland’s Book of Kells. Once you see an illuminated manuscript, there’s no going back. Did you know that some monk-scribes wrote in all sorts of hilarious and profane marginalia in sacred texts? And maps. Maps! Map-maker (and children’s author) Travis Hasenour did the Trilogy map. He based it on some of my scribblings, but did such a wonderful job, including in designing a version of the ships that travel The Signal Way in The Bond. It adds so much to the story.

Robin Kirk backs herself into corners with some frequency in Durham, NC. She’s the author of The Bond, The Hive Queen, and The Mother’s Wheel. Her short story, “Love is a Wild Creature,” is featured in Wicked South: Secrets and Lies: Stories for Young Adults. Her short stories and poems have also appeared in speculative fiction and other publications. Kirk has published three nonfiction books on human rights in Latin America as well as essays, articles, short stories, and op-eds. She teaches human rights at Duke University.