Jonah and Reed arrive at the three-month mark on Saturday. They can hold their heads up, smile, and coo. They also moved from bassinets to cribs. Each one has a pillow with his name to make sure they end up in the right crib. Jonah landed the prime spot by the window looking out at a tree, though he’s not yet old enough to appreciate it and Reed to comprehend his disadvantage. 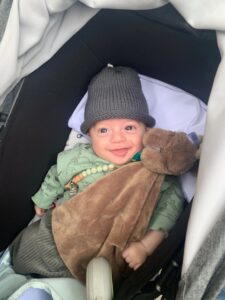 Happy Jonah in his stroller.

The first night in their cribs, the two boys fussed, as if they knew their environment had changed. Jonah, who usually sleeps through the night now, kept his parents awake all night, while Reed adapted more quickly. They aren’t at the stage where they keep each other awake, and both are generally good at sleeping through the noise of the TV or guests. Jonah enjoys watching sporting events of all kinds on the large-screen TV, while Reed pays attention at first but loses interest quickly and glances around the room instead. Jonah is quick to smile and charm visitors. Reed likes to observe. In one video she posted to Facebook, Lindsey says to the boys, “It’s bath time! Who wants to go first?” and Jonah lets out a huge wail. He generally does go first with feeding, bath, and bed while Reed likes to hang out and take his time. 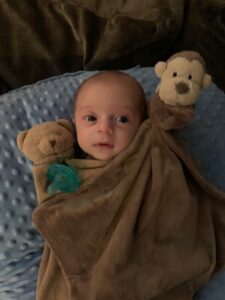 Reed peeking out from his blanket, surrounded by toys.

Even identical twins have their own personalities. In fact, they can be very different if they’re mirror twins, with, say, one twin right-handed and the other left-handed. We’re pretty sure Jonah is right handed, but Reed doesn’t seem to show a preference yet. 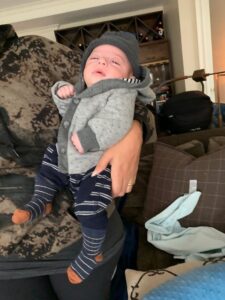 Lindsey with Jonah, back from shopping. Reed stayed home.

This weekend Derrick has the twins alone because Lindsey is going upstate with some friends. It will be the first time one of them is responsible for the two. A rare advantage of the pandemic (besides Lindsey being able to work from home during her pregnancy) is that both of them are around to cover the needs of two helpless little people. This weekend Richard and I will be helping out so Derrick doesn’t have his hands full. However, he’ll have to wake up early, since he usually covers the late night feeding and Lindsay gets up for the morning one. I’ll update with any significant milestones that occur this weekend. 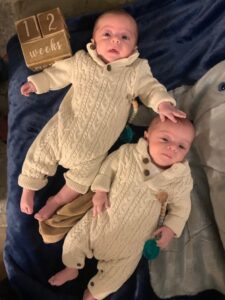 Jonah with his hand on Reed. They still don’t know who they are.

Otherwise, I look forward to getting to know the boys better and also plan to take advantage of their HBO Max subscription to watch the documentary Class Action Park. I remember the ads for Action Park but was too risk-averse to give that hazardous amusement park and libertarian paradise in northern New Jersey a try. I’ve always wondered how the closed 360-degree loop water slide worked, because it seemed like people would just get stuck at the top of the loop. I hope that whichever twin watches the documentary with me doesn’t get any ideas, because if the park had been open when Derrick was a teenager, he and his friends would certainly have gone.

Derrick told my mother that he sees a lot of cute babies, but Jonah and Reed are by far the cutest. Leaving aside the novelty of identical twins, I’m sure almost all new parents feel that way about their babies. That’s why they drop everything to take care of the little ones day and night, until their babies can take care of themselves — and can get into trouble and talk back along the way.