Categories Menu
Home » Blog » Travel, With and Without Baggage

Travel, With and Without Baggage

The hiatus between my last post and this one has been longer than expected, in large part because fog and airline misconnections left my family stranded an extra day in Zurich. Since then, I’ve had to play catch-up with at least one fewer day and greater exhaustion from our long trip. (Excuses, excuses!) 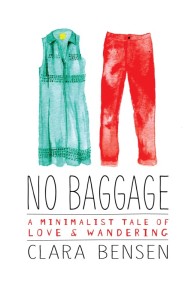 On the nine-hour flight back to New York City in dirty and mismatched clothing, I treated myself to a just-published travel memoir, Clara Bensen’s No Baggage: A Minimalist Tale of Love & Wandering (Running Press, 2016). Several years ago, at the age of 25, Bensen embarked on a three-week journey from Istanbul, Turkey to London, England with only a green dress, sandals, three pairs of underwear, and a guy she met a month earlier on OKCupid. That guy, Jeff, had only one pair of underwear. And a Stetson hat.

Two years before meeting Jeff, the author had suffered a nervous breakdown that left her incapacitated and unable to eat, confined to her childhood bedroom. Her crippling anxiety occurred shortly after college graduation. For a cautious young woman struggling with major life changes, an unplanned trip with an older man devoted to adventure and spontaneity seemed like a recipe for disaster. For my family, who require dinner reservations weeks in advance (and for my foodie husband, the quality of the restaurant is a major consideration), this would have been a recipe for disaster. 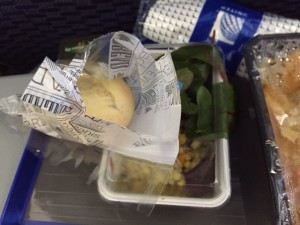 Foodies beware! There was mold on the bread of my airline meal.

Bensen intersperses the events of her travel to Istanbul, Izmir, Athens, Delphi, Budapest, Sarajevo, Dubrovnik, Edinburgh, and London with flashbacks to her two-year struggle with anxiety and the beginning of her relationship with Jeff in Texas before their departure. Throughout, they two of them struggle to define their relationship. Are they girlfriend/boyfriend? Just friends? Friends with benefits? Before leaving, they agreed on an exit strategy if things fell apart between them, but what would happen if things didn’t fall apart and they returned home together? As they go from Couchsurfing stay to night buses — I need to stop complaining about my long flights because their bus trip from Athens to Budapest lasted 23 hours — they encounter a variety of mishaps and experience the kind of wonderful serendipity that occurs with travel. Even us travelers who pack heavy suitcases (we’re all looking at my son’s girlfriend here) and make reservations for AirBnB’s, hotels, restaurants, and trains enjoy unexpected pleasures, even when things go wrong. 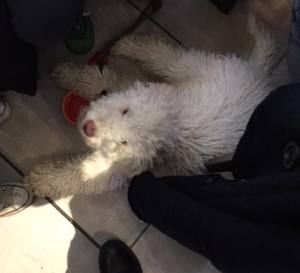 A truffle-sniffing dog awaits more mundane treats to fall at the Central Market in Florence.

The synagogue that I wanted to see in Venice was closed, but I heard a dog sing “Feliz Navidad” along with street musicians.

Maddy saw dogs invited to bars and restaurants all over Italy and now wants to emigrate with Charlie. One was a rare truffle-sniffing dog.

We met a woman from Texas who married an Italian man, and they opened a restaurant in Venice that we voted the best of an amazing bunch. (More on that, with pictures, in Richard’s restaurant roundup.)

Son Derrick’s send-up of our standby status left us howling with laughter in the middle of the Zurich airport. 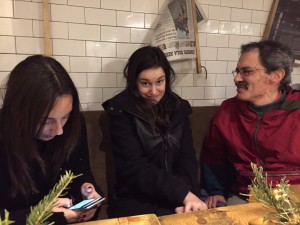 Family time with (from left) Lindsey, Maddy, and Richard.

Mainly, we enjoyed our time as a family together, which we wouldn’t have done if we’d stayed in our separate apartments and made our own way through the wilds of New York City. That togetherness of family, friends, and strangers (and near-strangers) in parts unknown is ultimately what informs No Baggage and gives the memoir its humor, insight, and appeal.

While flying home with suitcase in cargo hold and backpack threatening to cut off the circulation in my legs, I contemplated taking only a single change of clothes on my next trip. Despite the fact that my next destination is Portugal in May and June, where clothes will dry quickly, I don’t think I’ll go that far. Anyway, I work as a translator and will need my dictionaries (plural) and laptop to do my job. But No Baggage offers much food for thought, both about what things we really need and the inescapability of “baggage” in our relationships and lives.