Tyrannies of Right and Left

This weekend I’ve signed up for a workshop to help me get back into my YA verse novel, which I put aside when my middle grade verse novel Moonwalking sold on proposal and I actually had to write the book. The YA takes place in Portugal in 1967, during the right wing dictatorship of António de Oliveira Salazar, and my 15-year-old protagonist chafes against her life of confinement. Leaving aside my other deadlines, this was a difficult novel to focus on while we suffered our own confinement during the Covid-19 pandemic. Now that I’m triple vaccinated, I’m ready to get back to work. 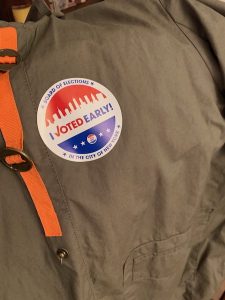 Another motivating factor for this book is our growing awareness that the victory of democracy last November has turned to be somewhat fleeting, with increasing restrictions on women’s bodily autonomy and freedom of speech in K-12 schools and universities. State officials are seeking to ban what they call Critical Race Theory in schools, with little understanding of what CRT is. It seems that CRT has become an umbrella term for any teaching about slavery, racial injustice, conflict, or how families and communities may see their past and present from different perspectives based on their experiences. In some cases, school districts have banned books and disinvited authors only because they’re Black, citing CRT as the reason.

A few years ago, I got into some trouble for arguing that, once a problematic book has been published, it’s better to open up a discussion about the book — in essence, using it as a teachable moment — rather than pulling that book off the market. (Ideally, publishers would prioritize books by authors who shared that lived experience or else use targeted expert readers to address problems ahead of time.) I said then that “canceling” books on our part would one day be used as justification for silencing our books.

One one level, I was right, because we’re now playing defense against a huge wave of right-wing censorship. On another level, I was wrong, because the censors don’t need justification to do what they do. If they don’t have fodder, they make it up. Like most bullies and the institutions that support them, the tiniest “infraction” by their targets is used to justify the swift retaliation of the powerful against the powerless.

Along with these new restrictions has come a distrust of science and expertise of any kind. The refusal of the former president’s supporters to get vaccinated for a deadly virus is cult-like; the vaccine refusers risk death and permanent disability to prove their fealty to their cause. Some have called for the imprisonment or execution of scientists if their leader returns to power and initiates his promised “revenge tour.” 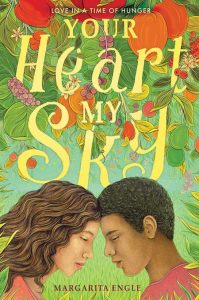 I recently read a YA verse novel that addressed similar themes of censorship, repression, and disdain of science as a comparative title, or comp, for my work in progress. The book, Margarita Engle’s Your Heart, My Sky: Love in a Time of Hunger, doesn’t portray a fascist dictatorship like the one in Portugal or the one many fear in the U.S. Rather, it’s set in Communist Cuba in the early 1990s, a land ruled for more than 30 years at that time by one man — Fidel Castro.

Liana and Amado are the only teenagers left in their seaside village, the others having “volunteered” (or been “volun-told”) to harvest sugar cane in the mountains. That alone makes them politically suspect, even more so for Amado because his older brother, a pacifist, is in prison for refusing mandatory military service. They are starving along with everyone else in their community because the Cuban government has mandated the cultivation of a single crop for export, and now that the Soviet Union has fallen apart, no country wants sugar cane and none (except for a handful of tourists who are given what little food is left) will bail out the island’s failed economy. And the economy failed because its long-serving unelected leader would not listen to scientists and economists who urged him to diversify his agriculture and allow his people to find their own solutions to problems.

While foraging sea creatures and wild vegetation, a stray dog leads Liana and Amado to each other. Despite their overwhelming hunger, they fall in love. Using seeds and dimming know-how from Amado’s grandfather, they cultivate an illegal garden — illegal because the regime believes they’ll sell on the black market and is willing to let them starve to prevent that — along with other illicit dreams.

Among those dreams is living in a country where food is plentiful, neighborhoods aren’t full of pro-government spies, and the wrong political stance (or even survival initiative) won’t land someone in prison. Together and in private, Liana and Amado consider the risks and rewards of fleeing on a rickety boat and who and what they will leave behind. “Should I Stay of Should I Go?” is a common element of historical novels set in tyrannies when protagonists cannot pursue their dreams, or their lives are on on the line. In Your Heart, My Sky, the author explores their thinking in melodious, heartfelt poems that convey what the island, its people, and its wildlife mean to Liana and Amado.

I suspect a lot of people will read Your Heart, My Sky as a condemnation of Communism, which it is. It will not appear on any state’s banned book list. But this powerful book is a “read between the lines” cautionary tale about what can go wrong when any unelected leader rises to power, even one installed with the support of a majority of the population. The same can be said for leaders who come to power through election, if those elections aren’t free and fair, if some populations don’t have the same access to the vote, and if voters’ choices don’t count equally. If leaders don’t fear removal through the ballot box, they have no incentive to rule humanely or even rationally. Democracy may be annoying, and we may not always get the result we want, but whoever we end up with in competitive elections is better that whoever we’d end up with if we didn’t have that choice at all.