World Cup mania has taken over at my house, as I’ve risked missing important deadlines not only to watch the games but also to post news updates using my Lego minifigures. Since I don’t have any uniformed minifigures, most of my updates have centered on the activities of my fans with their custom-made country flags. I’ve also been following the Luis Suárez biting incident with a fascination that probably reveals more about me than anything else. Why Luis Suárez?

Even though girls love a bad boy, this homely striker has nowhere near the fan base of more attractive bad boys like Cristiano Ronaldo. Nonetheless, Suárez is worshipped in his home country of Uruguay, where he represents the grit of a tiny nation that has become a major power in the sport. Despite its population of three million, Uruguay has won two World Cup championships — the debut contest in 1930 and the 1950 match that broke the hearts of host Brazilians. Uruguay’s 2-1 victory in that match, in giant Maracanã Stadium in Rio de Janeiro, is still known as the Maracanaço, or Maracanã Blow, a moment of national humiliation that destroyed the career and life of goalkeeper Moacyr Barbosa.

In December 2011 my family traveled to Uruguay to see the country and its soccer (the sport known as football everywhere else in the world, by the way) obsession. My son, Derrick, is a huge fan of Uruguay’s national team, especially of Suárez’s good-boy teammate Diego Forlán. Derrick had some meetings for work in nearby Buenos Aires, Argentina, so we figured we’d visit Argentina’s often-bypassed (except by Argentine vacationers) neighbor. We spent about a week there, dividing our time between the resort town of Colonia and the capital city, Montevideo. In my next post, I will try to answer some frequently-asked-questions about Uruguay, but here, I’ll talk specifically about the country’s soccer obsession and its portrayal in the  indie film 3 Million. 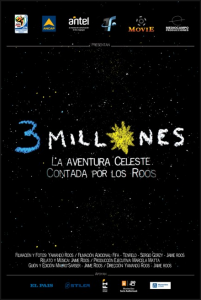 Derrick and I saw 3 Million together at its U.S. premiere in August 2012, at the Latin American Film Festival in New York. The father-and-son filmmaking team of Jaime and Yamandú Roos spoke to the crowd afterward, and Derrick has kept in touch with Yamandú, who now lives in Amsterdam.

3 Million tells the story of two journeys: of the underdog team that made the Final Four in the 2010 World Cup in South Africa, and of a father and adult son who live an ocean away from each other and who hadn’t seen each other for 18 months before this remarkable road trip. The father, Jaime Roos, is a popular musician living in Uruguay, though the military dictatorship that ruled the country in the 1970s and early 1980s forced him into exile in the Netherlands, where Yamandú was born. They returned to Uruguay when Yamandú was a toddler, so he grew up in a country where every vacant space has been turned into a soccer pitch and everyone — schoolchildren and street children, managers and manual laborers — plays in their free time. Popular singers like  Jaime extol the feats of local heroes and international stars (along with other themes, including political ones) in a music theater genre called murga. Yamandú decided to attend university in the Netherlands, his birthplace, and remained there for work in the film industry. Jaime’s connections gave the filmmaking crew inside access to the team and other dignitaries, including Alcides Ghiggia, who scored the winning goal in the 1950 Maracanaço. 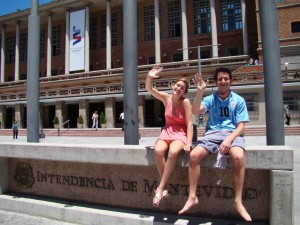 My adult children, Maddy and Derrick, at the Intendencia (City Hall) of Montevideo, Uruguay. Derrick wears the shirt of his favorite player, Diego Forlán.

3 Million conveys the energy and excitement of the tournament and Jaime and Yamandú’s wonderment at traveling through South Africa, a country neither had ever seen before. We see the connection between Jaime’s political activism and the anti-apartheid struggle, as well as his enthusiasm at hearing the popular music of a distant land and culture. Just as compelling is the development of the relationship between Jaime and Yamandú, which speaks to how parents and adult children reknit their bonds to each other when children become independent and move in their own directions. Seeing Jaime and Yamandú in the film, and then seeing them together at its premiere — where Derrick and I observed their love and respect for each other — was an emotional and inspiring experience for us as we enter a new relationship between a mother and an adult son.

For those who wonder at how Luis Suárez could be treated as a national hero despite biting an opponent (and handballing a potential goal in the 2010 contest), 3 Million answers a lot of those questions. It also touches on the universal theme of changing parent-child relationships and contains memorable images of South Africa and of “the beautiful game.”