Vanquished in the Ice Cream Wars

In 2018, Il Laboratorio del Gelato opened an outpost on the southwest corner of East 10th St. and University Place in Greenwich Village, a direct challenge to international ice cream chain Amorino. At the time, Richard and I lived on the corner of East Houston and Avenue A in the far East Village, and the flagship Lab de Gelato on the corner of East Houston and Ludlow St., a block away from us, was our go-to ice cream purveyor. My love of the Lab goes way back to when it first opened around 2005 on the Lower East Side across from the Tenement Museum, and we stopped there each year on the Congregation Gates of Heaven seventh grade field trip. 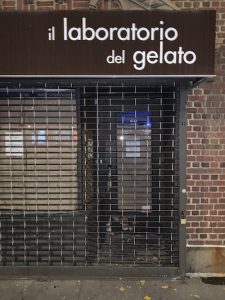 We cheered for the Lab’s success in its new location. Nothing against Amorino, but like all big chains, its calling card is consistency. One can expect the same ice cream experience in Lisbon, Portugal as in Fort Worth, Texas. I do like their chocolate hazelnut ice cream, called “L’inimitabile,” but quickly become tired of it. And I appreciate the fact that they send home some nice wafer cones with hand-packed pints. Lab, on the other hand, has a revolving list of flavors — some ordinary (dark chocolate, chocolate chip, etc.), some strange (cheddar cheese, wasabi, peppercorn), and some best-in-class. (My daughter Maddy is a fan of the fresh mint.) 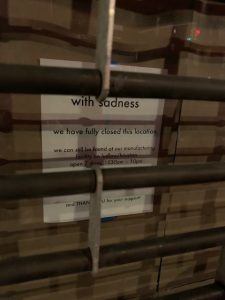 The new outpost immediately faced obstacles. The first was an intrusive sidewalk shed that blocked its sign and made the shop look dark and uninviting if not outright closed. In its first winter, it posted short hours and closed several days a week when the NYU students weren’t around. Then the pandemic hit, followed by broken windows during the 2020 protests. Even worse luck happened this summer, when the stores electrical system failed. We found out when we came to buy prepacked pints and saw the freezer empty. Apparently, the power had gone out overnight and all the ice cream melted! In all, equipment failures caused some of the ice cream to melt in the tub, right in front of customers, while other tubs were frozen solid, too difficult to scoop. The little store caught a small break when a sidewalk shed went up in front of Amorino across the street, but that shed was recently removed, while the Lab’s remained.

Last week, my son Derrick was in the car, driving back from taking the twins on an outing, when he saw the metal gate in front of the Lab’s door and windows, at a time it was normally open. “Nooo!” he cried. He asked Lindsey, who was driving, to stop. He jumped out, only to see a forlorn sign on the door.

we have fully closed this location

and THANK YOU for your support

At least there’s hope for what has become Derrick’s favorite ice cream place in the city, though he’ll have to eat at the store, invest in an insulated freezer bag, or walk quickly if he wants to get back before his take-home pint melts. 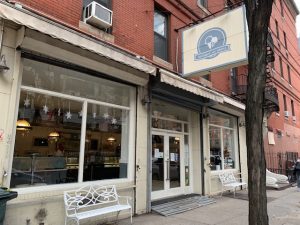 I’m feeling a bit guilty, though, because I cheated on the Lab — a store with which I have a long history — as I began to patronize a newcomer to the neighborhood. Sundaes & Cones, on East 10th St. between Third and Fourth Aves. Sundaes & Cones’s owners come from Hong Kong, and it is one of a number of food purveyors in that neighborhood with East Asian connections — among them the H Mart, Sunrise Market, the dumpling chain from China Tim Ho Wan, and a number of sushi restaurants. 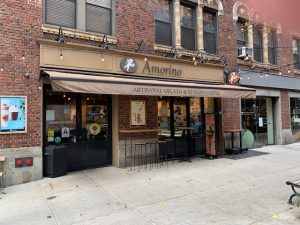 Victorious Amorino, in this cone-eat-cone world.

Today I stopped in at Amorino, where the staff had a triumphant expression and most of the indoor dining seats were filled. In this competitive environment, one person’s gain often depends on another person’s loss. It doesn’t always have to be this way, however, and it’s important for us to look for ways to expand the pie rather than snatching the existing pieces from each other.