Categories Menu
Home » Blog » We Are Not Exceptional

We Are Not Exceptional 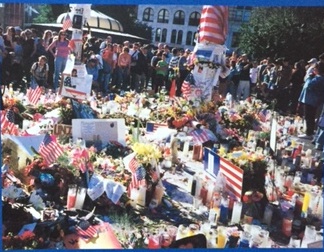 The cover of the Summer 2002 issue of MultiCultural Review, which I edited, featured this photo with a tribute by the late MCR writer and poet Zöe Anglesey.

I, too, saw the burned out remains of the World Trade Center, where I’d gone once for a passport renewal and another time to see the offices of the Regional Planning Commission for an assignment in an undergraduate urban planning class. After the 9/11 attacks, I remember the messages attached to chain link fences and the walls outside fire and police stations, messages of condolence and solidarity from around the world. Many of those places were no strangers to terrorism and tragedy. Until 9/11 we in the United States had felt insulated and safe. Two world wars had devastated Europe and Asia but barely touched us. The post-WWII wars and deadly civil conflicts in other lands did not affect us — despite our involvement in Vietnam, Chile, El Salvador, Iran, and elsewhere. We sometimes sent messages of solidarity to other peoples, but we were never the recipients of condolences.

The messages of sympathy from other lands after 9/11 seemed to me an embrace, a welcoming of this country into a community of people who had suffered but survived. They told us we were resilient, we too would grieve our losses and move forward knowing the whole world was on our side. I found those messages incredibly moving, because they told us we were not alone.

The sense of being alone, independent, able to stand up for ourselves and lead others is a large part of the idea of American Exceptionalism, along with the U.S.’s dynamic, relatively unfettered capitalist economy and values of personal liberty and democracy. The events and aftermath of 9/11 challenged that exceptionalism, but at least in New York City, there were positive changes as people started to talk to each other more and help our neighbors. It seemed that people took to heart the messages of caring and love from all over the world. 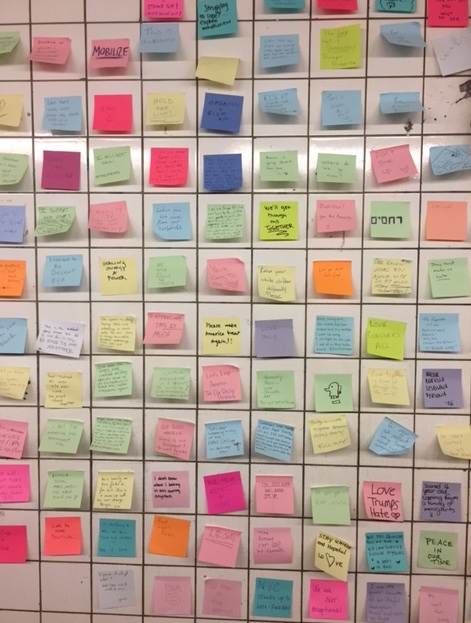 Messages on the wall in the tunnel of the 14th St. subway station between 6th and 7th Aves.

Fifteen years later, New York City and the country has endured another cataclysm, one that like 9/11 has shaken us to the core. After we came together against terror and violence, after we elected a Black president and then gave him another term, the pendulum swung. It swung as it had following the social and artistic flowering of Weimar Germany, and the heady early years of the Russian Revolution. Hope and possibility have given way to hatred, fear, and the adulation of brute force. Utopia has become dystopia.

The world has reacted with alarm. A children’s literature scholar from the UK, where they are grappling with their own groundswell of xenophobia in the form of Brexit, writes, “Sending you all much love in what will be a Time of Trial.” Initially, New York City felt like a safe island of diverse, open-minded people. The night the polls closed, our ordinarily lively neighborhood was as quiet as if a natural disaster had occurred. The next day, people began posting messages of reconciliation in the subway tunnel along 14th Street between 6th and 7th Avenues. Post-it notes in many colors spread along the walls, New Yorkers telling ourselves that we’d get through this crisis if we stuck together — the same way we did after 9/11. 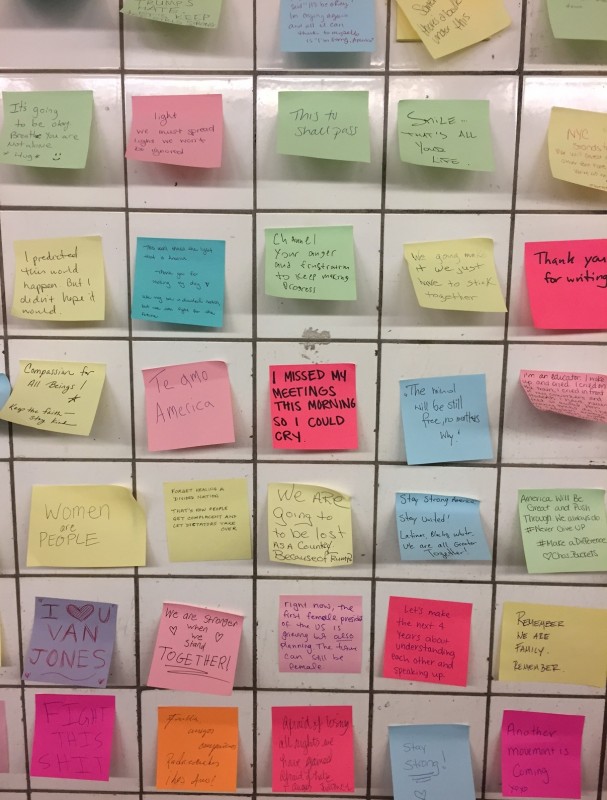 More messages on the wall.

Then the hate crimes began, not only in the hinterland, but in the heart of our city as well. Three young Trump supporters beat up a gay man in my neighborhood and ran away. A Hillary supporter in a restaurant in one of Brooklyn’s hippest neighborhoods was discussing her dismay at the election with a woman friend when a Trump supporter struck her in the face and again ran away. Tomorrow I am flying to Atlanta for a conference, and I fear who might be sitting next to me on the plane.

As white nationalists and police-state advocates fill the ranks of the new government, as businesses that opposed the President-elect prepare to be punished and their crony competitors elevated, as hate crimes escalate, American Exceptionalism seems less exceptional every day. As someone who has advocated for human rights throughout my life, I never thought I would live in one of those countries where we feared both our government and each other. But I am also a student of history and I can recite those times where the government became an oppressor and our neighbors became invaders. Because what seems most “exceptional” about the United States is the lack of awareness of our own history, I will recite those times:

No, we are not exceptional. In fact, we never were.