My friend Edi Campbell of Crazy Quilts tweeted the words, “We’ve lost a library” when I sent out a link to her eloquent tribute to Walter Dean Myers, who passed away the day before yesterday at the age of 76. I can’t think of a better line to express the impact of this loss. Myers was the author or co-author of more than 100 books for children and teens — most of them featuring African-American protagonists whose heritage he shared — over a career that spanned 45 years, including four books to be published posthumously. 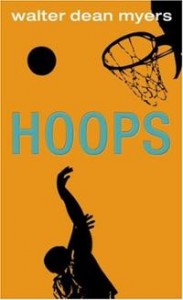 Published in 1981, Hoops was one of Myers’s earliest YA novels.

He was also a leading advocate for diversity in children’s and YA publishing. Growing up in poverty in Harlem, Myers enjoyed reading but felt out of place in the pressured academic environment at Stuyvesant High School in New York City. He dropped out of high school and joined the army, but he continued to write stories as a teenager and young adult. He believed he could write — that he had the right to write and his stories deserved to be read — even though he didn’t have a high school degree and there were few authors of color to serve as role models and mentors.

I was in library school when Fallen Angels came out in 1988.

Walter Dean Myers paved the way. His stories reflected the authenticity and urgency of someone standing up to difficult circumstances and a society that said he wouldn’t make it. The first novel of his that I read, Fallen Angels, was a memorial to his half-brother who died fighting in Vietnam. It was honest and real, and it inspired me to be honest and real in my own writing. At that time, I was a graduate student just beginning to write for teens, and I had a lot to learn. I met Myers several times during the 1980s — once at a conference sponsored by the Cooperative Children’s Book Center at the University of Wisconsin, Madison (where I received my degree in Library and Information Science), and twice at the New York Public Library’s “Books for the Teen Age” reception, where he always had multiple books on the list. He was as gracious and generous in person as he was in his books, going out of his way to encourage young writers, teachers, librarians, and readers. 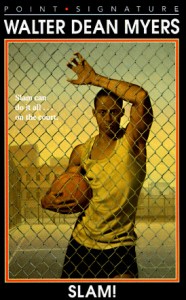 My son played basketball in middle school, and Slam was his first encounter with Myers’s work. He was hooked.

Over the next decades, I would read about two dozen more of Myers’s books. I sent many of them out for review when I was editor-in-chief of MultiCultural Review. He was my son’s favorite author in middle school. Until then, Derrick only read nonfiction if he read at all. After he read Slam, he read every other one of Myers’s novels that he could get his hands on in our suburban town and requested that the school and town library buy additional ones. Fortunately, I met Myers at several conferences when Derrick was a teenager and was able to get several books signed to him. Every time I saw Myers, he remembered me and after I asked him to sign books, he always asked about my son too. I won’t be able to tell him now, but I can tell you that Derrick at age 27 is an avid reader with interest and curiosity in the world around him, and that the work of Walter Dean Myers has contributed to the person he is today. 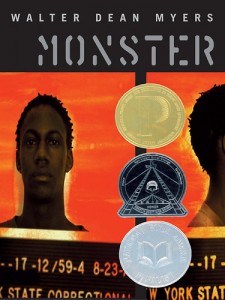 I know there are other people who can share stories about how Myers and his many books inspired them and their children. And while he had enormous talent and drive, he never forgot the obstacles he had to overcome or those faced by young writers coming up behind him. He served as a leading spokesperson on behalf of diversity in children’s and YA literature and the presence of writers of color among the ranks of published authors. Less than four months ago, he wrote a piece in the New York Times titled “Where Are the People of Color in Children’s Books?” Because of who he was, he had the ear of top journalists and publishing executives. He was respected by all, and when he spoke, people listened. 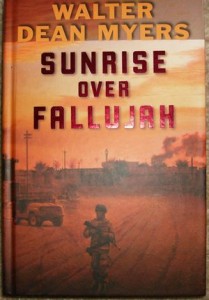 Another generation, another war. Myers’s 2008 novel Sunrise Over Fallujah.

Myers has passed away at a crucial time. His New York Times article voiced frustration at the fact that protagonists of color continue to be vastly underrepresented at a time in which our country is becoming more diverse. Since then, the selection of an all-white and male panel at BookCon prompted the #WeNeedDiverseBooks campaign. With #WeNeedDiverseBooks, the torch has been passed to a new generation of activists, but Myers served as a role model not only as a successful writer but also as a spokesperson who had gained the respect of everyone in the industry.

We may no longer have his leadership, but we have his example — just as the “library” that we lost lives on in the diverse books that he published and the ones that we now write. 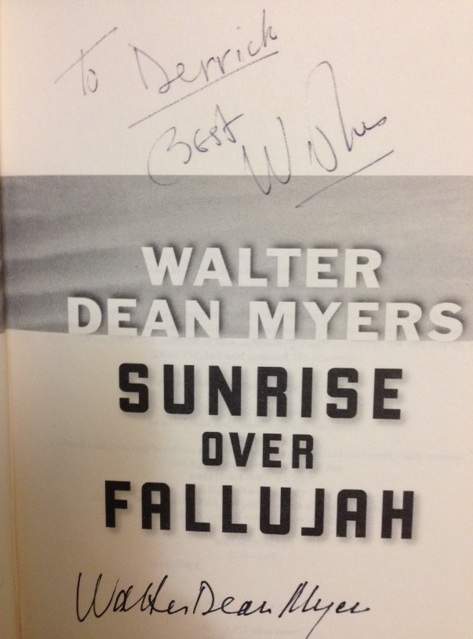