What I Learned from the Pneuma Creative Workshop 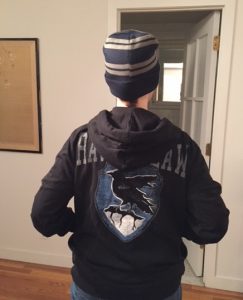 Ready for my week in the country with my new Ravenclaw gear.

On Sunday I returned from the first of two workshops I’m attending this month. Sponsored by the Facebook group Pneuma Creative — the brainchild of author and writing coach Heather Demetrios — the workshop focused on revision and meditation and the relationship between the two. The five-day workshop took place at the Highlights retreat center near Honesdale, Pennsylvania, a place I highly recommend to writers in all categories. Highlights sponsors its own workshops with prominent instructors, but anyone can sign up for an “unworkshop” and pay the $129 daily rate for room and board; the Pneuma Retreat was not sponsored by Highlights and thus an unworkshop. Also, un-workshopping at the same time were four members of my VCFA class, the Secret Gardeners, including my sister blogger L. Marie. What a wonderful surprise! This year, I stayed in one of the Highlights cabins rather than the Lodge and appreciated the privacy, the cozy comfort (excellent heat and a/c, and that week, we needed both), and the delicious food. I also had a chance to explore the woods beyond the Highlights campus, and weeks of rain have left the creeks high and the vegetation unusually green for this late in the season. 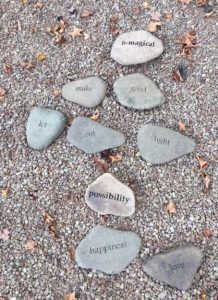 Behind the Barn where they serve (outstanding) meals is a Word Garden, where we can move stones around to write poetry.

The Pneuma Creative workshop featured critiques in the morning, instruction in different forms of meditation in the afternoon, and craft lectures in the afternoon and evening from Heather and YA author, screenwriter and teacher Ingrid Sundberg, along with games and lots of free time to write. I discovered that writing in the same room where I slept gave me insomnia, so I carved out a place in the loft of the Barn. Unfortunately, I didn’t get as much writing done as I’d hoped. I’d come with high hopes of revising the second half of my #OwnVoices historical novel and fixing some of its pacing problems toward the end. But my workshop mates informed me that my third try at the novel’s beginning wasn’t working because they had no idea what was going on. I have a tendency to drop readers into the middle of the action — a hook! yay! — but the problem with the approach is that readers may not care about the characters in peril, and they may be so confused that they don’t get into the story at all. Aware that the 15 pages of my troubled beginning could sink 350 pages of gripping story later on, I was, to put it mildly, disappointed. Heather and my fellow workshoppers Shelly and Michelle came riding to the rescue. They suggested side writing to bring out the POV character’s motivation and his relationship to his two best friends. I realized that my autistic protagonist, who has the longest and most difficult journey of the three teens that make up the collective protagonist, needed a stronger presence in that first chapter. After all, the chapter’s POV character “anoints” him to carry their struggle forward, and he is the one whose narrative concludes the book. I grappled with the question of how much background information to include in a work of historical fiction set in an unfamiliar time and place when what I really want to do is portray a friendship, literally, under fire. In other words, does the reader need the background information right away, or is it more important to draw them in via characters whose relationship has strong emotional and physical stakes? 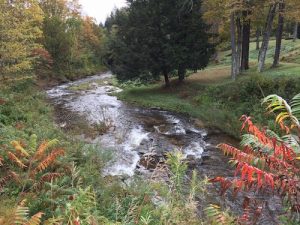 Enjoying the journey as much as the destination.

So instead of revising the entire second half, I did a lot of side writing and used it to rewrite the opening scene as well as expand a later scene in the first chapter. I’m pleased with how my autistic character’s personality and attitude toward the schoolmates he wants as friends comes through right away. But I also learned that I can’t revise from a place of fear — fear that I’m throwing away 350 great pages if I don’t get this right. I need to be inside the story, experiencing it along with my characters, learning about the world along with my autistic protagonist, and enjoying the process as much as the destination. 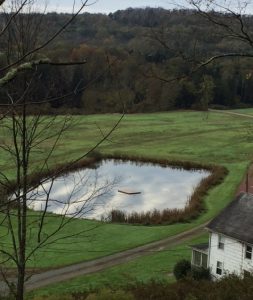 Too cold for the old swimming hole today.

The workshop featured some unexpected victories as well. One night we played What Do You Meme? — a game my daughter likes but I’ve never actually played before. And I walked away with all the meme cards, shocking the seven other players. Maybe it’s my quirky sense of humor, or maybe I just ended up with the funniest caption. Or maybe I spend way too much time on social media without realizing it. In any case, if Maddy reads this, I expect she’ll be proud of me. I also read two poems from my new verse novel and came to realize I love performing poetry. I’d approached this novel with the feeling of, “I’ve never written one poem; how am I going to write 100?” (which isn’t quite true, but I don’t consider myself a poet), and I’m now enjoying the process of trying to capture emotion through language the way a musical composition would. When I started writing EYES OPEN, I spoke to my VCFA classmate and verse novelist Cordelia Jensen, who advised me to use visual images throughout the book, but as I’ve continued reading in the genre, I’m also working music into it as Elizabeth Acevedo does in her acclaimed new verse novel The Poet X. I didn’t get any writing done on that book — I’d planned to focus on the other one at the revision workshop, and EYES OPEN is “in-progress” — but I did some side writing to explore my protagonist’s feelings about her first boyfriend. Now to do the side writing to explore how she feels about her second boyfriend. Love triangle incoming!