Categories Menu
Home » Blog » What Is Hybrid Publishing and Is It an Option? The New IBPA Standards

What Is Hybrid Publishing and Is It an Option? The New IBPA Standards

Last year I joined the Authors Guild, an organization dedicated to protecting authors’ rights in the United States. The organization provides a number of valuable services, including contract review for writers who don’t have an agent representing them, and recently, they’ve added contract reviews for literary translators, who rarely have agents because the pay is too low to be worth an agent’s time. My membership is coming due this month, and along with my renewal notice was a link that surprised me.

The link was to the Independent Book Publishers Association (IBPA) and its guidelines for hybrid publishers. One may ask: What is a hybrid publisher and why is it a concern of this blog? After all, I’ve already decided to self-publish via Kindle Direct Publishing my guide to Portugal that compiles this blog’s most popular and useful pieces.

Before the advent of online publishing  services like Lulu.com, Kindle Direct Publishing, Smashwords, and D2D (Draft to Digital), writers whose works were spurned by the traditional publishers had few options. Self-publishing was an elaborate process that required finding a typesetter, a cover designer, and a printer, and figuring out what to do with boxes and boxes of printed books. Years ago when I had my small press, I kept those boxes in my (fortunately, dry) basement. Most people who wanted to see their poems, stories, and memoirs in print went to what were called vanity presses. Vanity presses accepted every book sent to them and charged authors a lot of money to print the books. In fact, knowing that most of the books would never sell, the vanity presses rarely printed the amounts they said they would, and on top of paying them to publish the books, the writers had to buy back personal copies to sell or give to family and friends.

With the advent of cheap digital publishing, vanity presses had to become more creative to make money, but the model remains. These publishers — led by the Big 5-owned Author Solutions and its dozens of specialized imprints — sell editing, design, and distribution services that they don’t deliver, or deliver badly, at a high markup. They accept every manuscript that comes their way. They make their money from authors rather than from selling books. 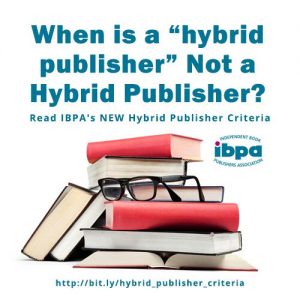 Yes, it’s a start, but the criteria need more work.

Over the past decades, new vanity models have emerged in addition to the direct billing of authors. One requires authors to buy a certain number of books at marked-up prices. Another requires authors to show support for the book by crowdfunding its publication. (The crowdfunding or sponsorship model is actually not a new one, but the way countless artists supported their work centuries ago.)

So when the IPBA issued standards for hybrid publishers, and the Authors Guild gave their blessing by linking to those standards, I started to investigate — because the hybrid model seems to be no different from the vanity model. The money to publish a book comes from the author, either directly as a subsidy, as a commitment to buy a print run, or through crowdfunding.

Here’s how the IBPA explains the difference in its online informational release:

IBPA’s Hybrid Publisher Criteria requires that hybrid publishers behave just like traditional publishers in all respects, except when it comes to business model. Hybrid publishers use an author-subsidized business model, as opposed to financing all costs themselves, and in exchange return a higher-than-industry-standard share of sales proceeds to the author. In other words, a hybrid publisher makes income from a combination of publishing services and book sales.

Although hybrid publishing companies are author-subsidized, they are different from other author-subsidized models in that hybrid publishers adhere to professional publishing standards. Regardless of who pays for editorial, design, and production fees, it is always the publisher that bears responsibility for producing, distributing, and ultimately selling professional-quality books.

IBPA’s Hybrid Publisher Criteria includes the following list of exceptions [sic: should probably be “expectations”] which all hybrid publishers are expected to meet (expanded details here):

IBPA’s Hybrid Publisher Criteria points to functions that a reputable hybrid publisher is expected to perform. It’s up to each hybrid publisher to figure out, and explain, how it performs each function. An author-subsidized business model in no way relieves a publisher of its editorial, design, marketing, sales, and distribution responsibilities.

As I dug further, I found sample covers and interior pages from publishers that IBPA endorsed. Yes, they had a professional appearance, and the writing from the exemplary books — a historical novel for adult readers, a cookbook, a how-to book, and the organization’s own publications — met the quality of traditional books in the same genre.

And then, after I posted in a Facebook group about hybrid publishing as a viable alternative, I went to the sites of several IBPA endorsed presses as well as to discussions about them on Absolute Write. As a result, I have a few questions for IBPA and the Authors Guild, questions any writer should ask before going with one of these new hybrid publishers.

Basically, their costs were high, far higher than hiring freelance editors, designers, and formatters for self-publishing. And they did not guarantee the kind of respectful treatment by reviewers and bookstores that the hybrid presses promised. While one would think “hybrid” means the publisher and the author are sharing the cost of editing, book production, and promotion, in fact, the author is bearing the entire expense, plus a markup for the publisher. One publisher charges nearly $6,000 per book, but that doesn’t include the cost of developmental, line, and copy editing and proofreading, billed hourly in a range from $55/hour for proofreading to $80/hour for developmental editing. It also doesn’t include any publicity services, which tack on at least $1,000 per book. Since the author is not obligated to pay for editing or publicity, the poorly-funded author may try to save money and create a lower-quality product that will then reflect badly on the publisher’s entire list.

Another crowdfunded hybrid publisher requires commitments of $13,500 per book, which does include editing, design, and a basic publicity package. And while the books from this publisher do look nice, the cover prices are higher than equivalent books published by traditional publishers. Again, someone seems to be making a lot of money from a writer’s misfortune, inexperience, or desperation.

So the next question to ask is if these publishers really have a mission outside pure profit, or if they vet their submissions. Yes, many of them do vet submissions and don’t publish books that are out of their scope or egregiously poorly written. But mission statements can be vague or suspicious, such as “we are an author-centered press” or “our mission is to involve the author in every step of the publishing process.” (These mission statements, while made up, are based on real ones that I’ve researched.) I strongly suggest not going with a publisher where the books are in so many genres that it would be impossible to focus on building a positive reputation in each one. I also suggest avoiding “small presses” that publish a huge number of books each month, because they’re obviously making money from authors rather than from selling any of those dozens of books to libraries and bookstores.

And finally, there’s the question of reviews. Most trade reviewers will not review self-published books, or they do it through pay services like Kirkus Indie. Will going with a hybrid publisher help your chances of obtaining a legitimate trade review from Publishers Weekly, School Library Journal/Library Journal, Booklist, Kirkus and other established publications? Yes, they review small press books — maybe not as often and not as favorably as books published by large corporate houses — but usually authors don’t have to pay for the review. (Sometimes they do. When my adult novel Dirt Cheap came out from Curbstone, which had already enjoyed favorable reviews for earlier books in the spring list, the trades snubbed this more commercial eco-thriller, and I ended up paying for a Kirkus Indie review.) I still have to research the proportion of hybrid press-published books that obtain major trade reviews, but I’ve seen too many of them end up with Kirkus Indie, and not necessarily with better reviews than those in which the author self-published directly. I worry that authors seeking a level of legitimacy will overpay for the vetting and services of a hybrid press and then find their book dismissed, derisively, as vanity anyway.

After I renew my membership, I intend to challenge the Authors Guild and IBPA to do better. I would like to see hybrid presses be truly hybrid — not to overcharge for their services so that the author is subsidizing the entire cost plus profit but to share the risk with the author. Another thing they need to do is be more upfront on the royalty share, because giving authors a higher percentage of net price rather than cover price is an invitation to chisel, as the author has no way of knowing how much the publisher actually received once production and distribution costs are deducted. Finally, these publishers need to maintain consistent editorial standards that are not options charged to authors as well as a narrower focus and mission that allows the entire list to brand itself successfully as more than “author-centered” and develop legitimacy with book buyers.

I look forward to your comments and questions!