Categories Menu
Home » Blog » What Is Your Lego Cinema Showing?

What Is Your Lego Cinema Showing?

Readers of this blog may recall that I bought the new Lego modular Palace Cinema on the day it became available to VIP members. I’ve been working on the model on and off for the past week or two and now have two of the three levels built. That has also given me the opportunity to customize some of the features of the building.

Lego purists tend not to like stickers, which often go on crooked, peel off, turn yellow, or in the case of the ones on my camper, crumble to dust because I parked the camper on the radiator. I generally put my stickers on, especially the ones for the vehicles that bear the initials of the set designers because it’s a way of honoring the designers’ hard work and creativity. I made an exception for the Palace Cinema, though, because the stickers didn’t fit in with my vision of the cinema’s place in Little Brick Township, and they didn’t allow for new films to come to town and old films leave.

Thus, I made my own. I replaced the stickers for the three movies with images of posters I downloaded and then shrunk to the size of the plastic windows. I went with three edgy international films, the Italian gangster film Gomorra, the Brazilian thriller City of God, and the Argentine police procedural The Secret in Their Eyes. City of God and The Secret in Their Eyes are some of the finest films I’ve seen, and while Gomorra had its flaws, its dystopian portrayal of Naples is as powerful an evocation of setting as I’ve seen in any film. I printed two postage-stamp-size images of each poster, cut them out, and used clear packing tape to wrap the miniature posters around each window. The glossy surface of the packing tape makes it look like the posters are behind glass. Here’s what it looks like: 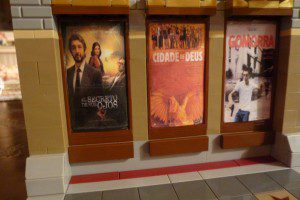 All of these posters can be easily removed and replaced when the features change. Inside of the theater, on the second floor, is an old-fashioned screen with a curtain. The original sticker featured a grainy black-and-white still shot, but I updated it with my daughter’s favorite scene from Gomorra, a massacre inside a tanning booth. This scene is held up by the plastic curtain-like trim rather than tape, so it keeps the matte surface and can be changed even more easily. 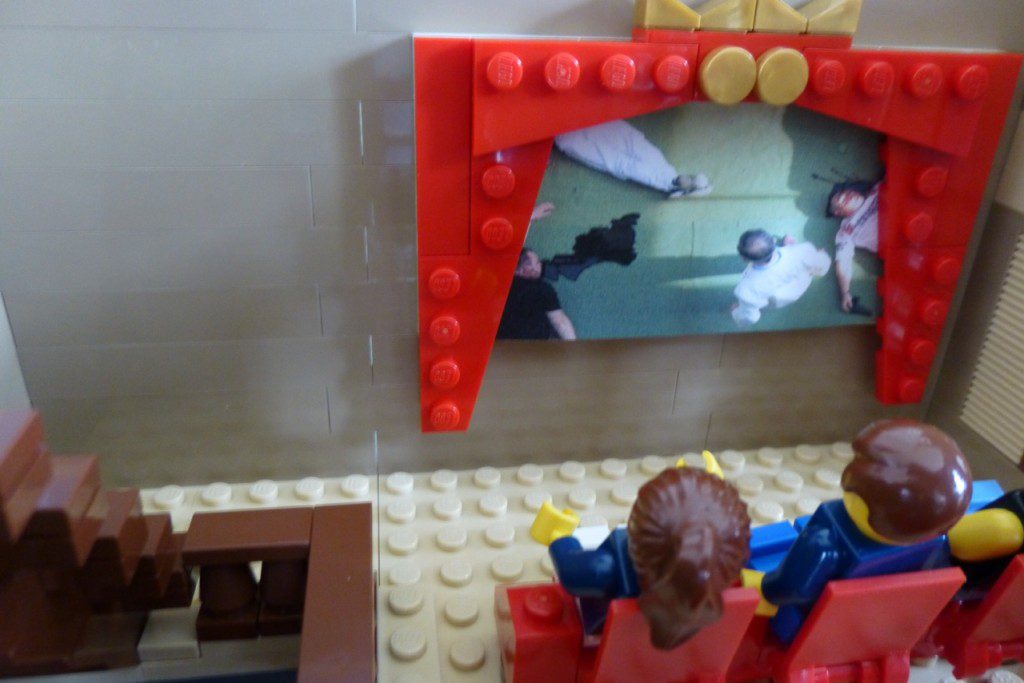 I still have to change the now-playing marquee from “Three Clicks and a Snap,” but I have other things on my plate right now, so that and the rest of the third level will have to wait.

In the meantime, my picture of “Laundry Day in Little Brick Township” continues to rack up likes and comments at the Lego Shop’s Facebook page. I’ve discovered that they’re not big fans of the edgy, though. The picture of the mayor taking bribes under cover of night didn’t get a single thumbs-up, so I doubt substituting a snuff scene for retro family-friendly entertainment will go over well.

Yesterday, however, I got an invitation to display my “art” at a show in Florence, Italy later this year. I figured the invitation was a scam, but I was flattered to think that I’ve produced art that would at least attract the notice of scammers. I mean, I just thought I was a grownup playing with toys.