When to Say Goodbye

Readers may have noticed a few days’ extra gap between my blog posts. A lot has been going on, some of which I can’t say much about at this point, and some of which is very difficult to talk about. There’s a moment in one of my books when a character experiences, within a short space of time, her greatest sorrow and her greatest joy, and often the two go hand in hand as if the universe wishes to console us at an especially sad moment, or humble us in the aftermath of a coveted achievement. 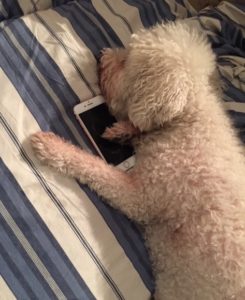 Over the years, I’ve treated readers to stories and pictures of my playful little bichon frise, Charlie. He came to our home in the fall of 2004, when we lived in the suburbs of Albany and has moved multiple houses with us. In the Buckingham Pond neighborhood of Albany, where we lived from 2005 to 2015, he chased the ducks and geese from the walking path into the water and carried on a love-hate relationship with my friend’s miniature poodle, Tula, his walking companion. When we lived part-time in the Hell’s Kitchen neighborhood of Manhattan between 2013 and 2015, he charmed tourists and locals at the Pier 84 dog park and once tried to leave the enclosure with a German tourist who he’d befriended. Who said dogs were loyal? 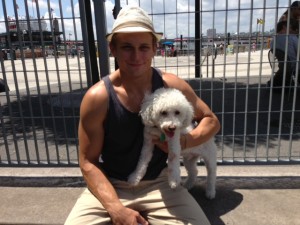 In fact, some breeds are known for their loyalty to one person, but what usually distinguishes the bichon frise is its indiscriminate sociability. Charlie adores anyone who pays attention to him. While we were in Portugal this year and our daughter’s teaching position was located too far away for her to come home and walk him during her lunch break, he went to live with one of my husband’s former graduate students and her boyfriend. They fell in love with Charlie, and he with them. This is typical for a breed that once sailed the high seas, performed stunts for the crew, and were often traded for food and equipment. 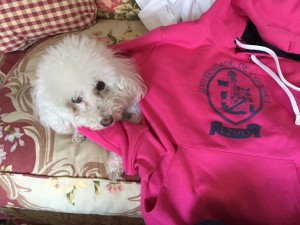 Charlie checking out what I brought back from Portugal, summer 2015.

Several weeks ago, Charlie turned 15, which is pretty much the upper limit of the bichon frise lifespan. And while he’s enjoyed good health for most of his life — walking a mile a day well past his fourteenth birthday, and running in circles with his tail stretched — his infirmities are catching up to him. Nowadays, he walks very slowly and only around the block. He was diagnosed with Cushing’s disease, an endocrine disorder common in his breed, mast cell tumors, a heart murmur, arthritis, and the beginning of canine cognitive dysfunction, also known as “Dogzheimer’s.”

This morning I took Charlie to the vet for a large lump on the skin over his ribs and to discuss his end of life care. He was due for a (non-mandatory) vaccination, and we decided that his immune system was not capable of handling it because of the Cushing’s. The vet gave me a two-week course of antibiotics to shrink the mass. If it’s an infection, it should get better, but if it’s a tumor, it will not. We talked about the procedure for euthanasia, and at what moment we decide that Charlie’s quality of life is not high enough to justify his waking up in the morning. The truth is, a lot of times pet parents put their animals through elaborate and painful procedures for the sake of the human and not for the animal. In bringing Charlie into my home, my goal has been to give him a good and happy life. 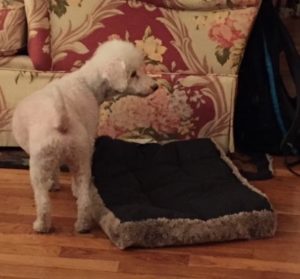 Charlie has already lived twice as long as his typical wolf ancestors. He sleeps deeply these days, and were he in the wild, a predator would have come upon him asleep and eaten him years ago. On one level, I imagine a hyena showing up and having him for a snack (he is, after all, a small dog and a lean one due to all that exercise), as it would spare me the burden of making the decision to put him down. People say he’ll “tell” us when he’s ready, and perhaps his recent friendliness toward all other dogs rather than barking and lunging at the big dogs is his acknowledgement that he will be in Doggie Heaven soon and he’d better learn to get along. Or maybe, as the vet said this morning, he knows he’s not Top Dog on the street and has come to terms with his changed status.

Charlie’s napping in the sunlight now, having rearranged our rug, his bed, and his toys. I can think for this moment that he’s the Immortal Bichon and live in this moment as all dogs do. But there will come a time, sooner rather than later, when he is no longer with us, and all that will remain are photos, stories, and memories.

Update 10/4: Charlie passed to the other side of the Rainbow Bridge last night, and now joins his canine friends, among them his best friend, Fredo the miniature poodle, after a separation of eleven years.