Categories Menu
Home » Blog » When We Lost Our Humanity

When We Lost Our Humanity

Eight years ago today a gunman entered Sandy Hook Elementary School in Newtown, Connecticut. In the next minutes he murdered twenty small children, their principal, and five other teachers and staff. Despite calls for bans on semiautomatic weapons, the result was a combination of inaction and cruelty. Parents of those killed had to put up with death threats and accusations that the massacre never happened and they were merely “crisis actors.” Some states (not Connecticut) actually loosened gun regulations, among other measures allowing teachers to bring guns into classrooms.

I was living in Portugal at the time of the Sandy Hook massacre, and my friends there expressed both sympathy and incredulity. I think about that day constantly, sometimes wondering why I returned to the United States and why my family continues to live here. My daughter teaches first and second graders — the same age as the students whose classrooms were violated on December 14, 2012. I fear for her and the students she loves. 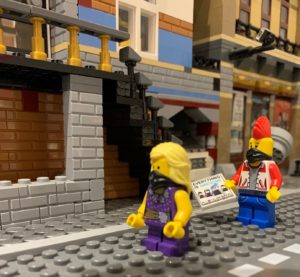 Even the Bricksters can wear their masks.

I thought about that day as sirens wailed all night long in New York City last March and April, and the rest of the country didn’t seem to care because the first people to suffer the ravages of covid-19 were urban dwellers in predominantly Democratic states — disproportionately Black, brown, elderly, disabled, and poor. Our health care workers lacked protective equipment and fell ill themselves. Now we have learned that the federal government diverted supplies and failed to invoke the Defense Production Act because the virus didn’t seem to affect them and their own. Some people believed covid-19 to be divine punishment for people with different political opinions and ways of life.

Today, the anniversary of the massacre, is also the day that the death toll from covid-19 hit 300,000, by far the largest death toll in the world and one of the highest per capita. Still, people refuse to wear masks to protect themselves and others. Masks have become a political statement, communicated from the top levels of government where those who fall ill receive costly, scarce cutting-edge treatment unavailable to the rest of us.

Last April, when experts predicted a death toll by the end of the year of 100,000 to 240,000 Americans and those in power shrugged it off, I told my husband that we lost all illusions of our collective humanity in the aftermath of the Sandy Hook massacre: Why would a country that didn’t care about the slaughter of schoolchildren care about mass death from a virus that could be significantly reduced through basic public health measures?

And what else do we not care about? We are shrugging off the deaths of hundreds of thousands of people. The president appointed a doctor to the coronavirus advisory committee who suggested that everyone in the country contract the virus in order to create “herd immunity.” At our current hospital capacity, this theory would result in 2-6 million deaths and many times that number left with permanent disabilities. (Herd immunity doesn’t work either, because antibodies decline and many people have caught covid twice.)

Our lack of outrage allows crimes against humanity. First, it’s 26 children and their educators. Now, it’s hundreds of thousands of people. What will we shrug off next? When do we admit that for many in this country — including those who call themselves pro-life — life isn’t precious but cheap? 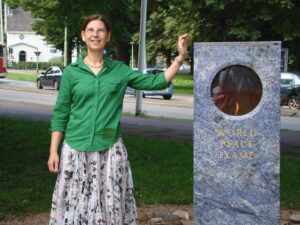 Outside the International Criminal Court in The Hague the day Serbian leader Radovan Karadzic was brought in to face genocide charges.

Are we going back to the time when people had many children because they expected few of them to survive to adulthood? We are sentient beings, with complex emotions and ties to others and with plans for the future. Our humanity is not consistent with an anthill mentality, in which worker and warrior ants are born to serve and die for a queen. This is why we have a Universal Declaration of Human Rights and a judicial process to try leaders of governments and irregular armies for crimes against humanity.

While 81 million people — a majority of the highest voter turnout numbers in history — rejected a president whose callousness in the face of the pandemic was but one aspect of an overall climate of cruel authoritarianism, we still have 74 million people who chose that path. Because of gerrymandering and a Senate that gives disproportionate power to lightly-populated rural states, the current president’s party continues to dominate despite a minority of votes. Thus the inaction on common sense gun reforms and the continued lack of disaster aid for the pandemic’s economic fallout. We need to address this power imbalance, but above that, we need a moral awakening. With a pandemic raging and a climate crisis looming, we can’t accept the mentality of the anthill, of death over life.