Wrapping Up the YASH Spring 2016 Contest (and an Unscientific Survey)

Thank you to all the people who took part in the Spring 2016 Young Adult Scavenger Hunt! The turnout was huge, including dozens of people who commented to enter my separate giveaway. Now it’s time to congratulate the winners.

Mikaela comes from the Melbourne, Australia area, the home of one of my favorite Instagram Lego photographers, @legojacker, known for his use of the minifigure to raise awareness of freedom of speech, homelessness, and the plight of refugees. Mikaela will receive a copy of Rogue from the international English-language bookseller The Book Depository.

I held a separate contest for those who commented to express their preference for science fiction, fantasy, or historical fiction. The winner, whose favorite genre is fantasy, is:

Yesterday, the Golden Warrior flew to the St. Louis, Missouri area, where Christina lives and blogs. Perhaps it will become the blog’s newest mascot.

I had an ulterior motive for my hosting a separate giveaway. I wanted to survey YA fans’ favorite genres because I write historical fiction and have friends who write fantasy and science fiction. The survey is not scientific, but it does feature the opinions of the most engaged sector of the YA reading community — people who would devote a significant amount of time to reading and possibly commenting on 20 separate blog entries for each team. And I admire the people who did it, because I started the contest for the Teal Team and gave out halfway. (Darn internet, ruining my attention span!)

3 who couldn’t decide between Fantasy and Historical Fiction

1 who couldn’t decide between all 3

I’ve heard that fantasy has peaked, but my little survey calls that into question. So all my friends who write fantasy, keep doing what you’re doing. People out there love you and want to read what you have to say.

Those of us who write historical fiction, our time has come. (Yes, I know I’ve threatened to sit on my YA historical manuscript for the next five years, but I can be drawn into the market like a discouraged 55-year-old worker with an unemployment rate at 4%.) Historical fiction has always drawn interest from teachers seeking to broaden the English and social studies curriculum, but thanks to my survey and two Lego minifigures, we now know that teen and adult readers actually like novels set in the past. 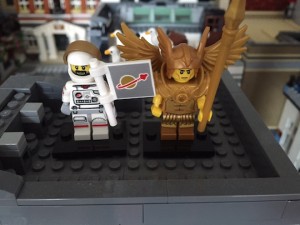 Writers of science fiction, you have a small, but hardcore, group of fans. But maybe the scavenger hunt didn’t capture your fan base as well as another competition may have. Or maybe the Spaceman didn’t have the flash and extra pieces of the Golden Warrior.

In any case, I’d like to thank everyone who took part in the spring 2016 YASH and those who entered my drawing/unscientific survey. I probably won’t be back in the fall because I don’t have another YA novel coming out anytime soon. My next project, I hope, will be a translation of a contemporary novel from Portugal that I love. I promise to keep you posted, and in the meantime, if you liked the minifigures, check out my photos on Instagram at @lynmillerlachmann.