I first met Anne Nesbet at the AWP conference in Washington, D.C. last February, when she was on a middle grade panel at Politics & Prose, a famous independent bookstore that I wanted to see and where I was meeting friends from VCFA. Immediately, I was fascinated with her then-new middle grade novel Cloud & Wallfish, the story of an 11-year-old boy who unexpectedly travels with his parents from his Virginia home to East Berlin just before the fall of the Berlin Wall and, there, befriends a lonely girl his age whose parents have gone missing. I reviewed this book for The Pirate Tree, where I wrote:

Nesbet…captures the grimness of the East German capital, the suspicions and lies that maintained a cruel authoritarian regime, and the physical and emotional costs of friendship. She narrates the story in third person, with teacher-like asides at the end of each chapter that place the scenes in a broader context. Nesbet’s voice, though, is that of a favorite teacher who fascinates her students with exciting tales of world-changing events and children just like them who have a front-row seat. This is a gripping story of intrigue and danger, but it’s also a story of friendship strong enough to survive a society built on fear, obedience, and betrayal.

After the review was published, I interviewed her by email about her background and experience behind the Iron Curtain, writing historical fiction with international settings, and specifically, the way Eastern Bloc countries addressed the education of students with disabilities (as protagonist Noah Keller has a stutter). On Tuesday, the paperback edition of Cloud & Wallfish releases, along with Nesbet’s latest historical novel for middle grade readers, The Orphan Band of Springdale, featuring an 11-year-old girl sent from New York City to Maine during the Second World War. 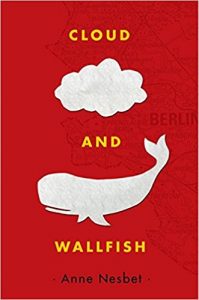 LML: Why did you choose East Berlin in 1989 as the place and time for your story?

AN: I had the good luck to be in East Berlin in 1987, 1989, and 1990, because I was doing some dissertation research (on cultural policies in the Soviet Zone of Germany after World War Two). I had lived in West Germany and Russia before that time, and I found East Germany a truly fascinating place. And I made good friends there!

One of the things that struck me about Noah and his family’s arrival in East Berlin was the cold welcome that they received. And today, while Germany as a whole has welcomed refugees from Syria and elsewhere, most of the opposition is centered in the East. Did you personally experience the suspicion, isolation, and hostility that greeted the Keller/Brown family? Why might people have been so unwelcoming then, and why have those patterns continued decades after the end of Communism?

As I said above, I made some very good friends in East Berlin! My situation was better than that of my character Noah, however, because I was older and more independent. (He does make one dear friend in Cloud-Claudia, of course.) Was everybody warm and friendly, though? No, not exactly. We (my husband came to the GDR with me in 1989) also had a lot of interactions with people whose official tasks were to find out as much as possible about us, including things like the names of our friends. In a country where surveillance and control were so important, it wasn’t surprising that we were watched carefully.

I haven’t spent time in Germany recently, so I don’t have any particular insight into the situation of refugees there today. 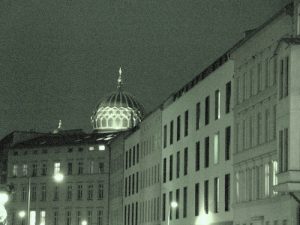 Buildings in the former East Berlin at night.

Your story features a third-person narrator with a distinct voice that comes out especially in the Secret Files at the end of each chapter. Was this part of your original draft, or did this voice evolve through the revision process?

I think this voice was present from the beginning, though of course the Secret Files (like the rest of the book) went through many drafts!

How did you research the various settings and cultures that appear in your novel—not only East Berlin but also Hungary and Czechoslovakia during that era?

I had traveled in Hungary and Czechoslovakia, and I also read whatever historical sources I could find–and spent a lot of time poring over maps on the internet!

You feature a protagonist with a disability. How did you research the speech impediment that Noah has? And how did attitudes toward disability in the Eastern Bloc contrast with those in the West?

I know I was certain from the beginning that I didn’t want to be trying to imitate Noah’s stutter in my writing in any way, and when I found out there would be an audiobook version of Cloud and Wallfish, I wrote to the company asking that the actor not imitate the stutter either. We see people reacting to Noah speaking, but I didn’t want his speech to be a spectacle for the reader, if that makes sense. My mother was a special education teacher, which may be why I realized that Noah’s mother might be using Noah’s stutter as part of her cover: providing what seems like a “natural reason” for her supposed research project comparing treatment of speech impediments in East Germany with protocols in the United States. (Noah is understandably shocked when he realizes this part of the puzzle.) I read a lot of articles from the 1980s about stuttering, to make sure what my characters thought about stuttering reflected ideas of that time. I also found out (again reading articles from the 1980s) that the German Democratic Republic did have more programs for the treatment of such disabilities than other countries in the East Bloc. 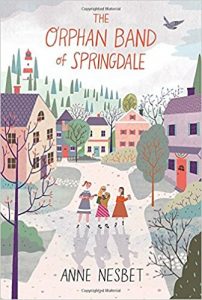 What were some of the books that influenced you in writing Cloud & Wallfish? Did you read a lot of Cold War-era spy thrillers?

Oh, interesting question! I didn’t read any books as models, as I recall. Maybe that’s why there’s a certain strangeness to the form of the book. Long ago I did read and enjoy Le Carré’s books, but I didn’t particularly have them in mind when I was writing Cloud and Wallfish.

Who do you see as the audience for Cloud & Wallfish? What would you like them to take away from the book?

People of all ages have written to me to say they’ve enjoyed Cloud and Wallfish, so I’ve had to admit that audiences for books choose themselves. I hope that readers will care about Noah and Cloud-Claudia, will be intrigued by a place and time (East Berlin, 1989) they may not have thought about much before, and will look around and wonder whether they, too, may actually be “living in history”!

Thank you for these thoughtful questions!

Thank you for your time! I look forward to reading your new book!