Categories Menu
Home » Blog » A Deadline and a Pandemic

A Deadline and a Pandemic

Sunday night, I wrote “THE END” on the draft of my part of the verse novel MOONWALKING, the story of an unlikely interracial friendship in Brooklyn in 1982 from my white character JJ’s point of view. My co-author, Zetta Elliott, and I sold the book on proposal in August 2019, and the announcements in Publishers Weekly and Publishers Marketplace came out in December, long before the Covid-19 pandemic arrived in the U.S.

Selling a book on proposal is an act of faith for author, publisher, and agent. It’s far more common in nonfiction, where an author can do so with a sample chapter, a detailed outline of the rest of the book, and an annotated bibliography of comps, or comparable titles, that demonstrate a market for the topic but not duplication. Given that authors of nonfiction often have expenses associated with the writing of the book — from research travel to photo credits, from expert readers to the need for income while writing — the advance against royalties, essentially a loan that doesn’t have to be paid back if the book doesn’t sell well enough, is essential. Fiction is more often sold “on spec,” with the writer shouldering the cost while writing the entire book, because the expenses are generally fewer and voice, characterization, and story development are important and generally not easily conveyed by an outline. That is beginning to change though, with more work sold through book packagers who come up with a detailed outline and then hire the writer after an audition process. In addition, established authors with distinctive voices often sell books on proposal, with writing samples that range from 10 pages to half of the finished book, because they’re a known quantity.

MOONWALKING sold with about a tenth of the poems written along with a two-page synopsis and a table of contents that summarized the remaining poems — essentially a chapter-by-chapter outline. I had until April to finish the initial draft of my part; the final version is due in November so the novel can be ready for release in fall 2021. It seemed as though I had plenty of time to finish — at least seven months! 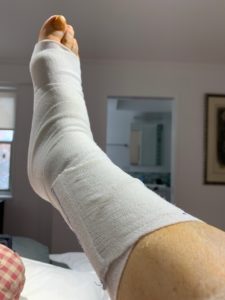 My broken ankle in late February, after the cast was removed but before I could bear weight on it.

In mid-January, with about 40% of the poems written, I broke my ankle and needed surgery. Recovery was more complicated than I’d expected — first because of post anesthesia brain fog and then because I couldn’t sit up to work more than a few minutes at a time. In contrast to my prose novels, I write verse novels by hand in pencil in a notebook, revise into a second notebook also by hand and in pencil (with a big eraser), and only then type the poems into a Word file. That helped me make progress, slowly but steadily. I’d hoped to be done by the middle of March, but the beginning of April looked more likely. Good thing I started right away and got a head start.

Then the Covid-19 pandemic hit. By early March, I’d made it two-thirds of the way through the draft. On top of spending way too much time reading the news, I came down with a suspected case of the ‘rona in mid-March, around the time the governor and mayor shut New York City down. Although I had a “very mild” case, it felt similar to my two-week ordeal with mono six years ago, though with a cough, some shortness of breath, and the terror of 1) knowing I could die, triaged out in an overcrowded hospital, and 2) our so-called president had left me to die along with my fellow New Yorkers and in fact wanted me dead due to my liberal beliefs and blue-state residency. The virus came with its own brain fog, most likely due to low oxygen levels, that hampered my productivity. On good days I wrote, but for the most part I waited until I felt fully recovered around the final few days of the month. 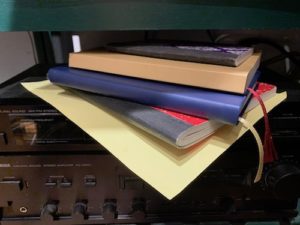 Notebooks for MOONWALKING, along with notes for another book and my stereo.

I know others have had a much harder time writing than I have. Perhaps they were sicker, had family members ill or children home from now-closed schools. A Twitter thread going around last month highlighted the great things artists and scientists accomplished while in isolation during past pandemics. Others criticized the guilt-inducing nature of that thread. (I retweeted a satiric “great isolation achievement” profile of questionable taste.) Knowing about my ankle and illness, Agent Jacqui reassured me that editors would understand a missed deadline, and she would be happy to broach the subject.

For me, though, the presence of a deadline — particularly after so many years of not having one, or a book contract that would generate one — helped me to focus on something besides my own health concerns. Writing a novel about a 12-year-old boy growing up in Brooklyn amid the graffiti and punk rock scene of the 1980s became an escape from today’s terrors, and testimony to the joy and healing power of art. For JJ — new to Brooklyn, friendless, and afraid — his growing skill at playing the guitar provides solace and encouragement. As my ankle has healed and I’ve made progress toward walking again, I’ve felt the same delight in being able to do something today that I was unable to do yesterday. Writing this novel has kept me going at a dark time. Two years from now, when Moonwalking becomes a real book, we’re on the other side of the pandemic, and (as the doctor has promised) I’m walking and running again, I will think of JJ as the imaginary friend who pulled me through.