Categories Menu
Home » Blog » A Fable for Our Time: The Queen of the Frogs

A Fable for Our Time: The Queen of the Frogs

Last month another one of my translations launched, The Queen of the Frogs, written by Davide Cali, illustrated by Marco Somà, and published in English by Eerdmans Books for Young Readers. Although Cali and Somà are both Italian, the book was first published in Portuguese by Bruaá Editora, located in Figueira da Foz, a town on the Atlantic Coast between Lisbon and Porto. It is not uncommon in Europe for authors to publish outside their home countries and languages, as many speak multiple languages and spend time in multiple countries due to work and/or marriage.

Although I translated the book last May, The Queen of the Frogs has since then become a fable for our time. The story begins on a pond where a community of frogs live peacefully, “doing froggy things — hopping and catching flies, napping and playing with dragonflies.” Then a shiny gold object falls into the water, and one frog, the fastest swimmer, snags it. It looks like a crown, and after much deliberation (and manipulation by a small group of “advisors”), the frogs declare her queen. Then:

The queen stopped talking to the other frogs. She never got her feet wet. She demanded a giant lily pad to sit on and the fattest flies for lunch. Since she mustn’t overdo it, she made the other frogs catch flies for her and her advisors, whom she kept very busy.

The pond soon becomes a very grim place, because there’s no more time for music and play; everyone must serve the queen. As this is a fable for young children, she eventually gets her comeuppance, due to the cleverness of her subjects. 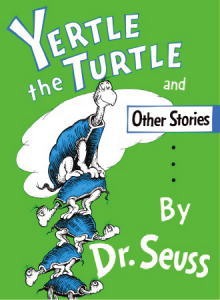 Reminiscent of Dr. Seuss’s classic Yertle the Turtle, The Queen of the Frogs explores what happens to a democratic animal society when one member with a vague or not especially relevant special talent (in this case backed up by a small cabal) takes complete power and forces the others into servitude. As U.S. taxpayers pay for the lavish golf and family vacations of a would-be dictatorial leader, an amount that could instead fund the National Endowment for the Arts, the National Endowment for the Humanities, the Institutes for Library and Museum Services, and Meals on Wheels for seniors and persons with disabilities — all four slated to be zeroed out under his budget — our own “pond” threatens to become a grimmer place. Writing before the November election, one critic questioned why the democratic frog community would so quickly come under the sway of an indolent despot. Today, I think we all have our answer.

I am proud to have been asked to translate this beautiful book, and while I wish it hadn’t become as timely as it has, it also has the ability to provide hope to readers young and old. Like the ordinary frogs and the turtle named Mack, people are creative and resourceful, and within each of us is the ability to speak truth to power and to subvert and eventually cast off the yoke of oppression.