Yesterday I took my final exam for my Portuguese class, and the day before the big test I decided to take a break from studying, justifying it to myself as an opportunity to improve my oral comprehension. (And by the way, I aced that part of the test.) I hopped on a bus to the other side of Lisbon to visit the store of one of Portugal’s best-known creator of Lego models, Pedro Nascimento.

Here’s a picture of Nascimento from a LEGO event in Lisbon. 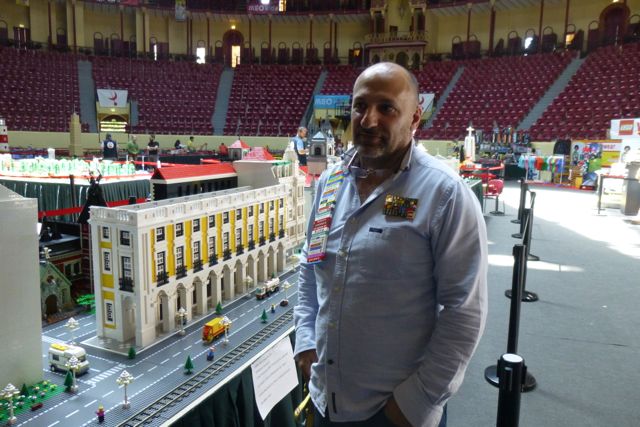 Pedro Nascimento with his model-in-progress of the Terreiro do Paço in Lisbon. The final product will take 18 months and 6.8 million pieces.

I became acquainted with Nascimento’s work the previous week, at a holiday market at the Feira Internacional de Lisboa, also known as FIL. FIL is a remnant from the 1998 World’s Fair, which also saw the construction of the Parque das Nações, the world-famous Oceanário, the Vasco da Gama 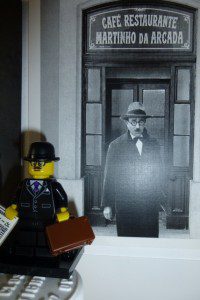 Bridge, and the Centro Comercial Vasco da Gama, which is one of the prettiest shopping malls I’ve ever seen. There was a booth for Nasclego 1962, Nascimento’s store at the top of Rua Penha de França, where I bought five minifigures, including the Series 8 Businessman, generally considered one of the least desirable members of that series but which bears a striking resemblance to Portugal’s national poet, Fernando Pessoa. Imagine the briefcase full of poems and essays, and the newspaper a literary journal, and you’ll see what I mean.

Nascimento wasn’t at the FIL that day, but the young man working there gave me his card, and after an exchange of e-mails, we agreed to meet Thursday afternoon. Before going inside his shop, I photographed his 2012 holiday display, along with a couple of closer shots because the wide angle doesn’t convey the whimsy and craftsmanship that distinguish his work.

Nascimento received his first Lego set as a present for his sixth birthday and has been building models ever since–a career spanning 45 years this February. He displayed his largest model a year ago in Madeira; it’s the city hall of Madeira’s largest city, Funchal, and it contains several hundred thousand pieces. The Funchal city hall took him 15 months to build. 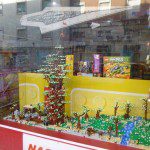 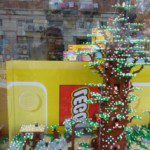 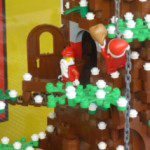 His store, which carries complete minifigure sets and individual pieces and nearly all the Lego themes (including those, like Harry Potter, that have recently gone out of production) grew out of his sharing his hobby with his twin daughters, who are now 17 years old. He said that building with Legos encouraged his daughters’ interest in science and technology, and next year both will attend university to study mathematics and physics. He showed me how he designs his models using graph paper to work out both the horizontal and vertical elements of his buildings, as well as the decorative elements. His models feature important buildings in Lisbon and throughout Portugal. I asked him if he contributed any of his buildings to the display at El Corte Inglês, featured in my post “Lego Fun” as well as on my Facebook page. He said he didn’t take part in this year’s display but put together one for 2011, which featured the Lisbon waterfront.

We talked a bit about the popularity of Lego in Portugal. He has traveled to conventions throughout Europe and the world, and he said that the Portuguese are among the biggest fans of Legos in the world. Adult builders are as common as young ones, and multiple generations enjoy this hobby together. Women are as involved as men, which is not the case elsewhere in Europe. He named the countries where women builders are welcomed on an equal footing as men, and ones where they struggle for acceptance. (The Netherlands, a country with many well-known adult builders, is one he put in the latter category.) When I asked him which of the themes in his store is most popular among his Portuguese customers, he answered that it’s the City theme — by far.

Nascimento is currently working on a book that details how he builds his models, with reference to specific works, and he hopes to have it finished by May 2013. We promised to keep in touch so that I can let people know when his book is ready. I showed him one of the graphic stories I wrote using Legos to get his advice. He didn’t notice that the Smart Car in one of the scenes wasn’t properly put together, or maybe he did and was just too polite to say anything.

Then it was back home and back to studying. Stay tuned to find out how I did on the exam.

My thoughts and prayers go out to all of the people affected by the tragic events in Newtown, Connecticut yesterday. We still don’t have many answers, and perhaps never will. Seeing from abroad this fundamental violation of the values of life and trust that bind a community together makes me ache for my country as well as for the individuals who lost so much.