A Star for Translation

I’ve been busy these past few days writing a panel proposal for the USBBY regional meeting of IBBY (International Board on Books for Young People), which will take place this fall, October 16-18, in New York City. I attended the IBBY meeting four years ago in Fresno, California, where I presented on a panel with Jessica Powers, Nancy Bo Flood, and Marge Pellegrino on the topic of children and war. I spoke about Gringolandia and met a number of acclaimed Latina authors, including Margarita Engle and Pam Muñoz Ryan. 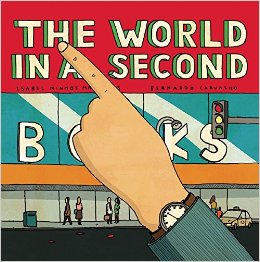 I’m still talking about children and war with Gringolandia and, now, Surviving Santiago, but my proposed panel for the IBBY meeting will focus on translation. The first book I’ve translated, The World in a Second, will be out from Enchanted Lion Books in mid-April, and I’m thrilled to announce that Kirkus Reviews has already given a star to this picture book by the Portuguese author/illustrator team of Isabel Minhós Martins and Bernardo Carvalho. In the review, Kirkus wrote,

Even as Martins’ spare text describes the action with poetic restraint via Miller-Lachmann’s translation (“In an island barbershop, a man bids farewell to his mustache”), Carvalho’s double-page spreads invite readers to linger to understand each of the 23 stories.

The World in a Second has also received advance praise from Publishers Weekly, which said, “the questions the images raise…will stick with readers.” But it was a huge thrill for me to receive a starred review.

Some authors seem to be Velcro when it comes to stars from review journals, but I’m not one of them. They are rarely given, and one can get rave reviews and awards, as I did for Gringolandia, without getting a single star from a major trade journal. So this was a special moment for me, made sweeter by the fact that the anonymous Kirkus reviewer acknowledged my work as a translator, bringing this beloved picture book from Portugal to readers in the United States. 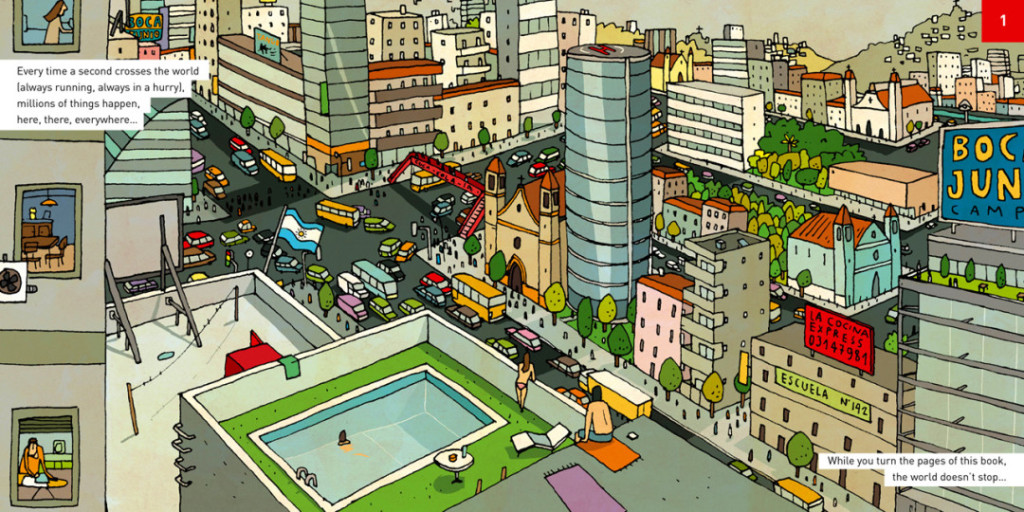 When Claudia Zoe Bedrick of Enchanted Lion Books approached me about translating The World in a Second, I fell in love with the book immediately. I feel proud and honored to have been given the opportunity to work on this amazing picture book that portrays the variety of things that happen in the same second around the world. Among them:

…An elevator gets stuck between two floors in a New York City skyscraper.

…The dogs (and only the dogs) feel a tiny tremor in a Venezuelan city.

…A thief opens a door (perhaps to his own house, it’s impossible to say).

…A watch stops at the 59th second of the 32nd minute of the seventh hour of the day. 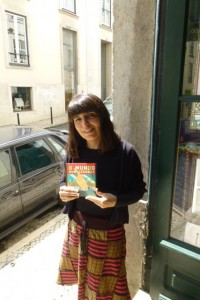 Author Isabel Minhós Martins with the Brazilian edition of O Mundo Num Segundo, which I translated to become The World in a Second.

I had the pleasure of meeting Isabel Minhós Martins when I was in Lisbon last April. We had coffee at a café near the square where the fascist government of Marcelo Caetano finally surrendered to military forces in the afternoon of the Carnation Revolution, April 25, 1974. She pointed out some of the major sites from that event.

My IBBY panel proposal addresses relationships among authors, editors, and translators. I never met the Italian translator of Gringolandia, but I thoroughly enjoyed meeting Isabel, and I believe that our continued collaboration has added significantly to The World in a Second. I am, above all, thrilled that others have recognized what to me has become a labor of love and, hopefully, the first of many more.