I just returned from four days in Houston, Texas, where I spoke on Tuesday, November 10, at Alexander Hamilton Middle School. The school had selected Rogue as the “One Book, One School” read, and it was a thrill to be at a school — a very large school at that — where everyone had read the book. I spoke at three grade-level assemblies; greeted students, faculty, and staff in the library and at lunch in the Principal’s Office (I appreciated being in the Principal’s Office for a good reason, because that wasn’t my experience growing up); and meeting parents and signing books at the Family ELA night. 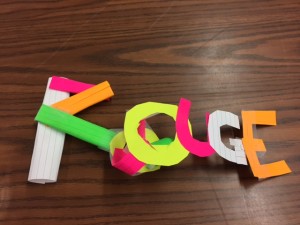 I started each of the grade-level assemblies with an icebreaker, one that I remember from my first day in graduate school at Vermont College of Fine Arts: name, and three facts about myself — two of which are true and one, made up. By a show of hands, students tried to guess which of the three facts was not true. (All three groups guessed wrong, the sixth graders by a larger margin than the others.) I gave a bit of personal history, beginning with my becoming a “writer” in first grade before I knew how to write. Because I struggled to understand the class rules and make friends with the other students, I spent a lot of time on the outside, watching. I made up my own classroom, just like my real first grade classroom, but the students had different names — names that I liked better — and I knew who was friends with whom, which kids got good grades, and which ones were always getting into trouble. Over the next few years, as I put my stories to paper, my teachers let me read them to the class, and I was able to judge whether my stories were boring or confusing. It was enlightening for me, and I think for my peers too, because I had something to offer and wasn’t just that “weird” girl. 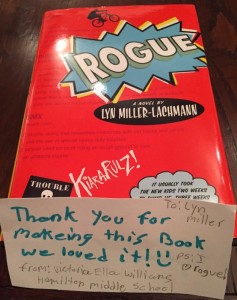 Thank you for the great review, Victoria!

My life story highlighted the role that teachers played in my development, from encouraging me to write and read to my first audiences, to serving as confidants and mentors when I struggled in middle and high school. I saw the same thing happening at Hamilton Middle School, as caring teachers seek to bring out the best in their diverse students. The most moving experiences for me were meeting several students who have been diagnosed on the autism spectrum. As I mentioned in my presentations, I long avoided writing about my experiences and struggles, preferring to write about the struggles of people I knew and observed (always the observer). My diagnosis with Asperger’s Syndrome in 2007 changed that, because I wanted to write for the person I was growing up, to let her, or him, know that we’re not alone, and finding our place in the world may be a difficult process but one worth pursuing and with great rewards. I cited Temple Grandin as an example of mentorship, as she has contributed so much to the world as both an animal behaviorist and as an advocate for persons on the autism spectrum. In Kiara’s words:

Even though I started talking at a much earlier age than Temple Grandin did, she also got into fights at school and cried when people were mean to her. When she was going into ninth grade, her parents sent her to a special boarding school for emotionally disturbed children where she learned to talk to animals, like horses that had been mistreated. When I read that part, my stomach tightens up, and I can’t eat anymore. I don’t want to have to go to a special school. And I want friends who are people. Not horses. Anyway, Dad can’t afford a horse.

I keep going because I know that if Temple Grandin wrote a book, she must have turned out all right.

I asked the students with Asperger’s about their special interests, and in the assemblies, I shared mine — my LEGO town and making up scenes and stories with the minifigures that I photograph for Instagram. I had slides of the Rogue Players — five minifigures that included Wolverine, Magneto, and Deadpool from the Marvel X-Men sets (which is why Magneto and Deadpool show up even though they have no character equivalents in Rogue) and the custom figures I made to represent Rogue and Gambit. I took these minifigures to a conference in Seattle in February 2014, and I showed slides of their time there as they saw the sights and looked for new jobs once the novel Rogue had launched. I also talked about my work as a translator, and how Asperger’s has given me a special talent for learning languages, just as Temple Grandin has a special talent for understanding the way animals see the world and communicate. It is no coincidence that she titled her book, the one that Kiara reads, Animals in Translation. 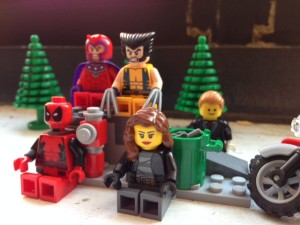 While I wrote Rogue for people like me growing up, I also wanted the book to make non-autistic children and adults aware of what we have to offer. My presentation at Hamilton Middle School had the same goal, and I was thrilled with the reception I received from the students. If they’re representative of young people today, we have good reason to be both proud and optimistic. These lovely young people promise a more inclusive future, one that welcomes people with all their differences and with a common goal to create a better world for everyone.

Thank you to the Hamilton Middle School administration, staff, faculty, and students who gave me a warm Texas-size welcome and made my visit a wonderful, unforgettable experience!