Categories Menu
Home » Blog » A Winner Speaks Out (and Congratulations!)

A Winner Speaks Out (and Congratulations!)

The winners of the National Book Awards were announced yesterday. Last week I reviewed one of the finalists, Kekla Magoon’s Revolution in Our Time: The Black Panther Party’s Promise to the People, and while it did not take home the gold, all the finalists are in fact winners. Years ago, when my publisher nominated Gringolandia (and I was told it went very far in the consideration process), I also found out about 350 books were nominated in that category per year on average. While this may have changed over the course of a dozen years, being in the top five of 350 books is a great achievement — not to mention the books the publishers chose not to nominate, which is most of them. 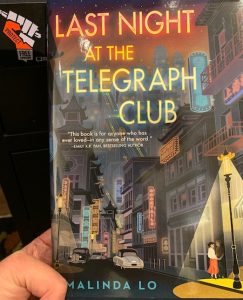 Another hold with my PEN freedom of expression sticker in the background. By the way, this cover is a winner too!

I also had the pleasure of reading the winner, Malinda Lo’s Last Night at the Telegraph Club, in January when it came out. I was especially eager to read it not only because I’m interested in historical fiction set in that time period but also because it had been a comp for a YA novel I’d struggled with for a while and ultimately set aside. I wanted to read her novel closely, to understand what the author had done right and what I could learn for my next YA project which features a secondary character from my failed book.

Last Night at the Telegraph Club was everything I expected — and more! It certainly deserves this award. Set in San Francisco’s Chinatown in the mid-1950s, with flashbacks to the time of protagonist Lily Hu’s parents and aunt, it explores Lily’s growing realization that she is attracted to girls and women. Among them are high school classmate Kathleen Miller, who becomes her girlfriend, and Tommy Andrews, the male impersonator who performs at the underground lesbian bar The Telegraph Club. Reading the novel took me back to my teenage years in Houston, when I went out with older friends to places that my parents would have definitely disapproved, places that were considered dangerous at that time, in that place. Lo weaves Cold War tensions into this story of growing self-awareness and forbidden love. Lily’s father, a scientist at a government research lab, is suspected of Communist ties because he was born in China, even though the Communists didn’t come to power until long after he immigrated to the U.S. Because of this, Lily cannot afford to get into trouble with either leftist students (including a boy who wants to date her) or the morals police. The stakes for Lily are impossibly high. 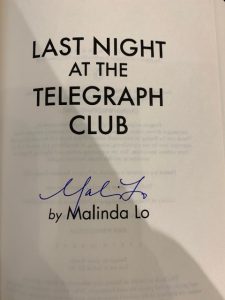 My copy is signed!

The same day that Last Night at the Telegraph Club won the National Book Award, a list of books challenged and banned by the Keller Independent School District appeared on Twitter. Some of the books had already been taken out of circulation; others, like Ashley Hope Perez’s Out of Darkness, awaited a decision (due tomorrow, 11/19). The rest were “Pending,” including Telegraph Club. A disproportionate number of challenged books had LGBTQ+ characters, themes, and authors, a pattern true all over the country.

When I saw the list, I hopped onto Google to see where in the state of my birth was the Keller ISD located. The first thing that came up was the district calendar, and the first event on the calendar — to take place tonight 11/18 — was a “Suicide Awareness Night and Community Forum.” Apparently, teen suicide “represents a real concern in our community.”

Let’s talk about this “real concern,” then. Examining dozens of studies, “The Suicide Prevention Resource Center…estimated that between 5 and 10% of LGBTQ youth, depending on age and sex groups, have attempted suicide, a rate 1.5 to 3 times higher than heterosexual youth.” Intolerance, discrimination, exclusion, and repression kill the hopes, dreams, and spirits of young people, who see no future in a place where they’re told they don’t belong. Banning books featuring LGBTQ+ characters, by LGBTQ+ authors, tells queer teens that they don’t belong.

Lily Hu grew up at a time when she had to hide her true self. Her creator, Malinda Lo, broke ground with her debut novel Ash, a queer Cinderella retelling and hasn’t looked back. She and her books have offered inspiration, guidance, and hope to so many teens. Banning her books takes that hope away from teens who have no choice in the communities where they live.

Winning the National Book Award now gives this treasure of an author a platform, one that she immediately seized. In her victory speech, she said,

I urge every one of you watching to educate yourselves about your school boards and vote in your local elections. 2022 is coming and we need your support to keep our stories on the shelves. Don’t let them erase us.

We need to speak out, forcefully and in numbers, against the people who would erase us. They rely on their intimidation and our fear, their motivation and our complacency. They are bullies, but we have our leaders and it’s time to stand tall.