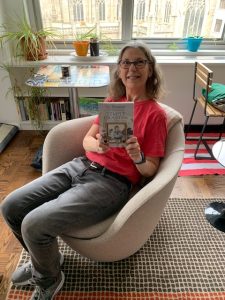 Holding my author copy of She Persisted: Temple Grandin

Last week I posted my unboxing of authors’ copies of Moonwalking, the book to be available to the public on April 12. One week earlier, She Persisted: Temple Grandin launches, but I didn’t receive my copies until this past weekend — still plenty time for some advance buzz with the actual copies. I need those copies, too, because I will be visiting a school for Launch Day, talking to second and third graders about why Temple Grandin became a writer as well as an expert on animal behavior. The school is implementing a new writing program, and I hope to inspire kids to become observers of animals and nature as a way of writing their own stories. 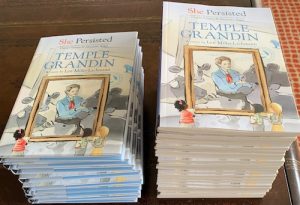 Hardcovers and paperbacks. I love the cover with her petting the cow.

The books in my box included hardcovers and paperbacks, as the series has both editions launching simultaneously. This way, schools can order class sets of inexpensive paperback editions along with a more durable hardcover for libraries. An audiobook edition will follow — I enjoyed listening to the narratives of various readers that the producers considered — and there will be other editions that I cannot discuss at this time. Publishing requires people to keep secrets for a very long time, sometimes years. 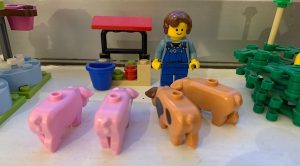 I’ve read several biographies of Dr. Grandin, but leaving aside her autobiographical writing, the others are not written by autistic authors. I’m working on a piece for the acclaimed website A Novel Mind about how an autistic biographer may view her work and life differently from one who is neurotypical. In writing a biography, especially one for young readers, one has to choose carefully what episodes from a person’s life to include. The episodes I chose are ones that resonate with me, where I have things in common with my subject, such as how she took sweet revenge on a group of men who tried to play a mean trick on her at a stockyard and why she was fired from her first job. (By the way, the sweet revenge and the firing were separate incidents several years apart.) 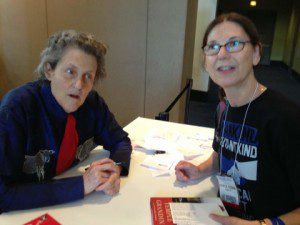 I’m proud of the work I did on this book. I wanted to select moments that would engage and entertain young readers while inspiring them to persist in attaining their dreams. The overall theme of persistence informs this book, as Dr. Grandin didn’t accept no for an answer in a profession dominated by men. Many times she went “through the back door,” her ability to think in unconventional ways leading her to creative solutions. My emphasis on her work as an animal scientist who revolutionized the treatment of farm and zoo animals is my way of focusing on her work rather than on her autism, as even she said, “When you’re a weird geek, you’ve got to learn to sell your work.”