This morning, U.S. president Donald Trump horrified the country and the world with a series of tweets that targeted “the squad” — four progressive female members of the House of Representatives who have been outspoken in their condemnation of his racism and xenophobia. He called on Representatives Alexandria Ocasio-Cortez, Ilhan Omar, Ayanna Pressley, and Rashida Tlaib to “go back and help fix the totally broken and crime infested places from which they came,” ignoring the fact that three of the four (all but Omar) were born in the US. In doing so, he utilized a racist trope that imputed the un-American-ness of people of color, one that he has used before in, for example, claiming that his predecessor, President Barack Obama, was born outside the US and his birth certificate faked.

This trope is not unique to the U.S. or to this moment in history, and the discussion around it made me think of the family heritage trip I took with my daughter last summer. Among the comments to the article in The New York Times was one by a U.S.-born resident of Denmark who’d spent two days on a guided tour of various Holocaust and Communist memorials including the Sachsenhausen concentration camp. He was disturbed to see a young man wearing MAGA gear touring the camp at the same time. 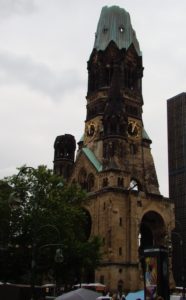 The Kaiser Wilhelm Memorial Church remains a bombed shell in Berlin, a reminder of how the Nazi regime ended.

While I don’t want to speculate as to that young man’s motivation, I noticed from the time we arrived in Berlin a number of American-English-speaking white males with lightning tattoos and MAGA gear. In fact, many of those tattooed white males were getting questioned at immigration, holding up the line for the rest of us. Not that I minded. I understood that German authorities had become increasingly alarmed at the connection between U.S.-based neo-Nazis and those who had instigated violent incidents in the cities of Chemnitz and Dresden, a couple of hours south of Berlin by car or train. Later on, when my daughter and I visited the Topography of Terror Museum at the site of the former Gestapo headquarters, we spotted several of our fellow countrymen sporting MAGA hats and poring over the sections on how the Nazis gained and maintained their power in the 1930s. They spent less time in the sections that chronicled the war and the final months of Hitler’s “Thousand-Year Reich.”

For these young white Trump-supporting visitors, the Topography of Terror Museum seemed to function more as an instruction manual than a cautionary tale, a guide for how to seize power rather than a catalogue of warning signs so these atrocities would never happen again. And this raises important questions as to the purpose of historical museums at a time in which their words and artifacts may be misinterpreted or misused to the opposite purpose of what the exhibit creators intended. After all, Hitler himself ordered the preservation of several synagogues in Nazi-occupied Europe for the purpose of establishing a museum of what he envisioned as an extinct people. 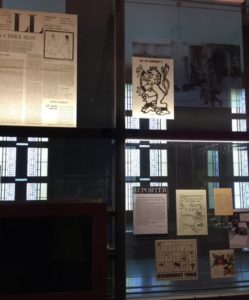 At the Vitkov Park Museum in Prague, 1968 is the turning point in what was previously a debate on Communism.

As a regular visitor to historical museums around the world — and having used their exhibits to research my historical novels — I appreciate what they offer. I am also aware that museums reflect the bias — and sometimes the ambivalence, as if in debate with themselves — of their creators. The fact that an exhibit portraying the evils of racism and genocide may one day be used by racists and supporters of genocide as a learning tool shows the law of unintended consequences but is perhaps inevitable in a world in which racists and authoritarians continue to exist. In the absence of such museums, they will likely find the information elsewhere. Those of us who teach the importance of human rights to the next generation and/or who seek to give life to the struggles of ordinary people seeking justice need these museums. Our classes and our books would be sparser without them. We — and those in the media who can amplify our message — have the responsibility to get our words and stories out there, to make sure that people who see these museums as instruction manuals rather than cautionary tales are reduced to a minority on the fringes of politics rather than the shock troops of those wielding the levers of power.