Categories Menu
Home » Blog » Celebrating a Launch and an Anniversary

Celebrating a Launch and an Anniversary 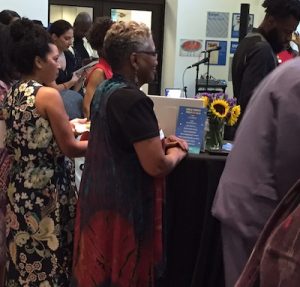 Last week I attended the launch of the anthology edited by Wade Hudson and Cheryl Willis Hudson, We Rise, We Resist, We Raise Our Voices, which I reviewed for The Pirate Tree over the summer. I arrived at the Schomburg Center just before a thunderstorm passed through to find a room already crowded with the anthology’s contributors and fans. I also saw two cakes — one to celebrate the book launch, the other to celebrate the 30th anniversary of Just Us Books, the publishing company the Hudsons founded because they didn’t see books that represented the lives of their two children, Katura and Stephon. Their children are now grown and have worked for Just Us Books, and other family members — artists and musicians — performed for the large and appreciative crowd. 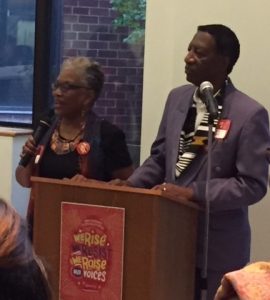 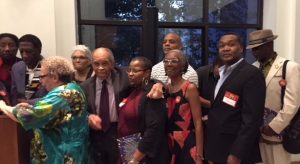 Some of the contributors. There were too many in attendance to get into one picture.

Many other authors and illustrators, reviewers, librarians, and publishing people turned out in support, and I was able to catch up with people I hadn’t seen since last spring, before I decamped to Portugal. Renee Watson gave me an update on upcoming programs at the I Too Arts Collective, which she founded at a townhouse in Harlem where poet Langston Hughes once lived. I spoke with Jo and Chris at Behind the Book, where I’ve both volunteered over the years as a writing coach and offered a workshop for other volunteers, teachers, and students through their two-year collaboration with the VCFA Young Writers Program. After gaining the experience to teach my own writing workshops through Behind the Book, I’m hoping to do more training with other volunteers in the coming year, giving them points to focus on when they coach and edit student writing. 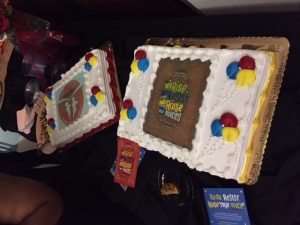 Two cakes celebrate the 30th anniversary of Just Us Books and the launch of the new anthology.

Before leaving for Portugal in May, I attended the PEN World Voices Festival where Wade Hudson and contributors Tonya Bolden, Innosanto Nagara, and Eric Velasquez spoke about the forthcoming anthology in a panel titled “What Shall We Tell the Children?” Cheryl gave me an advance copy, missing some of the illustrations, and I’m thrilled to report that the final version with the finished art is even more beautiful. This is an essential anthology for our times, a message of reassurance and hope to young people, particularly young people of color who may feel threatened, devalued, or endangered at this difficult moment. The older contributors who have lived through situations like these offer their wisdom, and all the contributors remind young readers that they are loved, that we’ve survived terrible times in the past and, working together, we will survive and overcome our current struggles as well.

I bought a copy for my daughter’s new school — she’s teaching fifth grade in Brooklyn this year — and I hope the Hudsons and some of the contributors will be invited to her school this year to offer their wisdom and encouragement in person. One of the contributors who I missed at the celebration — because she recently moved to Philadelphia and is still settling in — is Zetta Elliott, whose poem “You Too Can Fly” tells readers to:

and a single star

in the sable sky

may guide you to 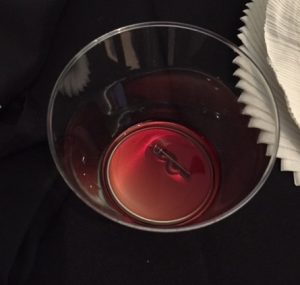 In a moment of social anxiety-induced awkwardness, I dropped my button into my wine glass. Yay me!

Zetta will be returning to New York City later this fall to launch her long-awaited middle grade fantasy Dragons in a Bag, and that is another book event I intend to attend. I’m trying to get out more to these events and rebuild my networks, though I need to balance that with getting more work done on my own novels in progress. Zetta’s new book is traditionally published, her first with a Big 5 publisher, and like her, I’m not sure I want to write that option off completely. The job that Random House Children’s Publishing did on We Rise, We Resist, We Raise Our Voices is certainly a strong recommendation for that path.