After returning from the Pneuma Creative workshop a month ago, I wrote a piece about what I learned there. Among those lessons was that I can’t revise from “a place of fear.” And so I once again rewrote the beginning, giving more attention to the autistic protagonist who, while not the point of view character in that section, plays an important role.

And I gave the revised four pages to my New York City critique group. One had seen the first and second drafts of the first chapter, which did not include these pages. The other had seen nothing at all.

They didn’t think the new pages worked either. Yes, they liked the #ownvoices character and wanted to read more in general. But they didn’t think I got into the head of the point of view character who makes a desperate decision at the end of the chapter that he thinks will protect his friends but in fact endangers them further. I’d questioned my approach as well, if only because the emotion I wanted to convey in those first four pages is…fear.

A few days before the critique group meeting, I read Jim Hill’s interview in Through the Tollbooth of classmate Robin Kirk, whose debut novel, The Bond, comes out soon from rising-star small press Blue Crow Publishing. (I also review The Bond on The Pirate Tree.) In the interview, Robin describes VCFA advisor Amanda Jenkins’s unorthodox method of helping her experience what her character goes through:

A key moment was being in a small workshop with Amanda Jenkins and having her insist that I get on my knees, with her standing over me, to really feel what it might be like to get my head chopped off (we were using Game of Thrones as a touch point). That was a turning point for me — I realized I had to let go of the “idea” of the book and start feeling it in my gut.

Robin’s words made me think about the place of fear. My point of view character has worked hard to get into university so he can give his impoverished family a better life, but he’s been denied admission due to an arrest for an act of civil disobedience some months earlier. He’s on the cusp of losing everything he’s worked for — unless he can convince those in power to give him a second chance. 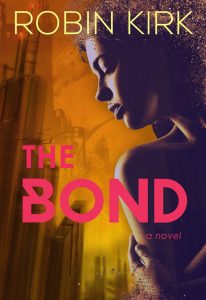 That I can lose 350 pages of a story I love over a beginning that I can’t nail serves as my point of entry to a character who faces a dead end and just a slender thread of hope that he can fix things. I also know what it’s like to screw up and have to beg powerful people for a second chance — people who have absolutely no loyalty to me or reason to help me out. Without feeling that fear, I can’t convincingly give it to my character, or show why he makes those decisions that both deliberately and unintentionally hurt the people he loves and put his closest friends in mortal danger.

One of the other things this situation shows is that writers receive a lot of conflicting advice. If you’ve ever sent a manuscript to beta readers and gotten completely opposite responses, or to agents/editors, one of whom says she loved the premise but couldn’t connect with the main character while the other says she loved the main character but found the premise cliched, you know what I mean. And unfortunately, I can’t give you advice on how to deal with conflicting advice because anything I say will sound like the “Be Yourself” YouTube video that Kayla, the main character of Eighth Grade, makes. All I can say is that writing from the heart (as opposed to putting words to a story someone else has hired you to write, which I’ve done as well and which can be fun as well as financially rewarding) is difficult and involves a lot of self-doubt and tough choices, and the more you can connect your own life to the characters’ experiences, the more painful but real it will be.

And on that note, I wish you a Happy Thanksgiving! And if you’re doing #NaNoWriMo, I hope you enjoy the experience and meet your goals, whatever they are.