The twins arrive at the nine-month mark this weekend. They’re contented little boys most of the time. They enjoy playing with their toys and listening to books when they’re not putting said books into their mouths. Jonah took his first selfie on my iPhone, and both boys enjoy seeing videos of themselves on their parents’ phones. 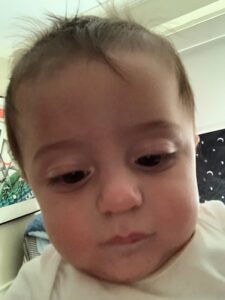 They still don’t talk yet, though they enjoy making sounds. Richard and I checked our own kids’ baby books and saw that Derrick said his first word at 7 1/2 months, and Maddy spoke for the first time at 8 months. It’s not unusual for twins’ verbal development to lag behind their singleton peers, and that’s especially true of both boys and identical twins. It seems that identical twins develop a little later in all areas, but they get there in the end.

Where the twins are ahead of their peers, though, is in social development. This has been particularly important during the pandemic, when children are more isolated from each other. The “mom and baby playtime” where I took Maddy when she was six months old? Not possible in person during a deadly pandemic. 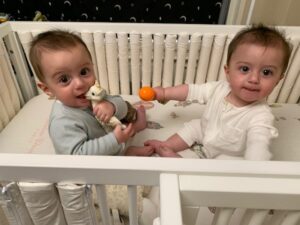 Passing the toys back and forth.

Where their singleton peers stay at home alone, or play with older siblings if they have them, Jonah and Reed have the advantage of growing up with a built-in playmate their own age. Sometimes, this leads to conflicts. But by squabbling over toys, they learn to share and take their turn. They learn that grabbing toys out of their sibling’s hand will make the sibling cry, and they learn what it feels like to have something taken away when they’re in the middle of playing with it. 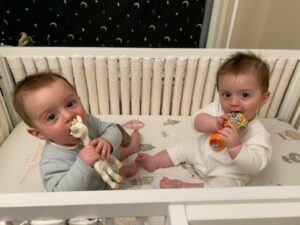 Reed (left) and Jonah play together nicely in Jonah’s crib.

A few days ago, Jonah “invited” Reed to play in his crib before bedtime. They cooed at each other, tried out the toys in Jonah’s crib, and passed the toys to each other. They delighted in passing their toys to each other, back and forth. They may not speak, crawl, or walk yet, but they are learning interpersonal skills early that will help them when they begin preschool. Since New York City has now opened preschool to three-year-olds, they will be ready to start in September 2023. In the meantime, we’re all looking forward to summer in the city, more things opening up after a year of lockdowns, distancing, and masks (which I expect play a role in babies talking later these days), travel, and visits from out-of-town relatives.