Creativity as Resistance: An Artist’s Story

Last weekend I attended the Keep Families Together March in New York City, walking with 30,000 others from Foley Square in Manhattan over the Brooklyn Bridge to Cadman Plaza in Downtown Brooklyn. We were heartened by the numbers of people who honked and waved to us as they passed in their cars. I overheard a boy, a rising sixth grader, tell his mother how proud he was to be part of this event — that whether or not his presence had an effect, he stood up for what he believed and became part of a larger movement for justice. He thanked his mother for telling him about the march and letting him come with her. 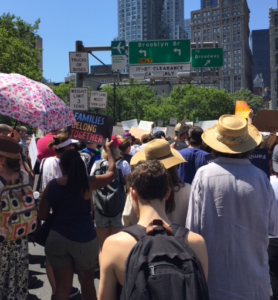 Approaching the Brooklyn Bridge at the #KeepFamiliesTogetherMarch

While crossing the bridge, I checked my Twitter feed to see pictures from the hundreds of other marches around the country. A friend sent words of encouragement directed to creative artists, many of whom are finding it difficult to work due to the present crisis. She wrote, “Art is necessary. Create Empathy, beauty. Fight the tide of darkness with light.”

I can see where many writers, musicians, and other artists feel they aren’t doing enough. Those who are successful wonder about the relevance of their life’s work when children are being ripped from their parents, black and brown, LGBTQ+, and disabled people are losing their hard-fought rights, their dignity, and even their lives, and we all are seeing the freedoms we’ve taken for granted whittled away. Artists whose megaphones are smaller or nonexistent wonder why they’re doing this at all. If no one’s watching, listening, or reading, aren’t there more important things to do? And those who look at the fate of artists in Russia, China, Turkey, Hungary, and other entrenched and newly-authoritarian states wonder how long we’ll be able to express ourselves without fear or constraint.

In Portugal this spring, I paid another visit to the Aljube Museum of Resistance and Liberation, which had a temporary exhibit dedicated to the work of visual artist José Dias Coelho. Like many Portuguese people, I knew of Dias Coelho primarily through the popular song by José (Zeca) Afonso, “A Morte Saiu à Rua” (“Death Went Out to the Street”), written after the artist’s assassination in December 1961 by agents of dictator Salazar’s secret police, the PIDE.

The wind that bends the cane in the fields
and the scythe of Portugal’s harvest
and the anvil’s sound like a bugle from the sky
go telling everywhere that a painter died. 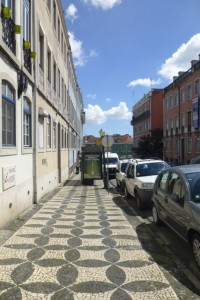 The spot where the artist José Dias Coelho was assassinated in 1961; the street now bears his name.

But Dias Coelho’s life as an artist and an activist has much to teach us, and that was the reason for the exhibition. Born in 1923, the fifth of nine children, he showed his talent and interest in art through caricatures he drew of his family members and friends while in secondary school. By that time, the dictatorship had seized power and installed itself for the long term; essentially, he’d grown up in a land without freedom. He attended the Academia das Belas Artes in Lisbon, where he became involved politically in student movements to end the dictatorship, mostly by supporting hopeless candidates in rigged elections, work that landed him in Aljube Prison for 10 days in 1949 following the losing campaign of former general Norton de Matos. In 1946, he organized an exhibition of young artists who were working outside “official” channels, as any public art, or anything published, broadcast via radio or (later) television, or performed was tightly controlled. That annual exhibition continued for ten years and helped to build connections among artists dedicated to freedom of expression and social justice. 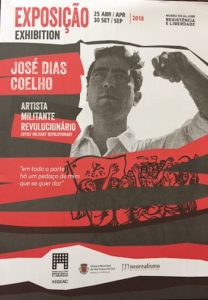 After his mandatory military service in 1951, Dias Coelho became a professor of art, completing distinguished works of sculpture, painting, and printmaking. Many were portraits of friends and family, including his companion, Margarida Tengarrinha, who he met at Academia das Belas Artes and with whom he had two daughters. He joined the Portuguese Communist Party, at that time the only organized opposition to the dictatorship and the primary support base of doomed electoral candidates such as Norton de Matos and in 1958 General Humberto Delgado. In 1952, Dias Coelho lost his teaching job in a government crackdown on political opponents. He went to work for an architectural firm while creating art on the side, art with very limited possibilities for sale or exhibition because of the repression.

With no possibility of teaching or showing his work openly, Dias Coelho turned his talents in 1955 to the clandestine struggle. As a graphic artist, he was uniquely able to create fake but convincing identity cards, passports, drivers licenses, and bicycle licenses for people who needed to go underground or to escape the country. This was not the life he’d hoped for; as Tengarrinha wrote after his death it was:

obscure, monotonous, closed, so different from his work as a sculptor and his habit of getting together and sharing ideas with artists and intellectuals in the active cultural life of Lisbon then. (Margarida Tengarrinha, “José Dias Coelho — A morte saiu à rua”. Translation mine.

Even so, he continued to create his art, to show pieces in the young artists’ exhibit, and to make woodcuts published in underground newspapers until his death at the age of 38. His work, that of other artists, musicians, and writers such as José Saramago (who submitted his second novel Claraboia — in English, Skylight — to publishers in 1953 and the editors never responded until the 1980s, long after the end of the dictatorship and after he’d become famous with his many books written from the mid-1970s on) are models of creating in perilous circumstances, without any guarantee that their work would find an audience or that finding that audience wouldn’t put them in even greater danger.

For those who are trying to create in these difficult times, it’s important to know that writers and artists have done so in the past, often in far worse conditions, and they have used their abilities in a variety of ways in the service of resistance. I hope the situation in the United States — or any other liberal democratic country threatened with or facing its loss — doesn’t get to the point where artists must make the same choice that Dias Coelho did. My own choice has centered on writing about that history, to show the warning signs, how people survived, and how they fought back.

Your turn: how do you create in difficult times, and how do you address the current situation in your work?