Fourth Star for TORCH and a Giveaway

Happy New Year! My new year began with a fresh review of Torch, from School Library Journal. I haven’t had much luck with SLJ in a while, but this one turned out to be…another starred review! And a lovely one at that! The reviewer focused on the relationships between Pavol and his three best friends:

Expertly interweaving multiple perspectives, Miller-Lachmann gets the balance right between the universality of survivor’s guilt and the specificity of the historical period. Pavol maintains his identity as the group’s moral center — he is idealistic and fallible, a hero and a boy in pain.

And the reviewer concludes by calling Torch, “A masterful, taut, and emotionally rich historical novel that is heartrending and essential reading for our present political climate.” 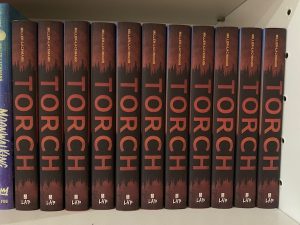 Torch on my shelf next to Moonwalking, another multi-starred novel.

At this point, all of the major first-line reviewers — Kirkus, Publishers Weekly, Booklist, and School Library Journal — have reviewed Torch and given it a starred review. It’s a particularly gratifying achievement for a book that’s not big-budget, that didn’t come from a Big 5 or other major East Coast imprint. I thank the editors of these journals for giving my book a chance!

I’m also especially thrilled because I’m not considered one of the “cool kids” of YA. First of all, I’m old enough to have lived through a time that even in the adult world would be considered historical fiction. Granted, I wasn’t the same age in 1969 as my teenage characters in Torch, but I could have been one of Pavol’s younger sisters. As a result of my experiences both growing up as a middle and high school social outcast and today, I strongly believe that the YA popularity contest does a major disservice to teen readers. Yes, there are many teenagers who want books that reflect their experiences of parties, romance, and sports and social competition. I appreciate books by authors who are self-aware enough to portray through a critical lens autobiographical protagonists tormenting socially awkward outcasts in the hope of being accepted by the school’s social elite, as Christina Soontornvat does so well in her recent graphic novel The Tryout. 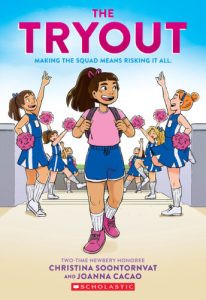 Yet it’s important that all teen readers see themselves as the heroes in their books. That includes not only BIPOC and LGBTQ+ teens but also ones with disabilities who often experience bullying and exclusion. It includes teens who are bullied and excluded because of difficult family circumstances, leaving them without the money to take part in activities and/or busy dealing with adult-level responsibilities and trauma.

Finally, the emphasis on popularity also leads to the dominance of certain genres, leaving those who like unfashionable genres with fewer options. When I signed Torch at the NCTE conference, many of the people in line were teachers who told me that their students are becoming more interested in historical fiction but don’t have as many reading choices as fans of other genres. There’s one very popular author that everyone has read, but what if kids want to read another book like it? Or a book like it that has LGBTQ+ and disability representation, because queer and disabled/neurodivergent teenagers have existed throughout history…and have had agency? 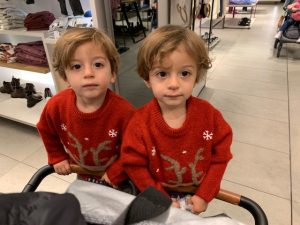 Jonah and Reed at their great-grandma’s in Houston.

If you’ve read this far, thank you! I have a treat for you too! For the new year, and to celebrate the support Torch has received from book critics, I am giving away a free copy (sorry, US only because of high postage costs) to one lucky commenter below. I’m not making you go to another site to sign up. I will choose the winner the old fashioned way: write down all the names of commenters on pieces of paper, put them in a hat, and let one of my adorable grandtwins pick a paper out of the hat. Wait — did I say twins? Yes! And they’re each going to want to pick a name, so I’m giving away books to TWO lucky winners! The drawing ends in two weeks, on Wednesday, January 17.