Just a reminder that the drawing for Torch closes in two days, on Wednesday, January 18, and you need to comment on the blog post to be entered. Because identical twins are drawing names from a hat, there will be two winners.

Last week I met author Kip Wilson and her daughter for lunch at Ukrainian restaurant Veselka in the East Village, and from there we walked to the International Center of Photography to see the “Death in the Making” exhibit, featuring the Spanish Civil War photographs of Robert Capa, Gerda Taro, and Chim. Kip is the author of the verse novel One Last Shot, an exploration of the life of Taro, who was killed at the battle of Brunete in July 1937, just days shy of her 27th birthday. It’s her third verse novel, following the highly acclaimed White Rose, based on the life of Sophie Scholl who with her brother and friends were executed for resisting the Nazi regime in Germany, and The Most Dazzling Girl in Berlin, a fictional story that takes place in Berlin’s queer nightclubs in the last days of the Weimar Republic. 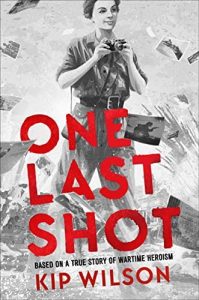 I say “exploration of the life of” rather than “biography” because, while Kip based the novel on extensive research and testimonials from the people who knew Taro growing up (when she was Gerta Pohorylle), the book imagines dialogue and internal monologue that are not part of the written historical record. Nonetheless, the poems capture the era of interwar Germany and Hitler’s takeover as it affected a prosperous Jewish family and drove a wedge between Gerta and her non-Jewish best friend, Meta. The poems also portray the developing romance between Gerda (who changed her name while living in Paris to obtain job opportunities not available to Jews) and Robert Capa (born Endre Erno Friedmann and changing his name for the same reason). Gerda was the love of Robert’s life and she shared those feelings but also chafed against the restrictions she faced as a woman artist, the push toward invisibility that ran against her outspoken nature. Her desire to be seen as a war photographer in her own right, as well as to convince the world to ally with the antifascist cause represented by the Republican side in Spain, drove her to take risks, push herself in the direction of the battle, and stay long after others had retreated. At a time when the forces of democracy represented by the Ukrainian people are in deadly conflict with an imperialist regime that blends the worst of fascism and communism, One Last Shot is more timely than ever. It honors those who don’t let the rest of us turn away or forget. 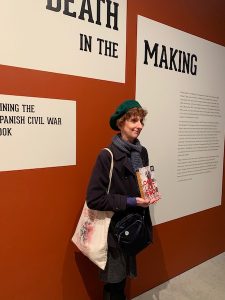 Kip shows off her newest book at the “Death in the Making” exhibit at the International Center of Photography.

Because this blog began as a guide for travelers to Portugal and became a source for travelers to New York City as I’ve been grounded for various reasons, I’d like to recommend the International Center of Photography to both tourists and “tourists at home.” Its current home, to which it moved during the pandemic, is at 79 Essex Street on the Lower East Side, across the street from food court and community center Essex Crossing. The ICP was founded by Robert Capa’s younger brother Cornell (born Kornél Friedmann), who followed him into the field of photography. Cornell co-founded Magnum Photos, a prime agency for photojournalists, and co-founded the ICP in 1974 in large part as a way to honor his brother’s legacy. Robert was killed by a landmine in 1954 while covering Vietnam’s war of independence against France. The ICP features exhibits that emphasize the role of photography in portraying our shared human history and offers classes for budding photographers of all ages.

Whether or not you visit the ICP or check it out on the internet, definitely get your hands on One Last Shot. It’s a powerful story, beautifully written, with so much to say about our lives today.