Next week the inauguration of our new President Joe Biden and Vice-President Kamala Harris will take place despite a violent coup attempt at the Capitol on January 6 and further threats from the outgoing president’s far-right/white supremacist allies. It also marks the first anniversary of my breaking my ankle, an event that began my confinement to my apartment with occasional sojourns outside. 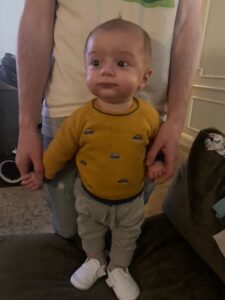 Speaking of taking steps, Reed is getting ready!

Had it not been for the covid-19 outbreak, I would have begun taking steps outside at the end of March and regularly attending physical therapy sessions. Over the summer, I did walk the 24 blocks each way to the physical therapy center, using my cane and wearing a mask. In fact, the warm weather of summer and early fall allowed me to take advantage of what New York City had to offer — outdoor dining, impromptu concerts in the park, protests for Black lives, a celebration of Biden’s win. My husband and I were more confident of meeting our children both outdoors and inside when the horrific initial wave had burned itself out and the test positivity rate in the city was under 3%.

After the holidays, with the positivity rate approaching 10%, we have to be more careful. We haven’t seen the babies in several weeks and have to make do with the photos and videos they send us. We hope that Maddy, an elementary school teacher leading her classes in person, will get her first vaccination scheduled for Tuesday. We’re nervous about the appointment being cancelled because we’ve heard that the reserve of vaccines supposedly held by the current regime has in fact vanished — or never existed in the first place — and the city will run out by the end of next week. 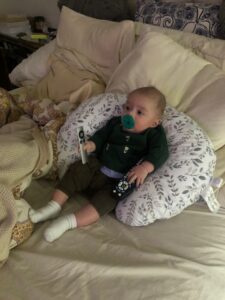 Like me, Reed is watching a lot of TV!

Except for our daughter, the rest of us are at the back of the vaccine line. That means our annual trip to Portugal in May will again be scrubbed. They’re having their own problems with a massive outbreak, possibly caused by the new, more contagious UK variant. (There’s a lot of travel between the UK and Portugal, even post-Brexit.) As a result, the university in Lisbon has moved all their classes online. I don’t think we’ll have the vaccine in time to go anywhere else for the summer, so the earliest we can travel is winter 2021. Since I’d hoped to conduct research abroad, I’m now shuffling projects and prioritizing ones that don’t involve research I can’t do from my home computer and internet connection. The filmmaker biographies are ideal at this point because I have lots of time to watch movies on my computer and new Smart TV, and I do most of the research online. I’ve discovered that access to US-based reference materials is difficult from other countries, so it’s full-speed-ahead on this project while I’m stuck at home.

Now that my ankle has fully healed, I’m running in place to get exercise. I sometimes go out for a walk, which is significantly less pleasant now that the weather is cold, additional businesses have closed, and inconsiderate people are still running around without a mask or wearing their masks improperly. I’ve learned that there are a lot of anti-maskers, including loudmouthed MAGA types, even in “liberal” New York City. In fact, a white-power terrorist with a significant arsenal was arrested in Middle Village, Queens yesterday after threatening to assassinate newly-elected Georgia Senator Raphael Warnock and local officials. 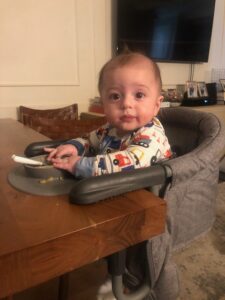 In the meantime, Jonah is enjoying his mashed bananas.

While I’m getting a lot of work done and waiting to hear on some new and exciting proposals, it’s hard not to get depressed seeing the same four walls every day and knowing it’s going to be months before we can go outside again on a regular basis. I know a lot of you, dear readers, are feeling the same way. We are not alone. Throughout history many people have been confined in order to save their lives, while living with the uncertainty that this indefinite confinement may not even work. The most famous example is Anne Frank, a Jewish teenager who lived in an attic in Amsterdam with her family and their acquaintances for 761 days before a neighbor betrayed them to the Nazis.

With a new strain of covid-19, we too wonder whether our sacrifice will amount to anything. While the virus is not the same thing as a war or a systematic genocide, it’s deadly, and many of the survivors endure long-term disabilities. The outgoing government’s incompetence, corruption, and malice — from the withholding of critical supplies to the encouragement of violent anti-maskers — has shaken our faith in the goodness of our leaders and fellow citizens as much as the related rise of far-right paramilitary groups in support of said government. I hope that when we’re able to meet both outside and indoors after a successful vaccination campaign, this face-to-face contact will strengthen the bonds of our communities and provide an antidote to the extremism that results from loneliness, boredom, isolation, and fear. I, for one, look forward to getting out of my apartment and moving around my city and the world. 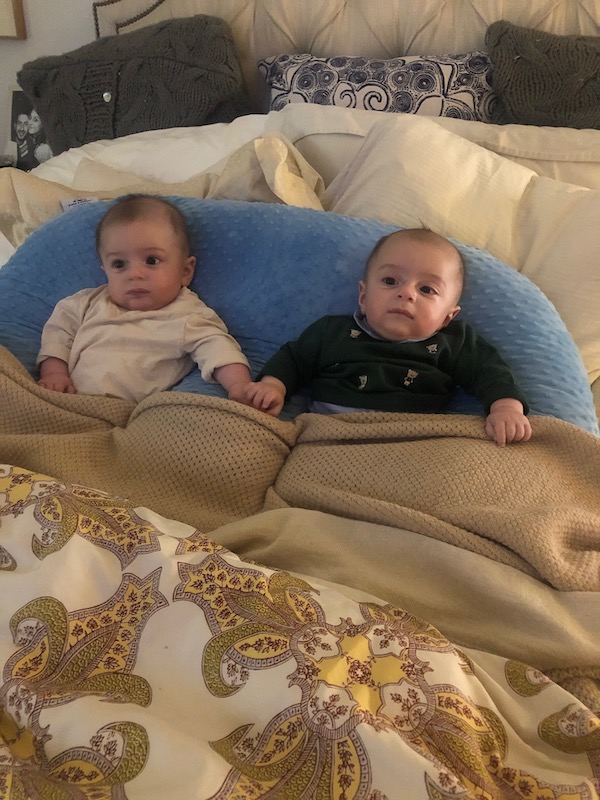 Jonah and Reed watch the returns from the Senate runoffs in Georgia. Dad, an Emory graduate, was very happy.