Categories Menu
Home » Blog » How to Break into Translation: A Report on the Bridge Series Panel

How to Break into Translation: A Report on the Bridge Series Panel

Last Tuesday evening, I traveled through a windy deluge to the Center for Fiction to attend the first panel in the four-part Bridge Series on Translation, co-sponsored by the Center for Fiction and PEN. This panel, titled “Breaking In,” featured five panelists who offered advice to a full house of attendees, many of them students or beginning translators. Because of the inclement weather, several people asked me to summarize the panel on my blog. 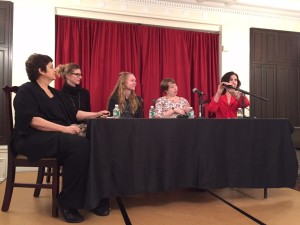 The first question explored how each panelist became a translator. Newman fell in love with the language and with the work of author Quim Monzó; her agent helped her break in. However, her translation of his novel O’Clock was published in 1986, and it took her more than 20 years to sell another translation of his books to a US publisher. Cleary became a translator while a student in a Ph.D. program in literature, a move suggested by her advisor. Jensen was a freelance journalist who turned to translation to earn extra money. Charette, who studied French in college and graduate school, started by working for agencies specializing in commercial translation. Powell initially worked for a publisher and moved from editing into translation.

After describing their diverse backgrounds, the translators discussed whether it’s necessary to have a MFA. The short answer was no, but the programs are useful for developing one’s writing craft and building connections. MFA programs tend to focus on the artistic side, less on the business aspects of writing (something I found as a student in the MFA program at Vermont College of Fine Arts). Still, those who attended MFA programs appreciated the workshop structure, in which each participant translated a piece of importance to them, and the others critiqued the word choices and overall flow. “I realized my first drafts weren’t very good,” one of the panelists said.

The next question had to do with mentors. Cleary thanked her mentors in graduate school for going through her abysmal first drafts. Besides advisors in academic programs, there are other places to find mentors. ALTA, the American Literary Translators Association, has a mentoring program. Many translators are willing to serve as informal mentors because they want to promote literature in translation and encourage more people to become translators; all a newbie needs to do is email and (politely) ask. Editors can also serve as mentors, particularly editors of small magazines and presses that specialize in translated literature. For instance, Jensen had her first translations published in an indie journal, Asymptote, because she worked for the journal as an editor-at-large. Sometimes she’d solicit work from Danish writers who didn’t have an English translator and offer to translate their work. Her translations were then accepted for publication and edited by her talented colleagues at Asymptote. In the Q & A, I asked what new translators could expect from a mentorship. The panelists said mentors may offer to read a certain number of pages, make suggestion to improve a translation, answer general questions about an approach to a translation, and connect a new translator to appropriate publications. In approaching a potential mentor, a new translator should ask him/herself the question, “What do I need to learn?”

Several of the panelists have started publications or institutions related to translation, and the moderator’s next question had to do with these. Newman is the founder and director of the Farragut Foundation for Catalan Culture in the U.S. Her starting a nonprofit to create awareness of Catalan culture grew out of her experience of waiting 20 years before she found support to translate another Catalan novel. Cleary is the founding editor of the bilingual Buenos Aires Review, which helps Argentine writers to connect with the U.S. literary marketplace. Charette founded the Emerging Literary Translators Network in America (eltna.org) to support early-career translators. Powell, from PEN, pointed out that we translators are spokespeople for the language that we translate and we should be prepared to take on this advocacy role. 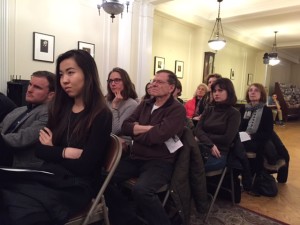 A full house, despite a driving rainstorm outside.

Powell asked the panelists if translators can make a career. Jensen knows translators who receive funding from Denmark’s cultural ministry and organizations. Those who translate the languages of less well-to-do countries (but ones where the literature may be interesting in the way it addresses economic crisis) can look for editing or other employment with publishers as well as commercial or academic translation. Some translators hold academic positions, but these can be a problem if the department doesn’t consider a translation a publication on par with scholarly articles.

Powell’s final question had to do with mistakes and things the panelists haven’t figured out yet. Newman listed fees, especially if we really want to translate the book. She used to accept lowball fees and cited Archipelago Books, a nonprofit small press as a publisher that pays translators fairly. She also talked about the difficulty of getting reviewed. Jensen spoke about how she had to learn to promote the book she worked on, as an advocate for the author, the publisher, and literature in translation in general. Later on, the panelists talked about the need for review outlets to name the translator (there’s even a hashtag #namethetranslator) and evaluate his or her work.

There was time for audience questions, and the attendees asked excellent questions. The first had to do with choosing a language to translate, if one is fluent in several. There’s less competition for people fluent in less commonly spoken languages, but even a translator from French can find work because there are more books coming out in that language. In any case, the community of translators tends to be supportive rather than cutthroat.

This was a very good thing for me to know, because I come from an area of literature which has become very cutthroat due to its connection to popular and youth culture and the large sums of money available to a few authors while the rest struggle to stay in the field. (And it’s not only authors — the positions for editors are shrinking as well.) It seems that the need to grow awareness of translation and the number of books in translation has contributed to an atmosphere of solidarity and support, as translators work together for the benefit of the entire profession.

Finally — and this is something else I’ve written about frequently — an audience member asked whether it’s better to start out with a small press or a major house. The panelists agreed that a small press is a much better place for a translator. Small press editors are committed to translation and to working with translators (as I’ve certainly found with Claudia Bedrick at Enchanted Lion) and can mentor someone early in his or her career. Small presses are more willing to consider a wider variety of writing from other countries, including the passion projects of their translators. On the other hand, the major houses decide on one big-name author and one translator at a time, and that’s all they’ll promote. If they do take on a second or third project, it may disappear for lack of marketing effort. The panelists emphasized that for literature in translation, small presses are NOT a fallback if a major house turns the project down but rather a first choice. On the other hand, Powell pointed out that translators shouldn’t write off major corporate publishers entirely because they do have superior distribution and some editors there understand and support translation. Once a translator has a platform and experience, he or she should consider approaching a major publisher with an international author the publisher may want to commit to.

An audience member asked about how to navigate the world of rights, and we were invited to a future Bridge Series panel on that topic. So tune in for more next month, and the month after that!